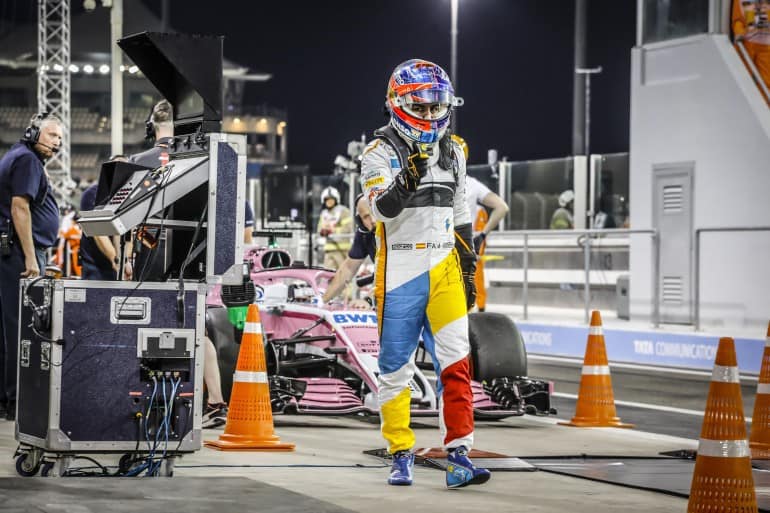 Lewis Hamilton did not win a race in the three starts of the Formula 1 season.  On Sunday at Yas Marina Circuit in Abu Dhabi, he finished with a consecutive win to close a season when he won his fifth drivers title.  The win was his seventh in the last ten races and 11th of 2018 and gives him 73 for his career.

Sebastian Vettel drove his Ferrari across the line 2.5 seconds behind Hamilton and Max Verstappen, who had dropped to as low as 10th after a difficult start from his sixth position, continued his spirited and successful second half of the season by taking the final step on the podium.

Daniel Ricciardo followed his Red Bull teammate to the fourth spot while Valtteri Bottas, who had held the second position with 20 laps to go, suffered through severe tyre degradation and completed the race in fifth.

The race began with Hamilton pulling a strong start and racing ahead of his teammate Bottas.  It looked like another cruise for the Brit for a second but contact between Nico Hulkenberg and Romain Grosjean that sent Hulkenberg off in a roll, brought out a safety car.  Once the race restarted, Ferrari’s Kimi Raikkonen, in his last drive for the Maranello organization, pulled over with reliability issues which brought out a second safety car.

Only Lewis Hamilton pitted with the SC opportunity and used the strategy to drive his super soft tyres to the max and benefit when everyone else pitted during the race.  He cruised in the latter stages as he managed his tyres and only felt any sense of competition in the closing laps as Vettel used fresher tyres to close a seven-second gap to about two seconds.

This season had passed in a pretty safe fashion with no wrecks really standing out.  That’s not to say there haven’t been a few moments, like when Charles Leclerc wound up bouncing off of Fernando Alonso’s Halo, but otherwise things have been somewhat quiet.

Nico Hulkenberg has had a rather unremarkable season, as Renault has been middling all year.  He was battling Haas F1 driever Romain Grosjean when the two came together in turn seven.  Hulkenberg’s rear wheel hist Grosjean’s front and the contact sent Hulkenberg into a barrel roll that ended with him resting in the car, almost upside down, at the barriers.  He walked away from the incident and it showcased how formidable the cars are and how the continued efforts to make racing safer has worked.  Congrats to everyone for being able to walk away from the 2018 season.

– A brief desert rain shower came in the middle of the race, laps 24-27.  The rain never affected anyone’s strategy, however, as it was localized to the turn seven sector of the track.  It did, however, bring a bit of an oddity and forced teams and drivers to navigate an unforeseen obstacle.

– The middle of the finishing order featured a grouping of relocating drivers.  Though Ricciardo led the race for 16 laps, the tyre strategy never came to form and he could manage only the previously mentioned fourth.  Carlos Sainz came in sixth in his final drive for Renault before moving to McLaren for next year. Charles Leclerc, who will be leaving his home at Sauber and will be moving to Ferrari, took the seventh spot.

– Fernando Alonso ended his (current) F1 career with a ho-hum 11th place.  That finish may be unspectacular but for Alonso and McLaren it was really about the best they both could expect.  Alonso’s career is a notable example of ‘what if’ as he is considered by most people to be one of the best drivers ever but has suffered through a stint at Ferrari when the Italian team appeared lost, then these past few years with a McLaren team that has had no identity and seem lost with no working plan to bring the organization back anywhere close to its previous heights.  The two-time champion is moving on for next year but that doesn’t mean he won’t return.