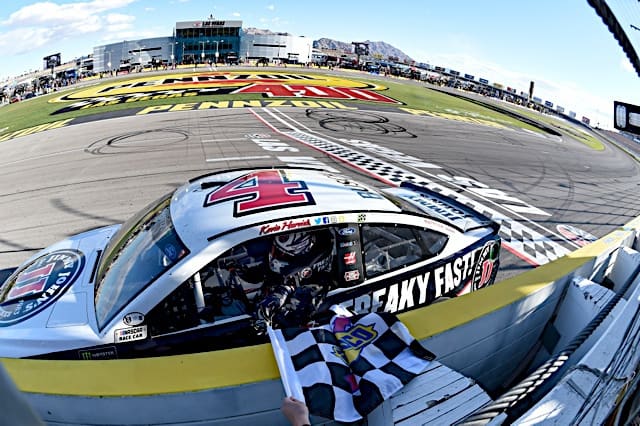 The Monster Energy NASCAR Cup Series begins their ten-race playoff this weekend at Las Vegas Motor Speedway. 16 drivers will begin their quest for the ultimate prize, a series championship starting with the inaugural South Point 400.

Also, with only 0.1 points awarded for each lap led by a driver, the need for a dominator is less important when building a winning lineup. The 267-lap race will only have a total of 26.7 points up for grabs in this category. Take note when building your roster and focus on midpack drivers who can climb up toward the front on race day.

Kevin Harvick had his way with the field at Las Vegas back in March. He started on the front row,  took the lead by the second lap and never looked back. The No. 4 car led 214 of 267 laps en route to his second win of the season. It was also his second win in four Las Vegas races.

There is no reason not to think that Harvick will do that again this Sunday and guarantee himself a spot in the next round of the playoffs.

Kyle Busch sealed the regular season points championship at Indianapolis Motor Speedway last weekend. That means he has a healthy points buffer heading into the first round of the playoffs (47 above the cutline). He will also be a heavy favorite to win this weekend.

Busch was the runner-up to Harvick in the spring race at Las Vegas. While Busch wasn’t nearly as dominant, he did lead 10 laps. The driver’s totaled three top-five finishes in the last five Vegas races and always runs well at his hometown track.

Since taking over the No. 78 Furniture Row Racing machine, Martin Truex Jr. has been one of the best to race at Las Vegas. In his five career starts for the team there, he has an average finish of 6.4, including a win in 2017.

Truex has fallen off a bit lately, but this will be a great weekend to rebound, despite his team’s announcement that it won’t continue in 2019. The news may also make him slide under the radar in fantasy but don’t be fooled.

There is no driver with more momentum heading into this race than Brad Keselowski; after all, he has won the past two races. Granted, both wins at Indianapolis and Darlington Raceway fell into his lap, but they should not be overlooked. Crew chief Paul Wolfe is one of the best in the business when it comes to thinking outside the box.

At Las Vegas, Keselowski is on a six-race top-10 streak, including two wins and two additional top fives. Priced well below the other top-tier drivers, expect him to be a popular choice this weekend.

Through four career Cup starts at Las Vegas, Ryan Blaney has the best average finish among all active drivers. He ran fifth there in the spring after earning the pole and never fell far from the front.

Blaney has three top 10s in the four races he has run at Vegas; it is expected that he will continue his streak. This race could be the one where he finally finds Victory Lane in 2018.

Like Blaney, Erik Jones has found success at Las Vegas early in his career. He debuted with a 15th-place finish after starting inside the top 10. He followed that up with an eighth-place result back in March, his first run there driving the No. 20 Joe Gibbs Racing Toyota.

Jones has been running at a high level as of late, turning himself into a weekly threat to win. He should be a top-five driver this weekend and also put a scare into the other main title contenders.

Paul Menard is the bargain driver to keep an eye on this weekend. His Las Vegas career started off rocky (finishes of 32nd, 22nd and 35th) which also inflates his average finishing position. However, he has been much better since then.

When Menard made the move to Richard Childress Racing a few years back, he became a perennial top-10 driver on intermediates. He continued that this season with a move to Wood Brothers Racing, finishing ninth, his best finish at Las Vegas since 2014.

Ricky Stenhouse Jr. is priced among the scrubs this weekend, which makes him an almost instant start. He has finishes of 12th and 14th over the span of the past three Las Vegas races, well worth the $6,200 asking price.

When looking for cheaper drivers for salary relief, it is important to target those with any amount of upside; Stenhouse has that this weekend. Roush Fenway Racing showed major improvement Monday at Indianapolis, and if it can carry over to this weekend, Stenhouse could be a surprise. 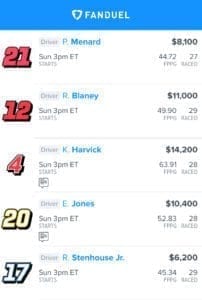