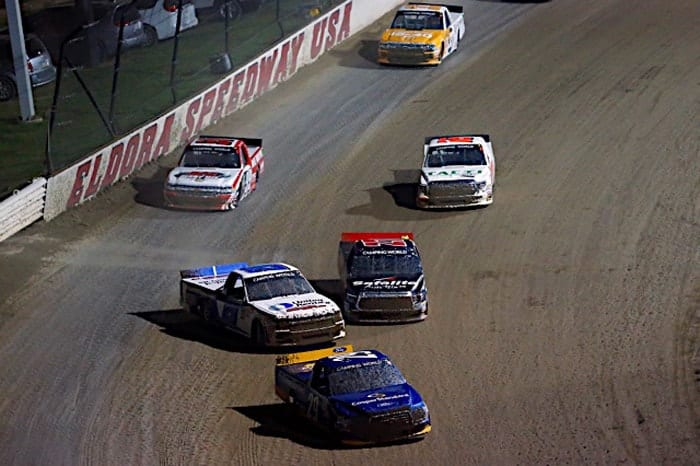 Qualifying for this race determined the field for heat races, with the top five in each heat advancing to the main race. There were 39 trucks entered, including Monster Energy NASCAR Cup Series driver Ryan Newman and Ty Dillon, and 32 made the main event.

The drivers that advanced through the last-chance qualifier were John Hunter Nemechek in a truck coated in duct tape and Noah Gragson. Tanner Thorson, Johnny Sauter, Justin Fontaine, Wendell Chavous and Dalton Sargeant filled out the rest of the main event field through owner points.

Once the main event began, three cautions slowed down the opening stage as Rhodes took Stage 1, leading all but one of the 40 laps. Also scoring bonus points were dirt racers Logan Seavey and Tyler Dippel in their CWTS debuts, Newman, reigning USAC National Sprint Car champion Chris Windom and underdog Austin Wayne Self.

On lap 44 Rhodes slammed into the wall and disappeared down pit road, and Briscoe inherited the lead. Shortly afterwards Crafton collided with Tyler Dippel, collecting Newman. All three trucks would continue.

Briscoe captured the 50-lap Stage 2 by three-tenths over teammate Grant Enfinger, with others scoring stage points including Seavey, Self, Windom and Austin Hill.

Seavey began the 60-lap Stage 3 in the lead, and cruised through lapped traffic until a caution for a crash involving Dippel and Self bunched up the field with 21 laps to go. Just after going green again following that accident, Gilliland, Myatt Snider, Hill and Cody Coughlin all wrecked.

A five-lap shootout to determine the winner was put on hold by a gigantic crash in the middle of the pack, but not before Briscoe regained the lead.

Enfinger took the lead following the overtime restart, but Briscoe slipped past on the final lap to take the checkered flag by only .038 seconds. The trucks were running side-by-side for the final two laps.

Retweet to congratulate Chase Briscoe on his #EldoraDirtDerby WIN!

There were nine cautions altogether and seven lead changes among five different drivers in 153 laps.

The CWTS heads to Pocono Raceway next for the Gander Outdoors 150 on Saturday, July 28 at 1 p.m. ET, with TV coverage on FS1.