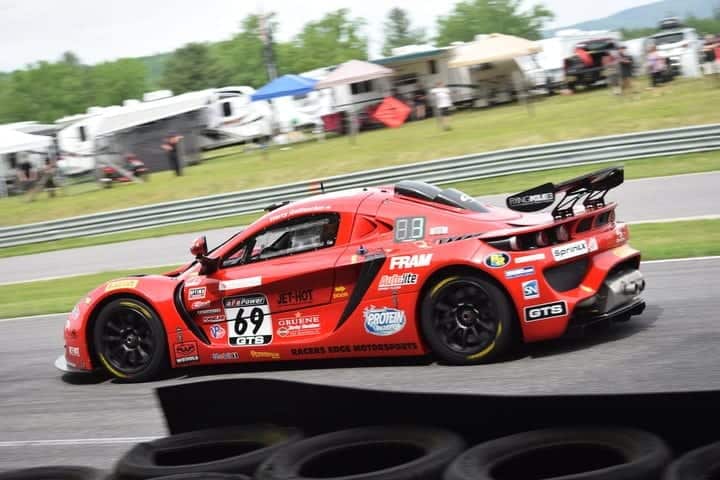 Recent qualifying sessions for Pirelli World Challenge’s GTS SprintX class have been very tight and Saturday’s (July 14) qualifying session was no exception.  Racers Edge Motorsports’ Harry Gottsacker won the pole for GTS SprintX Race No. 1 at Portland International Raceway with a lap of 91.944 mph around the 1.97-mile circuit.

Racers Edge Motorsports managed a sweep of the overall front row.  Mark Pavan in the No. 54 SIN R1 GT4 turned in a lap at an average speed of 91.726 mph to win the Am pole and the second starting spot on the grid, but just barely.

Pavan’s lap was only five-thousandths of a second faster than Classic BMW’s Brett Strom, making his season debut in the No. 113 BMW M4 GT4.  Toby Grahovec in the full-time No. 92 BMW for Classic BMW will start third in class, eighth overall.  He’s followed by Flying Lizard Motorsports’ Mike Hedlund and Ian Lacy Racing’s Drew Staveley.

Staveley is currently tied for the Am-class points lead with ST Racing’s Aurora Straus.  While Staveley is fifth in class and 10th overall, Straus qualified 13th in class (21st overall).

The frontrunners in both classes are tightly packed together.  Less than six-tenths of a second separate the top 10 qualifiers overall, which are the top five in both Pro-Am and Am.

There is one absence to note.  Adam Merzon was forced to pull out of the weekend due to a personal issue.  As a result, the Case-It Racing by Flying Lizard No. 23 Audi R8 LMS GT4 that Merzon normally shares with Ryan Eversley has been withdrawn.  In addition, Michael Cooper, who is sharing the No. 11 Chevrolet Camaro GT4.R with Tony Gaples that qualified 17th this weekend, has replaced Merzon in the TCR-class No. 44 Honda Civic Type-R TCR.  Also of note, the No. 74 Chevrolet Camaro GT4.R of Gar Robinson and Shane Lewis did not set a time in the session and will start from the rear of the field.

GTS SprintX Race No. 1 from Portland is scheduled to go green at 7:40 p.m. ET.  The race will be streamed live at World-Challenge.com.