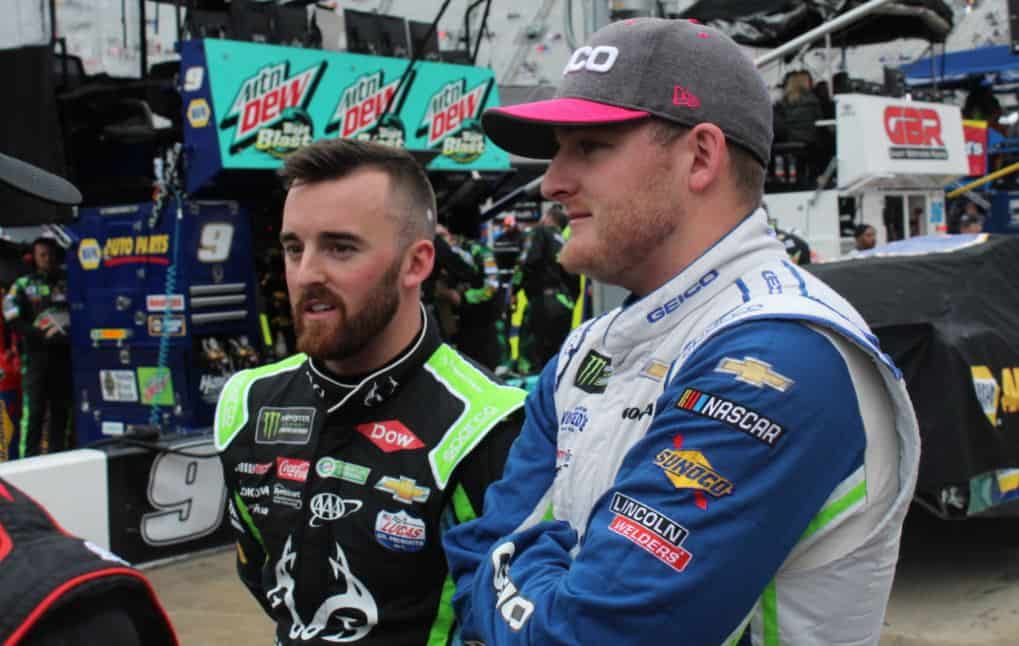 Yeah, the names at the top of the leaderboard were the same as always, but that was still a race worth watching. For the second time this season, a race threatened by incoming rain was able to make the full distance, and that uncertainty amped up the tension.

Like a sitcom, this episode of the 2018 Monster Energy NASCAR Cup Series at Chicagoland Speedway featured a variety of twists and turns throwing complications for most of the show, but by the end the status quo resumed – Kyle Busch won for the fifth time this season, Kyle Larson was again second, Kevin Harvick third, Martin Truex Jr. was fourth and Clint Bowyer rounded out the top five.

While the Overton’s 400 will probably be remembered for Busch and Larson’s final-lap duel, it nearly didn’t happen. With eight laps to go, and Larson’s Chevy Camaro pulling ever closer to Busch’s Toyota Camry, the No. 42 smacked the outside wall, but the No. 18 got caught up in lapped traffic, giving Larson a second chance.

One of  Stewart-Haas Racing’s Ford Fusions dominated early, but who could have predicted that would be Aric Almirola? The driver of the No. 10 led a race-high 70 laps and won the first stage, then suffered a loose wheel, rallied to get near the front again, and then had another loose wheel.

Bowyer got two laps down early because of repeated speeding penalties, but worked his way back up into a solid result, unlike his teammate Kurt Busch, who faded into 17th after losing Stage 2 on a Turn 4 pass from Harvick.

Chase Elliott was the lead Hendrick Motorsports car for most of the event, qualifying third and scoring points in both stages, getting as high as fifth before fading late and recording a 19th-place finish.

10 different drivers exchanged the lead 24 times, and there were five total cautions.

If a crash hasn’t taken him out this season, as it did at Daytona, Auto Club and Charlotte, Harvick has finished no worse than seventh (at Bristol). All four SHR drivers led laps and scored stage points, and Almirola will almost certainly set a career-best mark for most laps led in a season (currently 78 in 2012). SHR has captured 12 of this season’s 35 stages, and Harvick leads all drivers with 9 stage victories, in addition to winning five races.

It was another rough day for the Dillon brothers. Ty finished three laps down in 28th, slightly behind his 25.4 season average. Austin was 37th in the 39-car field, completing 189 laps after his brakes caught on fire. Austin has the Daytona 500 win, so he’s guaranteed a spot in the playoffs, but if you take that out, his average finish this year is 20.7.

This was Jones‘ second straight top 10 finish and the seventh top-10 result this season. The Joe Gibbs Racing driver has an average finish of 16th so far in his sophomore season and is holding on to the 15th spot in the playoffs, 18 points ahead of Alex Bowman and 41 ahead of 17th-place Ricky Stenhouse Jr.

Roush Fenway Racing’s Bayne was 26th, slightly behind his average finish of 25th in 13 races this season. Matt Kenseth is also averaging around a 25th-place result so far through four races in the No. 6, so their woes don’t seem to be entirely driver-based. The No. 6 team is still 29th in the owner standings out of 36 chartered cars. Adding insult to injury, Bayne’s air conditioner wasn’t working on Sunday, so that made for an even more uncomfortable race.

Keselowski has finished in the top 10 in five of the last seven races, and 10 times this season. The 2012 champ is sitting fifth in the standings and holds the seventh seed in the playoffs, highest amongst winless drivers. His Team Penske teammate Logano has completed all but two laps this season on his way to a win and 13 top-10 finishes.

This was the second time in three weeks that David Ragan matched his car number. The Front Row Motorsports driver uses No. 38, so that’s a pretty bad thing. It was the veteran’s fourth finish in the thirties this season, which is disappointing for a team capable of running in or near the top 20 if things don’t go south.

WIX Filters returned to SHR this week, so Clint Bowyer’s No. 14 was adorned in their black and yellow-gold. They had previously sponsored Ryan Newman in the No. 39 in 2013. Ironically, they were with Furniture Row Racing and Martin Truex Jr’s No. 78 last season. Bowyer and Truex, of course, were teammates for two years at Michael Waltrip Racing until the Spingate controversy.

Buckle up; the MENCS goes back to Daytona International Speedway this weekend. Like all restrictor-plate races at superspeedways, there will be carnage. I’ll guess half the field is running at race’s end, and three large wrecks, one occurring near the race’s end. We might see overtime. Also, a Hendrick driver’s night will end early because of a crash.

While anyone could win, I’m thinking a Ford will again be parked in Victory Lane, and there’s a very good chance that Almirola or Ryan Blaney could get their first wins of 2018. Almirola won this race in 2014 and nearly took the Daytona 500 in February, and in that race, Blaney led 118 laps, by far the most of any driver.