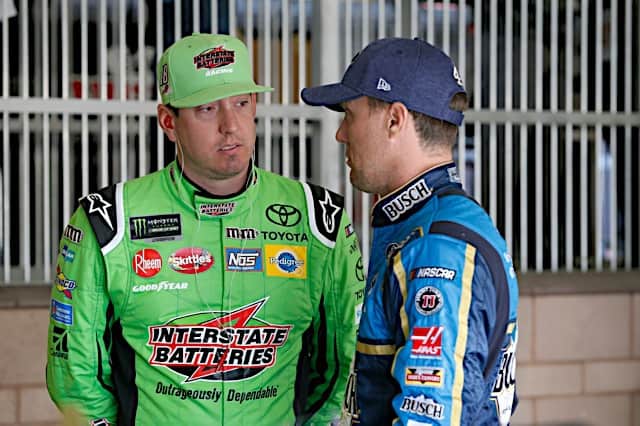 Did You Notice? … Practice doesn’t always make perfect? So often, we analyze NASCAR practice results over the weekend to find clues as to who will do well on Sunday. But do the one-lap fast practice speeds matter over a 400 or 500-mile race the next day?

I took the 15 races this season, looked at who turned the fastest lap in final practice and then where they finished. The results weren’t exactly, um, predictable….

So while winning final practice is nice, only twice this season has the Happy Hour champion gone on to capture the race itself. And in both of those cases, it’s been dominant Happy Harvick leading the way.

Overall, these drivers captured eight top-five finishes, but their performance combined still wouldn’t be good enough to lead the point standings. Their average finish of 10.3 is respectable but not championship caliber.

That gives some legs to an argument the sport is still (somewhat) unpredictable. After all, if the guy fastest in Happy Hour won every week, why run the race on Sunday?

But that’s not the only indicator we can use from practice. After all, a driver can run one hot lap and have a miserable long-run setup in what’s been a season filled with chunks of green-flag racing. Look what happens when we switch from fastest lap to best 10-lap average in Happy Hour.

Just like before, only twice did the driver with the fastest 10-lap average wind up winning the race. But there’s also a higher degree of consistency here. These drivers combined for 12 top-10 finishes, a total that would be tied for the series lead. Their average finish is also an impressive 8.8. Only Busch (7.3) and Logano (8.1) are better in that category this year.

So crew chiefs (and daily fantasy players) are right to start focusing on speed over a longer period of time instead of who just ran one fast lap. Expect that trend towards long-run cars to continue, then, with fewer restarts and short green-flag stints at the end of races. And did you notice who’s got the most 10-lap average “wins” in final practice? Harvick’s an impressive six-for-15 to also back up what’s been his best season behind the wheel of the No. 4 Ford.

It’s common knowledge that drivers don’t show what their car is capable of in practice. A better comparison would be their practice speed versus where they qualified and how much faster they are.