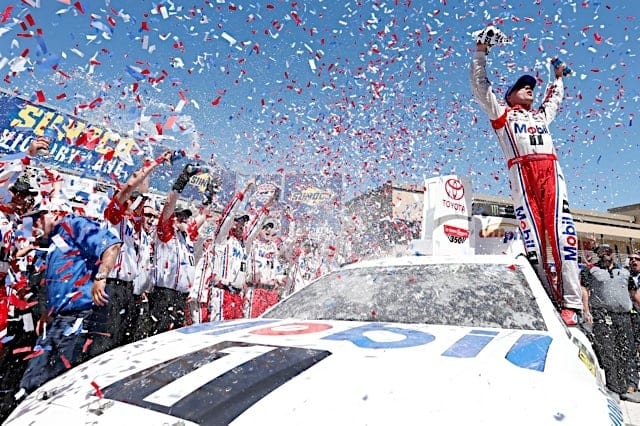 FanDuel debuted its new daily fantasy NASCAR contest at Talladega Superspeedway in April and it will continue on throughout the 2018 season. Go to fanduel.com/frontstretch to sign up FREE and you’ll get a FREE contest every night until you win $$$! You literally can’t lose your first time out.

Also, with only 0.1 points awarded for each lap led by a driver, the need for a dominator is less important when building a winning lineup. Sunday’s 110-lap race will only have a total of 11 points up for grabs in this category. Take note when building your roster and focus on mid-pack drivers who can climb up toward the front on race day.

Here are a few drivers to keep an eye on for the Toyota/Save Mart 350.

Harvick is the defending race winner at Sonoma. In 2017, he started 12th, worked his way to the front and led 24 laps en route to victory. In the last three Sonoma races, he has finishes of fourth, sixth and first.

Harvick is among the favorites to take the series championship crown and he should be at or near the top of your list to win this race on Sunday. There’s nothing here to indicate the No. 4 team is going to slow down their winning pace.

The MENCS points leader is looking for his third career Sonoma win this weekend. His first came way back in 2008, in his first season at Joe Gibbs Racing. Busch then won for the second time in 2015 and has led laps in his last three Sonoma starts.

Busch also has two top fives in the last three races held at the track. He owns the second best driver average on road courses over the past two seasons (6.3) and should be a formidable foe for Harvick Sunday.

It will be hard to overlook Bowyer this week. The Stewart-Haas Racing driver is coming off a win at Michigan International Speedway, his second of 2018. Bowyer also has the best average finish at Sonoma among all active drivers. His only win came in 2012, but since then, he has racked up three top-five finishes. That included a second place in his SHR debut a season ago, a near miss that proved the difference in him missing the playoffs.

Bowyer is becoming a championship contender and could propel himself into the upper echelon along with Harvick, Busch and Martin Truex Jr. should he come up with another Sonoma win Sunday.

Johnson ranks second among active drivers in Sonoma average finish. He has one win here, nine career top-10 finishes and has finished 13th in each of the last two races. Before that, he had a seven-year streak of ninth or better runs at this racetrack.

Chevrolet’s struggles this season seems to go out the window at tracks where aerodynamics don’t matter quite as much. Sonoma would be one of those places, throwing the edge back to those with superior driving skill. And when it comes to pure driver ability, Johnson is one of the best of all time.

McMurray has shown flashes of brilliance at times this season but has been streaky. He is currently on the upswing, though with two top-10 finishes in the last three races. Heading into a track where he has been good throughout his career, this veteran is set up for another quality finish.

McMurray has an average finish of 10.5 over the last four Sonoma races, five positions better than his career average at the track. He started on the front row in 2017, then held on for a respectable 10th-place finish. Another top-10 result on Sunday could be in the works for the No. 1.

Allmendinger is known as the resident road course ringer in the Cup Series. While that may be true because of his success in open-wheel racing, as well as his performance at other NASCAR tracks, Allmendinger has been disappointing at Sonoma in recent history. He has an average finish of 22.4 here, as opposed to a 9.3 average finish at Watkins Glen.

Prior to 2014, the ‘Dinger was a perennial top-10 driver at Sonoma. But in his four races at Sonoma for JTG-Daugherty Racing, he has finishes of 37th, 37th, 14th and 35th. He only finished on the lead lap once in that span.

On the bright side, Allmendinger started on the front row in three of those four starts, including a pole in 2015. He has also led laps in each of the last four races, showcasing those quality road course skills.

Know he’ll be the most sought after driver outside the top tier this week. The Californian has the skill to have a great race, but tread lightly.

Menard has been fairly successful at Sonoma throughout his 10 starts. He has five top-16 finishes, all in the last five races. He finished fifth in 2014 along with an 11th-place run last season.

Menard is on pace to have one of his best seasons since his arrival to the Cup Series in 2007. He is in much better equipment this time around, paired with the Wood Brothers and could be a darkhorse top-10 driver this week.

Kahne has been phenomenal at Sonoma over his career. He has one win and six top 10s in 14 starts, including four top-10 finishes in the last five races here. Until last season’s crash on the final lap, Kahne had never recorded a Sonoma DNF.

Kahne has struggled this season with the switch to Leavine Family Racing, but this week will be a little different. The team announced during the MENCS off week that it will be making a move at crew chief. With interim head wrench Jon Leonard on the pit box, and good track history, Kahne is in a good spot to bounce back. 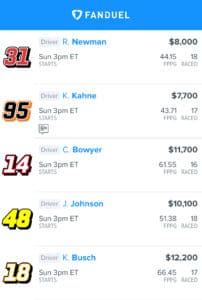