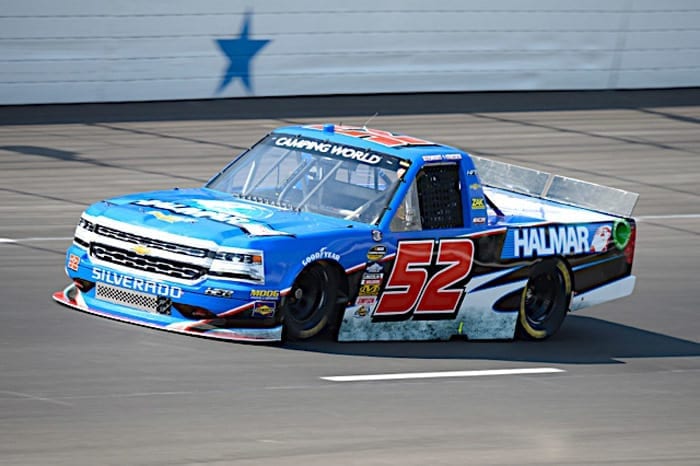 The NASCAR Camping World Truck Series returns as the series moves to Texas for the PPG 400 on Friday night (June 8).

At press time, 33 trucks are entered, meaning one truck will be eliminated from the event during qualifying, barring any entry list changes.

Of note: currently, Tyler Young will make is 2018 NCWTS debut in the No. 20 Young’s Building Systems Chevrolet owned by his family. However, Young has been on the early entry list previously, only to be replaced by, generally, a sponsored driver before the green flag, so Young may not actually end up in the seat.

Meanwhile, Spencer Davis will make his fourth start of the season for Kyle Busch Motorsports, driving the No. 51 truck. Davis has two 13th-place finishes thus far, along with a season-high seventh-place finish at the season opener at Daytona International Speedway.

DGR-Crosley Racing will bring out two trucks for the second time this year, fielding the Nos. 17 and 54 for Bo LeMastus and Chris Eggleston.

The entry list is mostly full of either Truck Series full-timers or part-time drivers not featured in upper series, as the Monster Energy NASCAR Cup and XFINITY series are at Michigan International Speedway this weekend.

The series hits the track beginning Thursday (June 7) with a pair of practices beginning at 4 p.m. ET. That follows with qualifying on Friday at 5:45 p.m. ET and the race at 9 p.m. on FOX Sports 1. Christopher Bell is the defending winner of the event but is not entered due to moving up to the XFINITY Series.