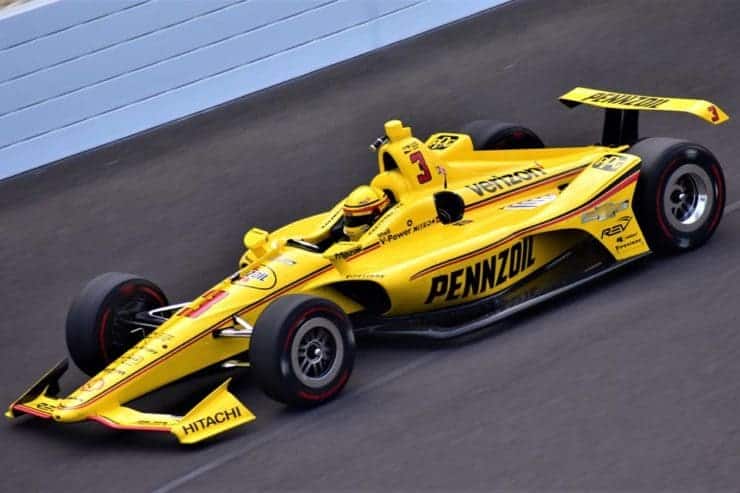 Helio Castroneves put his No. 3 Pennzoil Chevrolet on the top of the speed charts Saturday during the first qualifying session for next Sunday’s Indianapolis 500. Castroneves’ 228.919 mph lap put the Team Penske driver ahead of owner-driver Ed Carpenter who put his No. 20 Fuzzy’s Vodka Chevrolet in second.

Team Penske drivers Simon Pagenaud and Will Power qualified third and fourth while Sebastien Bourdais rounded out the top five.

Spencer Pigot ended up sixth fastest while Josef Newgarden, Scott Dixon, and Danica Patrick rounded out fast nine. Those nine drivers will fight for the pole tomorrow, Sunday, while the rest of the field will play wait and see.

While 33 drivers breathed a sigh of relief, two drivers were bumped out of the field. Pippa Mann and James Hinchcliffe failed to qualify for the event. It’s the first DNQ of her career and first Indianapolis 500 she’s missed since 2012. Mann made her Verizon IndyCar debut in the 2011 edition. She earned her best Indy 500 result last season when she finished 17th. She was looking to make her first start of the 2018 season and 17th of her career.

“When we got back in line for the last run, we took every single trim we could possibly could to the race car, we did everything,” said Mann. “Obviously it wasn’t enough. It’s the worst feeling in the world.”

The second driver to fail to qualify for the Indianapolis 500 is full-time Verizon IndyCar Series driver James Hinchcliffe. The time just simply ran out for the No. 5 team to race their way into the field as his car picked up a vibration during the final run.  He aborted his run but never made it back out on track to give it another attempt. Hinchcliffe has seen the highs and lows of the Indianapolis Motor Speedway winning the pole for the event in 2016 and then this year failing to qualify.

“Nobody failed us, the system didn’t fail us. We failed us,” Hinchcliffe said. “At the end of the day, everybody got a run, which is the rule. Our run wasn’t good enough, so blame the weather, blame other cars in line, you can blame whatever you want, but it just didn’t happen today. You’ve got to take your lumps here sometimes.”

Though his car DNQ’ed, Hinchcliffe could possibly return behind the wheel of a qualified car next weekend in order to continue his quest toward winning the championship. Schmidt Peterson Motorsports have three other cars entered with one-time drivers Jack Harvey and Jay Howard along and another with full-time driver Robert Wickens. Only time will tell whether or not Hinchcliffe will be able to race in next Sunday’s event or not.

Positions 10 through 33 will be set in single-car four-lap runs starting at 2:45 p.m. ET on Sunday. That will then be followed by the fast nine shootout at 5 p.m. to set the first three rows and pole position. The action begins on WatchESPN from 2:30-4 p.m. Sunday, with ABC picking up the action at 4 p.m.