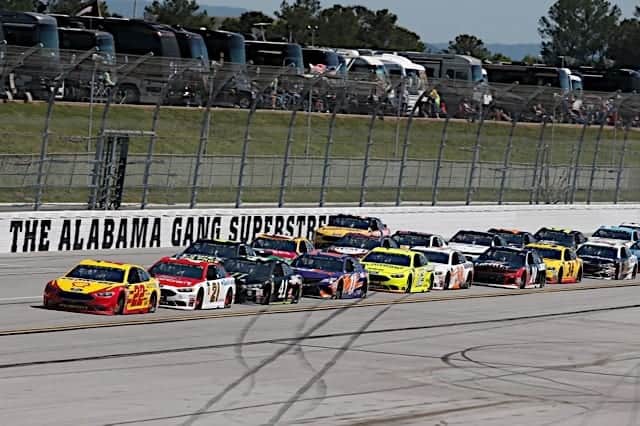 While David Ragan was putting on a restrictor-plate driving clinic, he’s strong enough that it’s almost expected that he’ll run well. He finished sixth for a Front Row Motorsports team which rarely cracks the top 20.

Less expected was the strong run of another driver, who, while his car certainly has a reputation at Talladega, hasn’t had much experience in top equipment. But there was Alex Bowman, leading 26 laps, second-most of the day to race winner Joey Logano. The crowd on hand was behind Bowman and his No. 88 ride, and he backed up his 11th-place start with an eighth-place finish, his third top 10 so far in 2018.

Calling a restrictor-plate race a crapshoot is, in one sense, accurate. After all, it doesn’t matter how good a plate driver one is if they get taken out by someone else, and that happens all too often. Drivers who might’ve made a charge and made for a great finish get wiped out before they have a chance to try.

But plate racing is a skill, and while some of the best plate racers in recent years have left the sport, there are still plenty of drivers who are fun to watch at superspeedways because they know how to work the field and make it look easy.  These drivers, if they can survive the typical plate-track carnage, are the ones less experienced drivers want to follow, because they’ll pull them to the front.  Ragan is a good example; he has an improbable win for Front Row Motorsports and grabbed another great finish Sunday.

Also, Talladega is crazy hard on drivers. One helmet cam showed how much the cars shake and bounce at speed, and it didn’t look like a whole lot of fun for the driver. It may look like they’re just riding, but I’d bet they’re all sore on Monday from the beating they take.

Where… did Joey Logano come from?

It’s been 36 long races since Logano last visited Victory Lane, stretching all the way back to last spring at Richmond, and that win was tainted by a violation.  NASCAR took away the automatic playoff bid that should have come with it, the closest the sanctioning body will come to stripping the win completely. Logano started ninth, best of the three Team Penske cars, all of which were strong Sunday, though he was the only one who made it through unscathed for his fourth career restrictor-plate win and his third in the last six races at Talladega.  Last year’s penalty seemed to take the wind out of Logano’s sails. Will this win put it back in and propel him on a winning streak?

Restrictor-plate racing has long been known for its multi-car pileups. They’re almost inevitable, and many fans find them exciting, if not completely nerve-wracking. But in recent races, the Big Ones haven’t always been kicked off by one driver getting into another. Instead, what’s triggered many big crashes has been simple aerodynamics. A car gets loose trying to pass another and around it goes.

To be fair, it’s not entirely a superspeedway problem as cars get aero loose at intermediate tracks as well. But it’s certainly more magnified because at a plate track, it’s a lot more likely to take our cars numbering in the double digits, and it’s really not a lot of fun to watch a race determined by air. Yet that’s what happened in a late-race pileup that involved more than a dozen cars, set off when William Byron’s nose and Jimmie Johnson’s left rear quarter panel got a little too close. The cars never touched, but the result was the same as if they had.

Maybe none of them would have challenged Logano, but it’s hard to say for sure. It’s definitely something NASCAR should be working on with the plate package because drivers should be able to make clean passes without wiping out half of the field. It’s one thing if a driver slips up and spins someone, but it’s another when nobody makes a mistake.

Stenhouse was in the thick of things all afternoon, showing that his two wins last year were the real deal.  He looked to be in good position to make a charge in the closing laps, but as we’ve seen at Daytona and Talladega lately, the leader is no longer the sitting duck. Logano had the preferred bottom line, and nobody could mount a strong enough charge on the outside… and really, nobody tried.  Until the final lap, drivers were unwilling to make a move to pass Logano, and by then it was too late to get organized. Just about everyone tried to pull out of line at once.  Fortunately, they didn’t trigger a pileup, but there was no chance for anyone to make a pass, and Logano rolled to the win.

Had Stenhouse had help to make a move, he looked strong enough to charge to the front, so it’s a bit surprising that someone, or a few someones, didn’t back him up on a late move.

How… come NASCAR changed the restrictor plate at the 11th hour?

While it might seem that reducing the size of the restrictor plate at the last minute would throw a wrench in the works, it really doesn’t change much.  We’re talking a difference of roughly 12-15 horsepower, good for a few miles an hour.  Cars were turning laps of over 200 on Friday in practice, about 203 mph or so, and that’s flirting with problems. The faster the cars go, the less stability they have, and it’s already plenty easy for cars to get turned and get airborne.

That happened to Jamie McMurray on Friday and resulted in a scary-looking crash.  McMurray explained afterward why those kinds of crashes are so scary, and his barrel-rolling car doesn’t look like a very fun ride.

McMurray was OK, but there is always a bit of an air of “this time” when a driver walks away, especially at a plate track.  Obviously, the changes made didn’t affect the racing, or the Big One, much, but there’s long been a line in the sand at lap speeds of over 200, and NASCAR stood firm.

the moment of truth came when drivers tried to pass and they got sucked back, so no one bothered to even try those last handfull of laps. i guess it’s good that there wasn’t the standard 5 lap to go wreck.

these cars are nothing but iroc cars.

when is chevy going to get some help? i can’t believe gm is happy with their return on investment.

Chevy’s help will come soon enough. Any time Ford starts winning races on a regular basis, Chevy whines, and Nascar helps them out. It’s been that way for decades. Keep in mind, though, that SHR went from Chevy to Ford last year, and they’ve remained competitive, so that impacts the Chevy-Ford numbers, especially this season with Harvick winning multiple races. Also, there’s a learning curve for Bowman and Byron, two of the premier Chevy teams. As they gain more experience, and as Johnson’s team continues to improve, and Nascar’s inevitable helping hand is extended to the Chevy teams, Chevy will be competitive soon enough.

Carl D – i thought bowman did a good job yesterday. i wondered how the previous driver of the 88 would had finished. LOL!

As for Chevy getting some help do we want to start back down the road to weekly adjustments to “equalize” competition?. I thought that was what was going on now, that each manufacturer had to meet the same aero numbers, but how was up to them. Given Fords recent announcement about eliminating most of the car line GM can’t be far behind.
Many, well at least some, of us complain that nascar needs to get closer to the street car bodies. I for one dont think that is realistic, but do favor composite bodywork that cant be altered by the teams.

Bowman lead because of early pit stops for some fast cars (probably to get out of the pack) and the drivers were told in the driver’s meeting that no one passes the 88 when he gets the lead.

Amy continues to watch races through those rose-colored glasses of hers. The only takeaway from this fiasco of a race was that a group of drivers decided staying in the draft was more important than attempting to win.

“Plate racing is a skill.” Seriously? It is impossible to pass without drafting help from another driver, so all the skill in the world was not going to get anyone past Joey Logano without somebody at least willing to take a risk. Amy acts as if Ricky Stenhouse was handicapped by no help in the final laps, but she ignores the fact that Chase Elliott moved out to pass, but was left hung out to dry by Stenhouse. Kurt Busch did the same, but was hung out by Kevin Harvick. The only good thing to come of those incidents was that Busch and Elliott finished ahead of Stenhouse and Harvick even though they had zero chance of passing Logano.

Plate racing has never been legitimate, but now it is also a colossal bore! Congrats to NASCAR and Amy Henderson on seeing things that simply aren’t there.

A crushingly boring race. That question was answered before Stage 1 was over. I was hopeful it would get better. It did not. So I watched a DVR of the NBA playoffs and checked to see who won Dega in the paper this morning.

It seemed to me that none of the Fords would get out of line in the closing stages. Only the Chevy driver, Chase, even bothered to challenge and he was (briefly) hung out to dry.

I would enjoy these races a lot more if they just reduced the engine size across the board. I can’t tell if a car is going 200 mph or 150 mph. Reduce the Cubic inches and the aero that sucks the cars to the ground, and driver skill would be much more important…and maybe lead to more passing.