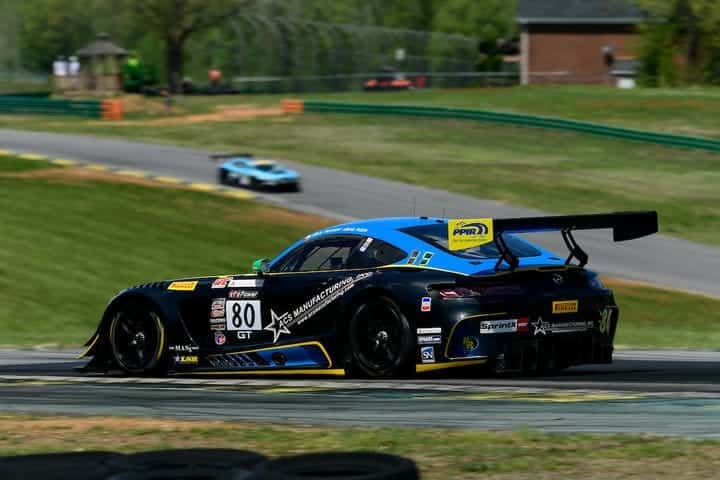 Lone Star Racing’s Mike Skeen was able to take the overall lead away from K-PAX Racing’s Rodrigo Baptista with less than two laps to go on Sunday (April 29).  From there, Skeen was able to pull away to give himself and teammate Scott Heckert a well-deserved victory.

“For me, it was just trying to hunt down the Bentley that was way out front,” Skeen said after the race.  “We kept eating away at the gap and we got a little bit of help from traffic, which really closed it up.  I was right on [Baptista’s] bumper for a couple of laps.  [The Bentley] has more straight-line speed, so we knew it was going to be tough to pass.  I had to find a unique area to make it work, so I followed [Baptista] and watched [him] for a couple of laps.  I  noticed that out of turn 3 might be a good place where I was getting pretty good runs, and there’s a good brake zone going into turn 4.  So, once the time came down to the end, it was do-or-die in order to make it work.  Later in the lap, [Baptista] went a little off track on his own so that took the pressure off.”

K-PAX Racing’s Maxime Soulet started from the pole, but didn’t even get through turn 1 before CRP Racing’s Fabien Schiller got past for the lead.  Schiller opened up a slight gap on Soulet.  However, as the run continued, the front splitter came loose on Schiller’s Mercedes.  The loose splitter created a substantial vibration that brought Schiller back to Soulet prior to the mandatory pit stop.

It was the stop that decided the race.  K-PAX Racing got Baptista into the No. 3 Bentley and back out on track close to the 75-second minimum pit time.  Meanwhile, issues on the No. 2 Mercedes meant that CRP Racing’s DeVilBiss-sponsored car for Daniel Morad re-entered the fray after over 80 seconds in the pit lane.  That was more than enough for Baptista to jump Morad and take the overall lead.

Meanwhile, Skeen was a man on the move.  After the stops, he was running fifth and methodically drove past Morad, Pfaff Motorsports’ Scott Hargrove and Alegra Motorsports’ Michael Christensen to move up to second.

From there, Skeen started putting down the fastest race laps of the weekend to run down Baptista.  Traffic allowed Skeen to get right up to Baptista’s rear bumper and size up the rookie contender.  Lap 33 was the time to pounce and Skeen made it work.  Any chance for Baptista to come back on Skeen ended when he slid off-course at the Oak Tree turn and nosed into the tires.

Thanks to Baptista’s appointment with the tire barrier, the Lone Star Racing Mercedes won by 19.029 seconds over Hargrove and Wolf Henzler.  Christensen and Spencer Pumpelly were third, followed by Morad and Schiller.  GMG Racing’s Michael Lewis and Alec Udell finished fifth in Pro-Pro, sixth overall.

Baptista was still able to hold on for the weekend Pro-Am sweep.   Despite that, almost no one at K-PAX Racing was all that pleased with the run since overall victory was within grasp.

Baptista and Soulet ended up fifth overall, 21.528 seconds out of the overall lead.  That was still good enough to win Pro-Am by 24.192 seconds over Dream Racing Motorsports’ Alessandro Bressan and Yuki Harata.  TR3 Racing’s Wei Lu and Jeff Segal were third.  Caesar Bacarella and Martin Fuentes ran as high as third overall early on, but backed it down and still easily won the Am-class.

Pirelli World Challenge teams will take a couple of weeks off before traveling to Canadian Tire Motorsports Park.  It will be the third SprintX weekend of the season, so all of the various classes will be in action on the 2.459-mile road course from May 18-20.