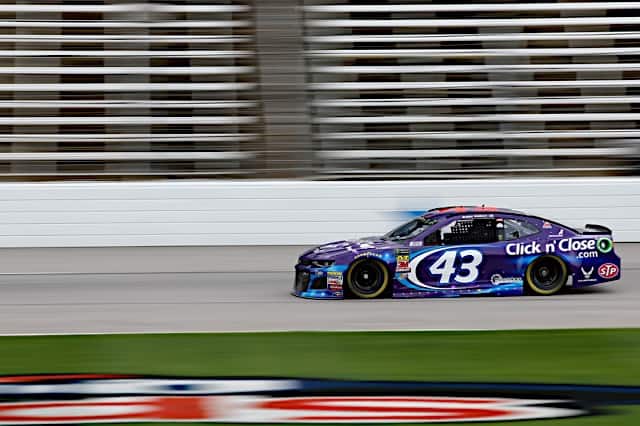 Man, what a week our underdogs are in for after a weekend like that, right?

Even more than Daytona, Sunday at Texas Motor Speedway proved to be the ultimate opportunity for the underdog teams in the Monster Energy NASCAR Cup Series. For when tires started popping, cars started sliding and pit road became as troublesome as the Turn 3 wall, the smaller teams were able to avoid it all and rise to the top half of the field at the end.

We shouldn’t have been too surprised by Texas’ punishing form of competition. The 2017 repave widened the track’s corners, subsequently flattening them in the process. But the new layout hasn’t affected cautions as much as it did the racing. The multi-groove competition was replaced with the single-groove all-out-brawl to get to the bottom. This leads to desperation, which leads to aggression, which leads to, yes, accidents.

The aggression part was shown in the form of side-drafting, which is what caused a couple accidents, including the seven-car wreck to start the final stage in Turn 3. Harrison Rhodes and David Ragan were two damaged in that accident.

However, it was the air that also proved to be the factor in making passes. It seemed all you had to do was to get close enough and the front car would move up the rack slightly and you’re all set for the straightaway.

So, the fans about got the best of everything. Plenty of passing, racing, drivers up front, accident, pit road drama and stories to follow this week leading to Bristol — where I’m sure none of this will bleed over. No, no.

The underdogs sure hope it all does, as this weekend was refreshing, healthy and had a nice pat on the back following weeks of tough runs and lackluster speed.

To start from the top would put us in the top 10, as Darrell Wallace Jr. earned his second top 10 of the year in eighth spot. He also earned the Frontstretch “Underdog of the Race” for the third time this year, more than any other driver.

And it wasn’t a fluke finish, as Wallace started 15th, raced just outside the top 10 — spending more than half the race in the top 15 — and got himself on the lead lap following a hearty battle with Kevin Harvick for the spot mid-race.

Getting on the lead lap is what made the final 23-lap shootout easy for Wallace, as only 10 cars joined him on the lead lap, nearly confirming a top-10 finish for the No. 43 Richard Petty Motorsports camp even before the checkered flag.

Next in line was Ty Dillon in 13th. Now, this was an especially good day for Dillon and Germain Racing, who were “hot off” their best finish of 22nd at Martinsville. This marks their best finish of the year and best since Phoenix last November. However, that first-career top 10 still eludes Dillon after his 61st Cup start.

Behind him was Michael McDowell, who silenced the 10-year-old replays of his 2008 Texas qualifying wreck by finishing 14th. The finish was his best at Texas, his first top 20 in 17 starts at the track and his best non-plate finish since last August at Watkins Glen.

One spot and one lap behind the Front Row Motorsports driver was the man who filled that No. 34 seat just two years ago, Chris Buescher. The 2016 Pocono winner scored his second 15th-place finish for JTG Daugherty Racing on a 1.5-miler this year and grabbed his best finish at his home track.

Matt DiBenedetto also crushed his career-best Texas finish in 16th. The run was among the first highlights this Go Fas Racing team has had this year and their first top 20.

Kasey Kahne picked up 11 spots from qualifying, jumping from 28th to 17th at the line. Despite the solid result, it came six laps down and was damaged when he spun with Trevor Bayne while the two were racing for the free pass on lap 251.

But enough of this “season-best result” stuff, how about a career-best result? Ross Chastain scored a top 20 on debut last spring at Dover with Premium Motorsports and hadn’t seen the place since. That ended in his seventh career Cup start Sunday when he surpassed 20th and drove clean to 18th.

In Premium’s fifth year of Cup competition, Chastain is still their only driver to finish top 20 on a non-plate track, and now he’s done it twice. Chastain plans to run all the companion races alongside the XFINITY Series in 2018 for Premium.

Cole Whitt spent time with Premium in past but switched to TriStar Motorsports in 2017. The partnership hit a high point Sunday with a 19th-place finish, his best of the year.

Gray Gaulding rounded out the top 20, scoring BK Racing’s second top-20 finish of the year and first non-plate top 20 since Bristol in August of 2016, despite finishing 12 laps down.

Landon Cassill tied StarCom Racing’s best finish in their short Cup Series history coming home 21st. The single-car Chevrolet team saw a driver change last time out at Martinsville with Cassill replacing Jeffrey Earnhardt, and the experienced Cassill was able to pay them back on Sunday. Good enough to give Cassill another drive, as tweeted post-race by the driver.

Uncle Derrike is bringing me back for another one https://t.co/B0JJLk37Fb

And finally, Harrison Rhodes completes this large happy underdog group from the 22nd spot. In just his third Cup start, Rhodes was able to stay on track despite heavy nose damage to score his best result.

This is the smallest this section may look all year. But, hey, if a race like Texas can happen once it can happen again.

David Ragan may have finished a not-so-bad 23rd on the day — and on average ran higher than in any race this year — but the late big wreck saw him collide with Denny Hamlin and Aric Almirola to damage the right front of his Front Row Ford.

The wreck hindered what could have been a stronger result in a day where everyone seemed to capitalize on the misfortunes of top teams. One of those what-could-have-been days as Ragan was running top 15 when that crash broke out.

AJ Allmendinger has twice won the Frontstretch “Underdog of the Race” this year and could have grabbed another top 15 like his teammate Buescher did Sunday. However, an engine failure saw him DNF with just 10 laps to go, settling for 24th.

Reed Sorenson suffered overheating issues in his No. 55 Premium Chevrolet, coming home 31st after 209 laps. With his teammate grabbing a top 20, Sorenson surely had his head aimed higher when attrition started to hit. Unfortunately, he was part of the attrition.

The XFINITY Series also had an interesting weekend at Texas, as qualifying was rained-shortened and the race also had eight cautions. However, it wasn’t as big a day for the underdogs as in Cup.

Spencer Gallagher led the way again, finishing 10th. The result was especially meaningful after spinning on lap 72. He now has three top 10s versus only one in all of 2017 with GMS Racing.

Ryan Truex scored another top-15 finish for Kaulig Racing in 13th while Jeremy Clements finished 16th after leading a lap. Texas was his third straight top 20 in 2018.

P16 today! We ran a good race and “blocked and tackled” as my crew chief Randy Cox says! Proud of my @GoFasRacing32 team ? pic.twitter.com/MDnQN5q6Wo

Statistically, the last 13 races have marked one of the worst stretches of Jimmie Johnson's career.

For comparison Gray Gaulding, driving for a heavily underfunded team, has the same amount of top-10 finishes in that span. pic.twitter.com/7UJAisNTTV