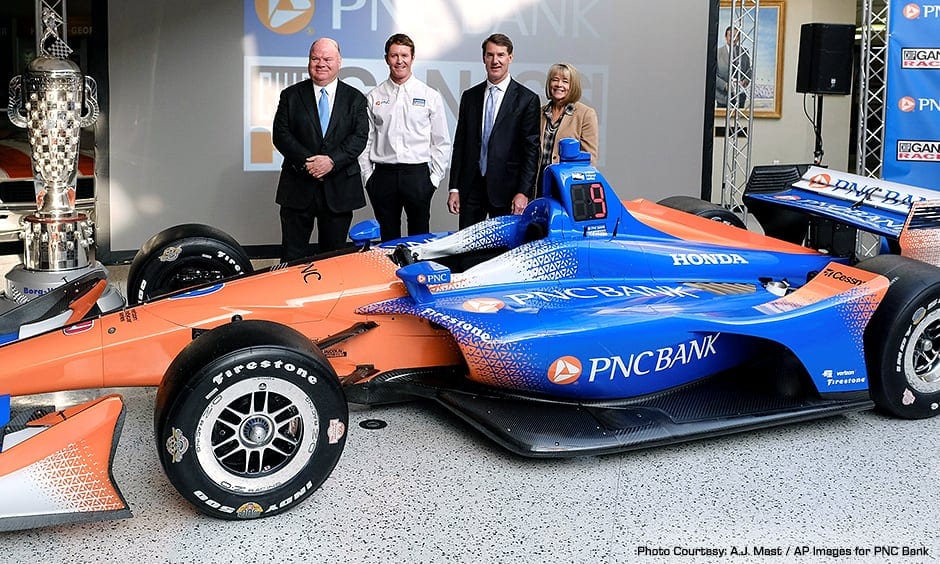 On Tuesday (Feb. 6), Chip Ganassi Racing and PNC Bank announced a partnership that will see the financial corporation on Scott Dixon’s No. 9 Honda for the 2018 IndyCar Series season.

When the 2017 season started, he had a one-race deal with GE LED Lighting at St. Petersburg. NTT Data stepped up as a primary sponsor for Dixon, along with Tony Kanaan, in 13 races. Camping World sponsored three events for the New Zealand native, including the Indianapolis 500.

With Dixon’s resumé, finding a replacement for Target, which sponsored him for 15 years, should have seemed easier. He’s a four-time champion and an Indy 500 winner; who wouldn’t want Dixon to represent their company?

That just wasn’t the case last year. It probably took a lot of convincing from Ganassi to have NTT Data sponsor two of the four cars for a majority of the season.

But that stress should be relieved now. PNC Bank, which is headquartered in the team owner’s hometown of Pittsburgh, appears to be the perfect fit.

“As a Pittsburgh native, PNC was a trusted brand I grew up with,” Ganassi said. “I opened up my first account as a teenager, and that relationship later expanded to include my business financing.

“Our racing team has enjoyed a formal relationship with PNC since 2013 where we have created opportunities to introduce our love of the sport of racing to PNC and their clients.”

Dixon’s new paint scheme is one that will be hard to miss on race day. His No. 9 Honda features a vibrant blue and orange design. With Ganassi fielding only two entries this year (Ed Jones in the No. 10), the team looks to focus on the performance of fewer cars instead of fielding four Hondas with Dixon being the only one to contend for wins on a weekly basis.

The pairing will benefit PNC, too. Dixon will likely find a way to get the sponsor in Victory Lane this year. He might even compete for a championship come September — like he has so many times before. He also has the amiable personality that makes life easier for public relations and marketing representatives.

The news conference of the Ganassi-PNC partnership can be viewed here: