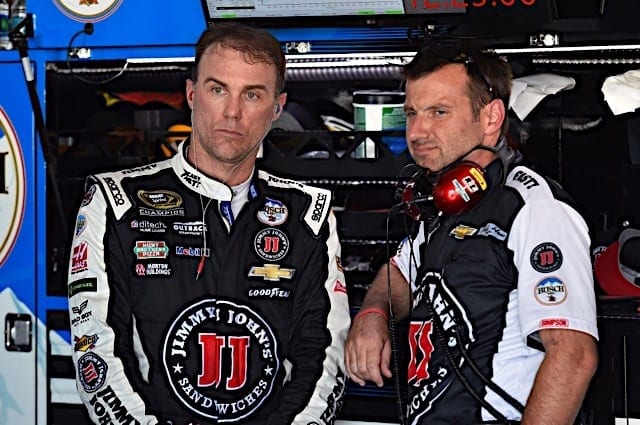 While what happened in the final laps of Sunday’s race at Texas was plenty interesting, the actual race to make the championship four got a bit less interesting heading into the next and final elimination race at Phoenix this coming Sunday. While anything can happen in racing, the chances of high drama in Arizona will be significantly less with three of the championship four already decided and the fourth driver having a decided advantage. But thanks to Kevin Harvick, there was some late race drama at Texas.

HOT
They used to call Kevin Harvick “The Closer” because of his ability to make late race passes for victories, but that nickname hadn’t been used much in recent years. Harvick showed that doesn’t mean he is still not able to make that late-race pass for the win. The one thing that surprised here is that Harvick passed Martin Truex Jr. on a 1.5-mile oval for this win. Truex has proven himself the king of the cookie cutter tracks, and that’s not a knock since there are unfortunately way too many of them on the NASCAR schedule. You’ve got race your best at wherever they tell you to go. It’s just that on this day Harvick was better at the end, closing out a victory and clinching a chance for another championship at Homestead. And now all of sudden, they guy who we all said would need to and very well could win at Phoenix, doesn’t have to.

NOT
The former king of the 1.5-milers was Jimmie Johnson, but after Sunday’s surprisingly lackluster performance at Texas, where he was three laps down at one point, Johnson is left with a win or no chance for an eighth title scenario. Johnson’s 27th place finish leaves him 51 points behind the fourth-place Brad Keselowski. Johnson and crew chief Chad Knaus have pulled plenty of magic from of their NASCAR hats during their historic career, but there’s little sign of the No. 48 duo being able to do that this time at Phoenix.

HOT
OK, so Martin Truex, Jr. didn’t finish off a potential win at Texas, but the second place finish put him in the championship four as he has a 76-point lead on fifth-place Denny Hamlin and a 57 point lead on Keselowski. So, like we’ve said most of the year, Truex will go into Homestead as the guy to beat. He still led 107 laps on Sunday. Also, Truex has been first or second in the points since the first Richmond race back in May while leading an amazing 2,175 laps this year. The No. 78 team has certainly been the best and most consistent this year and if Truex does win the title, no one can say he didn’t deserve it.

NOT
While it’s true that in the last two races that Kyle Larson, being out of the playoff picture, was probably taking a few more risks in simply going for the win, three straight DNFs just don’t look good on a racing resume. Larson had a fine season with four wins and making it to the round of 12 in the playoffs. However, the the No. 42 team now has six DNFs on the season. And while you can say these last two didn’t matter, it’s just not a good habit for a race driver and race team to get into. You can’t win if you can’t finish (a great revelation there) and if Larson and his Ganassi Racing team can’t get that figured out, they’ll always have a tough time winning a title.

HOT
OK, just admit it. When Chase Elliott was running behind Denny Hamlin at any point in Sunday’s race, you wanted to see him get his revenge for last week there, right? I mean wouldn’t it have been fitting for Elliott to essentially knock out Hamlin of the playoffs points picture, too? And really, there was nothing that Hamlin could have said about it. He would have got his . . . plain and simple. But here’s the thing, Chase Elliott isn’t like that, at least not at 200 mph. So while Elliott, in large part due to Hamlin’s wreck’em and run hit last week at Martinsville, has to win his first Cup series race at Phoenix to make the championship four, he’s too classy of a driver to pull the same kind of trick as Hamlin did. So, yeah, a bit of a bummer for us fans, but another lesson on doing the right thing from young and mature Elliott.

NOT
Ideally, this playoff points system would produce plenty of drama going into Phoenix. But Keselowksi’s ability to recover so well from early troubles and finish fifth on Sunday puts him 19 points ahead of Hamlin and 22 points ahead of Ryan Blaney in the points battle for the final spot at Phoenix. While Keselowski hasn’t clinched anything, he certainly sits in good shape. The down-side for fans, is the likelihood of late race drama to reach the championship four is significantly less now.

Predictions
Anytime the Cup series goes to Phoenix and Kevin Harvick is racing it’s pretty much impossible not to pick him. In the last five races there, he has two wins two top fives and a top 10 while leading 506 laps. So yes, Harvick has to be the pick there, even though he’s not in a must win situation. The driver who might not think about underdog pick is . . . well, why not, Dale Earnhardt, Jr., who does have a win and a top five finish at Phoenix in his last four races there.

Actually, Jimmie Johnson is the real ” Closer” in Nascar. 5 championships in a row makes Jimmie the real deal. Last year’s 7th championship when it didn’t look like he had a chance proved to everyone that Jimmie Johnson is real Closer.
Harvick isn’t close to Jimmie in any stats, none. More like the pretender.

But Harvick is way cooler than JJ.