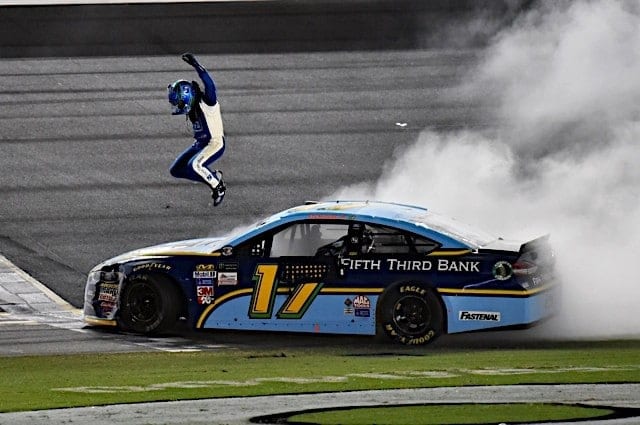 Monster Energy NASCAR Cup Series: A Night to Remember – On nearly any metric, the opening night for NASCAR on NBC in 2017 seemed to be a success.

At the top of the list was NBC, who kicked off their third straight season with the 400-miler, even bringing on Olympic medalist Ato Boldon as a new trackside reporter.

Additionally, the race also saw multiple records. With 14 cautions, the race suffered more yellow fever than any July Daytona race in history dating back to 1959. These short runs (the longest being of 22 laps) gave us plenty of action up front, with a lack of single-file racing producing 33 lead changes, the race’s most since 2011.

With an entire second half of 2017 still to come, every weekend may not be as notable and unforgettable as this one, but let us be happy that it happened. – Zach Catanzareti

Byron led 28 laps over the 22-hour race, delayed once for 16 hours for rain, and again for three hours on Saturday afternoon. The 19-year-old outlasted a rash of late-race cautions to score the victory.

Three of the top-five finishers in the 100-lap race recorded career-best finishes. Dakoda Armstrong scored his second consecutive top-five finish, finishing third at Daytona. Jeb Burton, in only his third race of the season, while David Starr scored his first-career top-five finish in 112 career races, dating back to 2000.

Brendan Gaughan and Joey Gase were the only XFINITY Series regulars to post top-10 finishes in both races at Daytona in 2017. Gase has picked up all three of his top-10 finishes of his career at plate races, spanning 157 races.  – Dustin Albino

It did actually start, but it did not make it far enough to be classified as a race before being stopped on Friday.  Footage was a bit unclear, but it appeared that Trenton Estep and Remo Ruscitti had contact and crashed in Turn 4.  From there, the crashing was on.

Four drivers (Estep, Etienne Borgeat, Jeff Mosing and Stephen Tullman) were all sent to local hospitals after the crash.  Mosing was ultimately released Friday night and considered sitting out Saturday’s Continental Tire 120 at the Glen for the IMSA Continental Tire SportsCar Challenge.  However, Mosing was cleared by IMSA to race Saturday and did so, finishing third in Street Tuner with teammate Eric Foss.

On Saturday, Mosing described his condition to Frontstretch.

“I’m sore, but nothing’s broke,” Mosing told Frontstretch during the Fan Walk prior to the Continental Tire 120 at the Glen.  “I got a clean bill of health at the hospital.  I got released [Friday] night.  We had contingency plans to put Kenton Koch in the car, a very able driver that’s possibly an upgrade.  Thankfully, when I got up, I started feeling what I thought was good enough to get in the car.  I got checked out by IMSA, and they gave me the go-ahead.

In regards to the big wreck, Mosing (who was in the yellow No. 01 in the clip) was a bit unclear as to what happened.

“With Estep and Ruscitti, I saw the smoke.  I didn’t know who was involved yet,” Mosing continued.  “[I]…chose a line to the left as I was slowing down since I knew that there was always the possibility of someone coming back in front of me.  That ended up being Ruscitti and Estep.  They were pushed back into my path and I didn’t have anywhere to go.

The wreck occurred on the second lap of the race and prompted a red flag.  As less than two laps were completed, rules necessitated a complete race restart.  However, the medical helicopter had taken off, meaning that they could not race until it returned.  As a result, IMSA officials decided to abandon the race.  It will be made up at a later date.

As of the last update, Borgeat, Estep and Tullman are still in the hospital.  The IMSA press releases have not revealed any details on specific injuries to the drivers.  However, they have stated that they are not life-threatening. – Phil Allaway