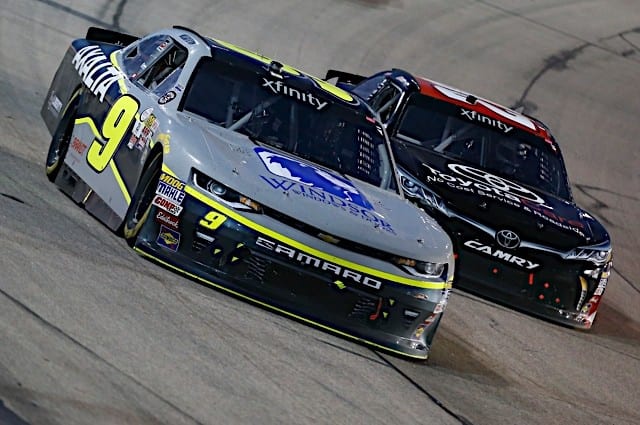 Monster Energy NASCAR Cup Series: Happy Days for Stewart-Haas Racing in Sonoma – Car owner Tony Stewart called it a “perfect race” for driver Kevin Harvick, who broke a 20-race winless drought Sunday at Sonoma Raceway. Expanding to his three other teams under the Stewart-Haas Racing umbrella, he called it “awesome.”

Starting from the top, it was indeed a big win for Harvick, who never won at Sonoma in 16 prior races, in the Toyota/Save Mart 350. Snapping a few droughts, he also wins on a road course for the first time in nearly 11 years. An official playoff spot will also keep Harvick happy for another week.

The next closest man on track was Clint Bowyer, who drove himself back to the front without a caution to finish second. The comeback performance gave SHR a 1-2 finish for only the third time in team history.

Kurt Busch was a constant threat in the top 10, eventually finishing in the seventh spot. Following a tough stretch of races in the month of March, Busch now has finished top 10 in half the races in 2017.

And finally, a 17th-place finish may not be much for an SHR driver, but Danica Patrick joined Bowyer in the comeback category on Sunday. Following not one but two accidents off the front bumper of Dale Earnhardt Jr., she drove the rest of the day with a damaged No. 10 Ford, playing a strategy game late before settling for 17th. She advances two spots in points from 30th to 28th. – Zach Catanzareti

Byron started the night in sixth position. However, with it being the series’ first stand-alone event of 2017, it allowed for opportunity for XFINITY regulars as the sport’s biggest stars were in Northern California, preparing for the first road course event of the season.

Along with Byron, each of the top-five finishers, including Ryan Sieg, Tyler Reddick, Ross Chastain and Dakoda Armstrong, either equaled or bettered their career-best results. Most of these underdogs ran outside the top 10, but a caution during a cycle of green-flag pit stops caught most of the competitive cars at least one lap down.

We did it! So proud of everyone on this team. Came close last week and got it tonight. So thankful for the opportunity

The racing at Iowa was superb all weekend long. Three, four-wide racing throughout the night has to raise the question to NASCAR on whether or not to move the Cup Series to the 1-mile oval. If not, that’s OK because it’s a perfect stand-alone event and location for the XFINITY and Camping World Truck series. – Dustin Albino

Camping World Truck Series: John Hunter Nemechek Goes Back-to-Back – Just a week after I talked about the possibility that Gateway winner John Hunter Nemechek wouldn’t make it to the playoffs due to funding issues, he went back-to-back with another victory at Iowa Speedway. Of course a trip to Victory Lane doesn’t automatically mean the remainder of the season is a guarantee, but you can bet Fire Alarm Services, which was on board the No. 8 Chevrolet at Iowa as part of a renewed agreement that included three additional races, was thrilled to see its logo front and center on the broadcast.

It wasn’t easy for Nemechek or NEMCO Motorsports though. The quick turnaround from Gateway required long hours at the shop, working until early morning to get the truck set up for Iowa. But that hard work certainly paid off.

As someone associated with the small team told me via text message on Sunday, the first win for the team was a relief after the struggles throughout the first seven races, and the second one was all about the joy of winning. You could see the change in how Nemechek reacted in Victory Lane from relief to excitement between Gateway and Iowa, and you’ve got to bet that back-to-back wins has brought hope to the team. For the sake of the series, let’s hope it also translates into sponsorship to keep Nemechek on track too. After all, NASCAR can’t afford to lose another Truck Series team. – Beth Lunkenheimer

Sports Cars: Trouble for Two Full-Time IMSA Teams – The past week has seen negative news come out about two mainstays in the IMSA paddock.  First off, Risi Competizione, the only Ferrari team in the GT Le Mans class, has withdrawn from next weekend’s Sahlen’s Six Hours at the Glen and the next couple of races.

Team owner Giuseppe Risi told SportsCar365.com that the team will be back later this year.  For now, the team is regrouping and “consolidating resources.”

Meanwhile, the News Service of Florida is reporting that Visit Florida, the state of Florida’s tourism board, gave Spirit of Daytona Racing a 30-day notice for the termination of its primary sponsorship on June 3.  As a result, Watkins Glen will be the final race that the team will run its Riley Mk. 30-Gibson under the Visit Florida Racing banner.

Reasoning for the move seems to not necessarily be performance-based.  Visit Florida has had its budget slashed substantially in the past year and has to cut spending in turn.  Regardless, 2017 has been a tough year for the Daytona Beach-based operation.  In fact, a third-place finish in the Rolex 24 has been the only highlight of the season.  A crash for Renger van der Zande forced a withdrawal from Long Beach.  A crash took them out of Detroit.  Outside of Daytona, the team’s best finish has been sixth at Sebring, the last race the team finished. – Phil Allaway

Verizon IndyCar Series: Scott Dixon Grabs First Win of 2017 – Scott Dixon claimed the 41st win of his career and the first of the season at Road America on Sunday. He led 24 of 55 laps in the Kohler Grand Prix and cushioned his title lead to 34 points over defending series champion Simon Pagenaud.

Dixon’s Chip Ganassi Racing teammate Tony Kanaan had an unpleasant meeting with the Armco barrier in Turn 11 after losing control of his No. 10 car in an attempt to pass Alexander Rossi. He rested against the wall for a few moments after climbing out of his car but appeared to be OK after the crash. He finished 21st.

IndyCar remains in the Midwest as the next stop on the schedule is Iowa Speedway for the Iowa Corn 300 in two weeks. It’s the third and penultimate oval event of the season. – John Haverlin

Formula 1: Daniel Ricciardo Capitalizes in Azerbaijan – Red Bull’s Daniel Ricciardo won his first race of the F1 season at the Azerbaijan Grand Prix. Valtteri Bottas earned the second step on the podium after going a lap down to start the race due to a puncture and wing damage. Lance Stroll followed his solid showing in Canada by taking third, the best finish of his career. Ricciardo took advantage of Lewis Hamilton and Sebastian Vettel, both making mistakes.

The race began in what may be considered a bit of a typical fashion, with slight contact between Bottas and Kimi Raikkonen, along with Carlos Sainz Jr. spinning as the field reached the first turn. From there, the race settled in to a normal pace.

And then, things fell apart. The Red Bull of Max Verstappen gave up and he found himself parked on the track. The street course doesn’t feature the same crane areas as other tracks and thus a safety car eventually managed the field.

Under caution Vettel ran into the back of Hamilton, then came alongside of Hamilton and swiped him. Hamilton may have been unnecessarily slowing the field but Vettel seemed to blow it. The stewards agreed and later gave Vettel a 10-second stop-and-go penalty, but Hamilton’s baffling coming loose equated to a similar gaffe and the two tangled to finish with Vettel fourth and Hamilton fifth.

The ensuing restart seemed to be the F1 example of the drivers going mental as they pushed the limits for overtaking and found that the narrow streets of Baku don’t provide the best environment for doing so. The Force India drivers of Sergio Perez and Esteban Ocon collected one another, and the debris snagged Raikkonnen. All three drivers began the process of retiring but were saved by the red flag for track clean up. The red flag allowed teams to make changes and put some cars back on track.

The race, in many ways, was the kind of event that was expected last year during the inaugural GP as the drivers often found the track difficult. The hostility between Lewis Hamilton and Sebastian Vettel is sure to linger and should be an intriguing story to follow. Of course, the same could be said of the Force India drivers after they also tangled in the previous race in Canada. – Huston Ladner

NHRA: The New Familiar Faces – A couple of drivers have stepped to the front of the ranks this season and continued to flex their strength at the Summit Racing Equipment NHRA Nationals this weekend. Steve Torrence won for the fourth time this season in Top Fuel, while Bo Butner, Pro Stock, and LE Tonglet, Pro Stock Motorcycle, each notched win number three on the season. It’s no coincidence, given the strong totals in the win columns, that all three also lead their respective classes in points.

Torrence faced off against Doug Kalitta in the Top Fuel final and got the win with a 3.743-second, 331.45 mph run to best Kalitta’s quicker but losing 3.736-second, 331.36 mph try on a holeshot. It was Torrence’s sixth final round appearance of the season overall.

“It’s been a great season so far and we are hoping to keep this momentum going,” Torrence said. “We just need to keep our head down and work hard so we can reach our goals as a team.”

In Funny Car, Jack Beckman faced off against Robert Hight and got the win with a 4.073-second, 311.85 mph run over a tire-smoking Hight. It took Beckman’s essentially new team time to gel, but this is his second win during the four race summer swing so it appears things are coming together.

Beckman also got by Cruz Pedregon, Matt Hagan, and Tommy Johnson, Jr. en route to his matchup with Hight.

“Today was a great day, we made four pretty consistent runs and my car was good when it needed to be,” Butner said. “It’s one thing to have a good car, but we also had a lot of things go our way to get those win lights today.”

I found both the Truck and Xfinity races much more fun to watch without the Cup teams/drivers there to take candy from the kiddies. With the playoff points and ‘win and you’re in’ system, the interlopers are really screwing the teams. Now, they not only get the trophy and the $$, but keep the regulars from earning their instant ‘in’. Shameful.

Bill B
Reply to  salb

I agree salb. I watched both the truck and xfinity races this week. I can’t remember the last time I could say that.