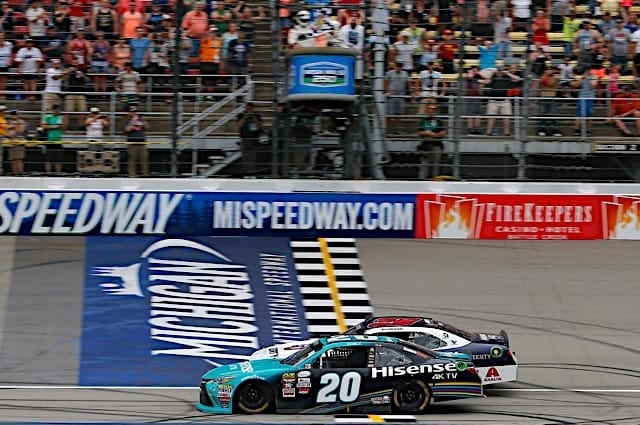 Events at Michigan International Speedway and Gateway Motorsports Park took place last weekend in NASCAR’s top three divisions, and no teams in the Monster Energy NASCAR Cup Series incurred any penalties for only the second time this season. The other two national touring series, however, weren’t quite as lucky.

The NASCAR XFINITY Series, like the Cup Series, also competed in Michigan, with two teams incurring penalties. The No. 20 Joe Gibbs Racing Toyota of Denny Hamlin was found to have an illegal splitter structure, an L1 penalty. NASCAR noted that the splitter itself was not flat. The team’s race finish is encumbered and crew chief Chris Gabehart has been fined $25,000 along with a suspension from the next two series events. The team also loses 25 NASCAR owner points.

The No. 00 Stewart-Haas Ford also received penalties after the XFINITY event. The post-race inspection found a loose lug nut on the Cole Custer-piloted Ford Mustang, which results in a $5,000 fine for crew chief Jeff Meendering.

Friday night only saw one Camping World Truck Series team hit with a penalty during inspections. The No. 02 machine of Austin Hill was found to have illegal body height measurements in post-race inspection. Crew chief Bruce Cook was fined $5,000 and is suspended for the next points event. The team also lost 10 driver and owner points.

So Reverend Gibbs is even cheating in the Busch series.

DISQUALIFY the 20 and give the win to the first legal car, Byron!!!!

If you want the post race inspections to matter don’t give a slap on the wrist to the Cup drivers and say “Oh please don’t do that again. Please?”

just have a real inspection before qualifying and impound the cars after they qualify. There’s no that a car should be allowed in the race with something like an “illegal splitter structure”. So what if they have to qualify with a race setup. Its not like anybody cares whether they set a new record in qualifying.

They cheat and still barely beat a rookie… these JGR guys make me laugh every week, they find a way to blow everything whether it’s a lead or a win… LMFAO !!!!!!!!!

Good grief…NASCAR goes overboard, people scream cheaters…does anybody know what the hell is going on???? I could care less about any of this..I see no “gotcha” or whatever….but…will NASCAR really stand firm with a real infraction at CUP level with THEIR FAVORITE TEAM? Probs not. Just sayin.

Every win by a cup driver in any lower series should be penalized.

What does “encumbered finish” matter to a guy who can’t collect points in Xfinity anyway? Seems a dumb and useless thing in this instance. And whatever happened to Nascar trotting out the illegal parts for all to see? There is zero transparency in Nascar’s inspection process and until that changes no one is going to take this seriously.

Bill B
Reply to  Sol Shine

Penalty for Cup driver should be that they are banned from running any more Xfinity races for the rest of the season.

Jackie
Reply to  Bill B

The splitter wasn’t flat- you can’t see that just by laying it on a table for all to see…..

Wow, I don’t know who are the biggest cheaters, “Tokyo” Joe or “Cheater-Chad”? My favorite “Tokyo” Joe cheatin’ event was from quite a few years ago, when NASCAR was doing some chassis dyno testing to see who might be doing a little cheatin’ on the engines. “Tokyo” Joe’s boys put spacers under the accelerator pedal, to keep it from going all the way down and opening the throttle plates, fully; thus, Joe’s T(u)RD engines would only rev to about 7000 rpm’s. Of course it took the keen-eye of the former NASCAR chief inspector, The Near-Sighted Mr. Magoo [John Darby] to find the spacers used by “Tokyo” Joe’s boys! LMAO over that one.

Bill B
Reply to  ddsbstrb

That was a good one but nothing beats Chad getting caught on cameral telling Johnson to make sure he wrecked the car if he won at Talladega a few years back. If I recall Johnson won and backed his car into the wall during his celebration. NASCAR did nothing.

And another one that I really liked, just because of the ingenuity involved, was the bleeding shocks. That would result in the car being lower during racing conditions but then be OK once the car was parked after the race.