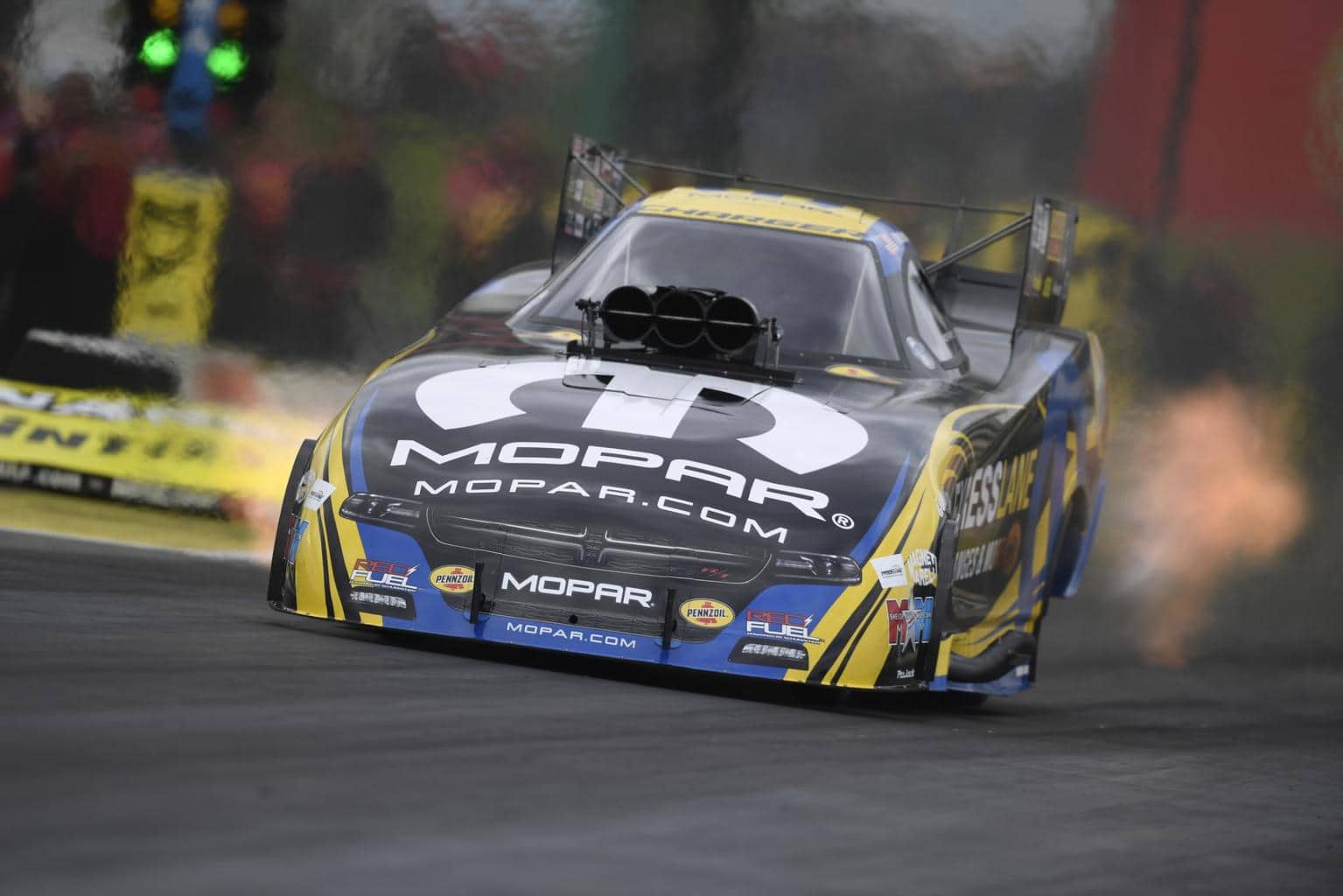 It was just six years ago that Matt Hagan made NHRA history the as first driver to ever post a sub-4.0 Funny Car run. Since then, drivers have been playing musical chairs with the NHRA record books – on a few occasions on the same day and in back-to back passes.

Three years in a row now, a national record has fallen at Topeka, and once again, the most recent honor goes to Hagan, who reset both ends of the record books with the quickest ET and fastest speed in NHRA history.

Let me rephrase that – Hagan didn’t re-write the record books, he downright blew ‘em up.

Hagan’s run in Saturday’s qualifying session clocked in at 3.802 seconds at the jaw-dropping speed of 338.85 mph. To put that in perspective, that’s two one-hundredths off the previous ET record of 3.822, set last year at Brainerd by – who else? – Matt Hagan. And the top speed was nearly three miles-an-hour faster than the old mark, again set by Hagan at Topeka just a year ago.

Hagan himself has reset the bar in the top speed records five times in the last two years alone. Last time, it was a jump of more than four miles-per-hour.

There’s been a little more competition in the race for the lowest ET, as Hagan and his Don Schumacher Racing teammate Jack Beckman, along with Kalitta Motorsports driver Del Worsham, have dropped the National Record nine times in the last year. Saturday’s record-shattering run was the biggest change since August 2016, when Worsham shaved three-hundredths off the ET record.

So the question now is – how low can they go??

Realistically, a sub-3.0 is out of the question, but six years ago who would have imagined that we’d be seeing NHRA Funny Cars on the cusp of breaking 3.8 seconds?? It’s not hard to imagine cars clocking in at 3.70 in the not-too-distant future.

Four In A Row For Capps

While Ron Capps hasn’t been able to get in on the fun of breaking Nation Records like his Don Schumacher Racing teammate have been, he’s still making his mark on the Funny car division this season, and he’s doing where it really counts – in the standings.

DSR driver Antron Brown claimed his first Top Fuel win of the season on Sunday as well – the sixth win in eight events for DSR in that division.

What we’ve seen so far this season – just eight races in – is that the only team that can stand in the way of DSR sweeping their way right into the Countdown is John Force Racing.

In the Funny Car ranks, only John Force Racing has been able to hold any ground against DSR, and JFR pilots John Force and Robert Hight are third and fourth in points, respectively, breaking up the DSR trifecta of Capp, Hagan and Beckman at the top of the standings.

Larry Dixon Makes The Most Of Top Alcohol Debut

It’s been two years since Larry Dixon won his battle against throat cancer, and nearly a year since he last turned a wheel at an NHRA event, but the three-time NHRA Top Fuel Champion shows no signs of slowing down.

This past weekend at Summit Motorsport Park, Dixon made his Top Alcohol Funny Car debut in the NHRA Lucas Oil Division 3 and went wire to wire to pick up the victory in his first time ever in a Funny Car.

Rampy Two For Two at Atlanta

David Rampy continues to flex his muscles in the NHRA Lucas Oil Series after taking home trophies in both Super Stock and Comp Eliminator in the Division II event last week at Atlanta Dragway.

Rampy already had a National Event Wally in his back pocket after beating out Jeff Longhany in the Super Stock finals during the 37th annual NHRA Southern Nationals two weeks ago at Atlanta, giving him a total of 94-career National Event wins to his credit.