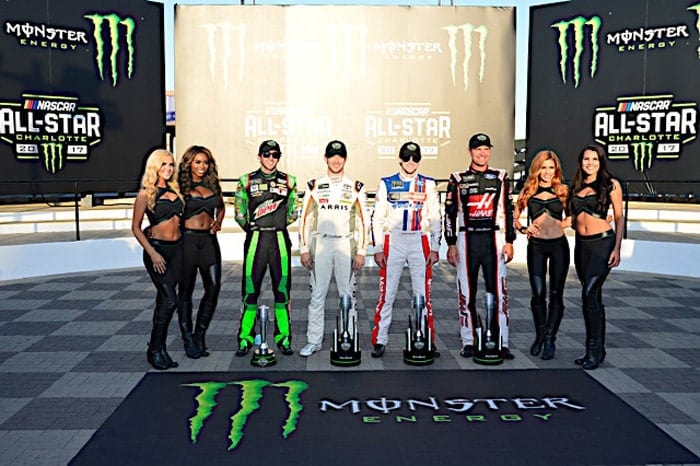 Cup Series: The Open Shines Again in All-Star Week – As three of the sport’s brightest young stars threatened to go three-wide across the start-finish in the closing laps of Saturday’s Monster Energy Open, we knew the proceeding All-Star Race had quite the act to follow.

Rookie Daniel Suarez may have not been a top pick to win one of the three Open stages, but that’s just what he did. Chase Elliott caught the Joe Gibbs Racing driver, battled to the inside for a solid 1.5 miles following contact through the quad-oval.

As they held each other up, Erik Jones kept it wound up on the high lane and flew to the inside to go three-wide as they crossed the finish line to take four laps to go. The No. 77 misjudged the alignment of the grass, however, which tore up the front of his Toyota, sending him in a four-wheel slide seconds later in Turn 1.

Any time you can even resemble the pass in the grass from 1987, you know you’ve had quite the wow moment.

And it wasn’t the only one of the 50-lap race, as Trevor Bayne pulled off what commentator Mike Joy rightly called a “super save” after contact from Danica Patrick. And Landon Cassill gave the underdog fandom a small window of hope after taking two tires to grab the race lead for the following Stage 3 restart. That ended abruptly, however, as spinning off the front bumper of Chase Elliott. You could smell the desperation.

So, much like the 2016 weekend at Charlotte Motor Speedway, the Open gave the fans more to remember than the main event. Take that as you please. –Zach Catanzareti

Camping World Truck Series: What a Season it has Become – While the XFINITY and Cup Series are well on their way to the halfway point in their respective seasons, the Truck Series just completed its fifth of 23 races on the schedule this year.

And what a season it has already become. Sure, there are only two series regulars that have visited Victory Lane, but the action on track has more than made up for it.

Typically the mile-and-a-half tracks don’t result in a ton of side-by-side racing, even in the Truck Series, and the field often turns out to be a snoozer. However, that hasn’t been the case in the last two races at Kansas and Charlotte, both 1.5-mile ovals. As I settled in to watch Friday night’s race, I prepared for a race to be dominated by Kyle Busch – which it was – and a mostly single-file parade.

Frankly, I’m glad I was wrong about the single-file parade. Sure, Busch stunk up the show, leading 90 of the 134 circuits, however the amount of two- and three-wide racing that happened back behind the leader more than made up for it. And kudos to FOX Sports 1 for spending more time on those battles this week. If this kind of action is what’s to come for the rest of the season, bring it on, because it’s going to be one heck of a ride. – Beth Lunkenheimer

Capps faced off against his teammate Matt Hagan in the Funny Car finals and had his work cut out for him as Hagan’s team had been knocking off fast times all weekend, including a new national record time of 3.802 seconds at 338.85 mph to claim No. 1 qualifier honors.

“I’m just the luckiest dude in the world,” said Capps. “I had nothing to do with it. I just stepped on the gas at the right time and held the car together in the right lane. We’ve won a championship for a reason and we’ve won four in a row together for a reason. Everyone just gels together.”

In Top Fuel, Brown faced off against Steve Torrence, who had been on a hot streak of his own, winning the previous two events and looking to make it three in a row. Brown foiled the three-peat hopes with a 3.709 second, 332.75 mph run to best Torrence’s 3.836 seconds at 256.70 mph.

18-year-old Pro Stock rookie Tanner Gray already had one win under his belt, but this time he found himself facing off against five-time class champion Jeg Coughlin,= Jr. He also found himself competing on a track where both his father and grandfather scored wins. No pressure there, kid. It turns out it was the veteran who committed the foul, as Coughlin red lit while Gray went on to run a solid 6.580 seconds at 210.87 mph to score his second win in just his eighth start in the class.

“I felt like I was pretty consistent all day,” said Gray. “My guys gave me a great racecar. I definitely wouldn’t be sitting here if it wasn’t for them. They put a lot of hard work into this new car. There’s no doubt we have a championship caliber team.”

Sports Cars: Wait, How Did Cadillac Racing Win by 46 Seconds in a One-Hour Race? – That is the question that a lot of observers at Canadian Tire Motorsports Park were asking on Saturday as Cadillac Racing’s No. 8 Cadillac ATS-V.R. won Saturday’s Pirelli World Challenge Sprint-X race.  The reasoning for such a large margin of victory? A very lucky full-course caution during a mandatory pit window in which the No. 8 driven by Michael Cooper was the only car that hadn’t pitted.

There are two important rules at play here.  First, Pirelli World Challenge Sprint-X races have a 10-minute pit window from 25-35 minutes where everyone must stop and make a driver change.  Second, teams in the GT Pro-Pro division must spend at least 60 seconds on the pit lane during that stop.  For teams in other divisions, it is a minimum of 90 seconds.

At Canadian Tire Motorsports Park, the time on pit road plus the time to slow down and speed up is essentially enough to cost someone a lap.  Cooper had started at the rear of the field due to not setting a lap in qualifying and was trying to stay out as long as possible.  Before he could stop, K-PAX Racing’s Ben Barnicoat was spun into the tires at turn 10 after contact from TR3 Racing’s Niccolð Schiro.

Cooper was effectively a lap ahead of the field when this happened and was able to make his stop under yellow.  Series officials chose not to do a wavearound, meaning that co-driver Jordan Taylor started at the rear of the pack with the lead.  Taylor simply cruised to victory from there. – Phil Allaway