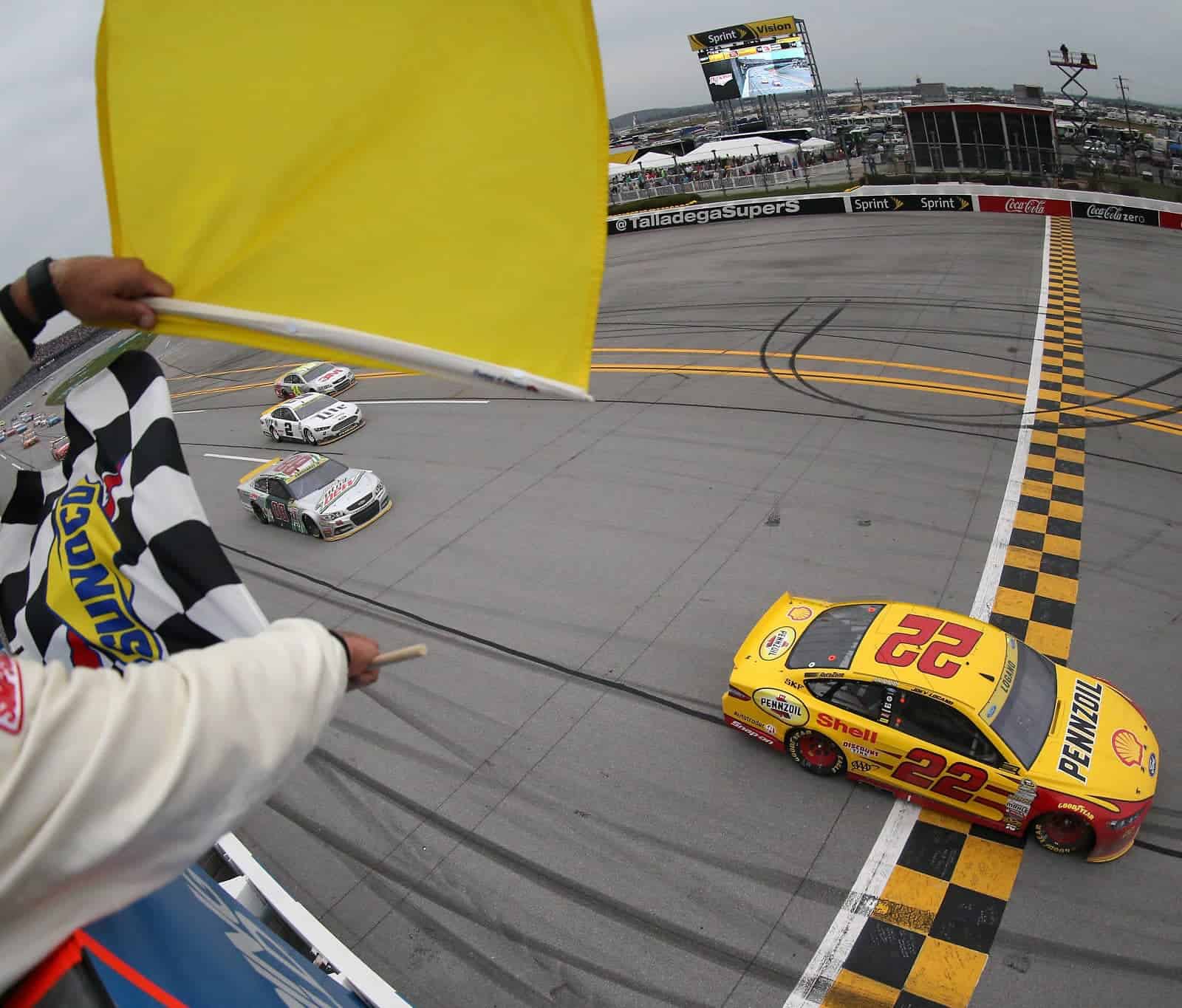 Will it Go Clean or Crazy in Talladega?

I may be in the minority here, but I don’t know what to expect this weekend at Talladega Superspeedway.

Everybody will be on edge when the Sprint Cup and Truck series fields take their green flags at the baddest, fastest track in the world. That includes a majority of the drivers themselves, whose Chase runs stand on the verge of split-second decisions.

With so much on the line at the 2.66-mile track, will everything hit the ceiling, or will it be saved for the final laps?

Looking over the past couple races at Talladega, we’ve seen the best of both. During last year’s fall race only Joey Logano knew his future, having won the two prior races of the Round of 12. Behind the No. 22, Dale Earnhardt, Jr. and Matt Kenseth were in must-win situations while the other nine drivers counted points.

What was expected to be a day for the survivors – similar to the 2014 Chase event – turned out to be a throwback to the early-2000s era of plate racing, as the race kicked off with a 132-lap green-flag run.

Now, following this year’s spring race, which had 10 cautions tear up a majority of the racecars on the track — including Chris Buescher, Kenseth and Kevin Harvick get airborne — we have a stable look at the nature of Talladega. It’s all up for debate.

With a tighter point gap this year over last, one issue we won’t find again is weather, which is one of the likely causes of the wild spring race. With a significant threat from Mother Nature, the whole race hit the throttle once the halfway point inched closer.

With that erased off the board, it’s a straightforward race to the end. Four-time Talladega winner Brad Keselowski is on the outside looking in while Austin Dillon and Logano are tied for the final Chase spot. And don’t forget Denny Hamlin, likely must-winner Chase Elliott and the other six competitors hanging on by points.

The rookie season of Chase Elliott has been one of hills and valleys.

At one point in 2016, Elliott had a streak of 12 consecutive top-20 finishes, earning a pole, six top 5s and 115 laps led in the process. However, the 20-year-old didn’t find the top 10 for eight straight races following the run, falling into dangerous territory in terms of making the Chase.

Fortunately for the No. 24 crew, Elliott turned things around just in time, grabbing two third-place finishes in the Round of 16 to easily advance into the Round of 12.

But the scale has seemed to tip the other way this round, with Elliott finishing 33rd and 31st in each of the two races at Charlotte and Kansas. These results have buried him 25 points below the cutoff spot of eighth with only Talladega yet to run before elimination.

Can he climb his way out on points or make his way to victory lane to stay alive?

Based off the car he’ll be piloting on Sunday, he has a solid shot. Not only has Elliott won two of the last three restrictor plate poles, but Jeff Gordon also won three of four in 2015, giving the No. 24 the last four consecutive Talladega poles.

Outside of qualifying, Elliott has transitioned well into race time. Leading 27 laps in the spring event, Elliott survived the chaos to finish fifth.

Whether or not a fifth-place finish on Sunday will be enough will come down to the finishes of his fellow Chasers. With a win granting him an instant waiver to the Round of 8, anything less will be out of his hands.

Not the best position to be for someone who, at times, has shown some of the quickest pace in this year’s Chase.

Is the Truck Series Round of 6 Already Set?

With a couple off-weekends behind it, the Camping World Truck Series joins Cup in Talladega, as two drivers will get the chop following Saturday’s Fred’s 250.

Following the opening two races from Round 1, William Byron is the only series regular to clinch his way through to Round 2 after non-Chaser Tyler Reddick grabbed the win at Las Vegas. That means we have a wide point race on the table for Saturday.

“Wide” may be the best word, as the actual point gaps are pretty spread out amongst the seven competitors. On the outside of the bubble, Daniel Hemric and John Hunter Nemechek find themselves 15 points behind sixth-place Johnny Sauter. Timothy Peters is 16 markers to the good, Ben Kennedy is 18 points up while Matt Crafton and Christopher Bell have 24- and 25-point gaps, respectively.

So with points rather stable entering Alabama, the odds of either Hemric or Nemechek winning their way in are about as likely as a non-Chaser taking it all by storm. Even if Peters and Sauter, who combine for three of the last four plate wins, crash out of the race, how many others were involved? And more importantly, would Hemric or Nemechek have enough trucks in between to truly benefit?

It’s one of the most difficult situations to be in: Win Talladega or hope your competitors crash out and you don’t. But that’s where Hemric and Nemechek are. Throw in Cole Custer‘s sour taste for Nemechek following their run-in at Mosport, he might as well close his eyes and hope for the best.

Will Haas F1 Score at Circuit of the Americas?

Unlike any U.S. Grand Prix at Circuit of the Americas since 2012, this year’s event will have a little extra flavor for the American crowd.

That flavor will come from the Haas F1 Team garage, the first-year U.S. team, which will make its first start on home soil on Sunday. Dubbing the weekend as “Haastin” on social media, the team has tackled the difficult task of competing in Formula 1 head-on as it rolls into the final few grands prix of 2016.

Last year, the Texan circuit had American driver Alexander Rossi on the starting grid for Marussia, earning his career-best F1 finish of 12th in the process.

This year, however, has an American team with two drivers who’ll bring a solid amount of momentum into Sunday. With drivers Esteban Gutierrez and Romain Grosjean making their way through the North Carolina and Texas areas – even making a stop at the NASCAR Hall of Fame on Tuesday – can they bring the VF-16 back inside the points?

Well, looking at recent performance from both men, points have been a tough bar to reach. Though the No. 8 chassis of Grosjean flew out of the gate with three points-earning finishes in the opening four rounds, the Frenchman has tallied only one top 10 in the 13 ensuing races.

For Gutierrez, the Mexican driver has managed four 11th-place finishes and nothing more during his return season to F1. So the potential could tip to Grosjean, who is making his 100th grand prix start. He could be the team’s best chance to add to its current total of 28 points in 2016.

Though it’s been a strong start heading in the right direction for the Gene Haas-led organization, a point finish on Sunday will be long overdue. But if momentum means anything, they may have something this time around.

Last time out at Suzuka, the team moved both cars into the Q3 (top-10) round of qualifying for the first time, starting ninth and 10th. Despite not transitioning into a point finish in the race, it was a bright spot on both sides of the garage.