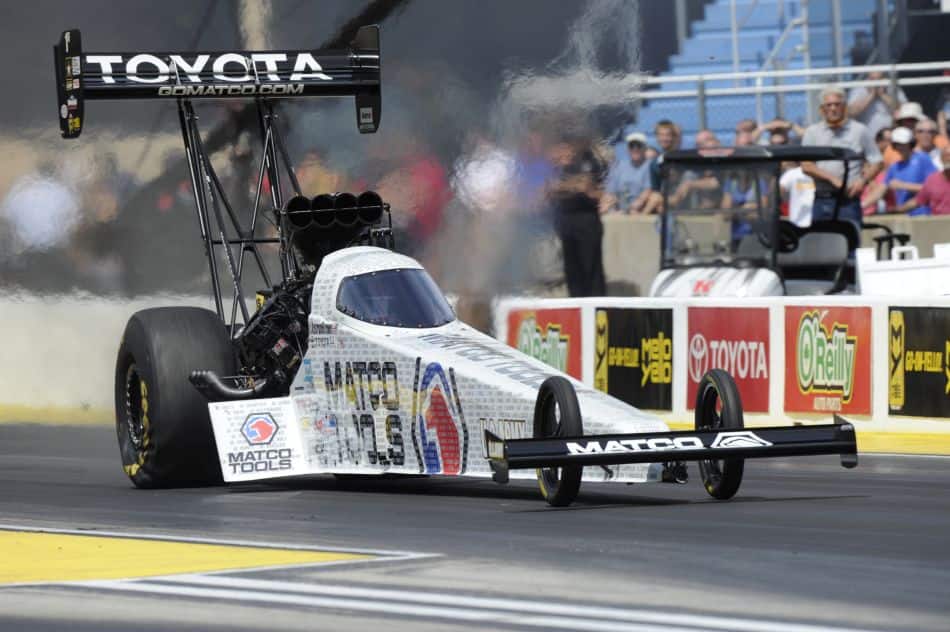 Am I the only one who sometimes feels like they are preaching their cause to stone walls? Everyone knows if you can just get someone to the dragstrip, odds are they will really enjoy drag racing. It’s that getting them to agree to go part that’s so difficult. Why is drag racing such a hard sell?

First off, before I get into this deeper, I want to say to both our editors and my readers, I am not throwing my fellow Frontstretch writers under the bus here, but simply using them as an example of my point. Besides, if I am throwing them under the bus now, know that I will climb under there with them shortly.

While Frontstretch covers many forms of motorsports and many series, I believe I am the only writer at present covering just one series and doing so as its sole contributor (I make a few stray appearances in our IndyCar section, but my regular work covers only NHRA). I also believe I cover the only series that shares so little DNA with the others we cover as to seem completely alien. There are other series on this site being covered primarily by one writer. Huston Ladner pretty much works solo on Formula 1 and Phil Allaway is our sports car guy. Yet, I think there are other writers on staff who understand enough about how those series work to cover for them if need be.

Not so when it comes to drag racing. If you were to ask them, and this is not to knock them, I would wager that most of my colleagues would readily admit that they have no idea about NHRA. There have been opportunities where I have been unavailable and I have offered up my race coverage and my column spot to other staff members, hoping to perhaps get at least one more writer interested, not because I want them to write about it regularly, but just as anyone who loves the sport would do, hoping to get one more person to love it like I do. I have offered to send them to the track, and even offered, if I can’t be there, to make sure there were others there who would help them find their way and teach them about the sport. Sadly, no one has taken up these invites.

I was the same once. I admit it. My husband has lived and breathed drag racing his whole life. We had a love of cars in common and our racing interests intersected at NASCAR, not either of our favorite racing series, but one we both at least casually followed. We were married for years, during which he tried every which way to get me interested before I finally ended up at the strip and fell in love with it myself.

It even goes back well before that, when my father and my brother went to Maple Grove maybe 15 years ago. They invited me to go with them knowing how much I loved motorsports, but I turned down the invitation, noting that I had zero interest in drag racing. They had a great time incidentally, and I missed out, not just on that event, but on all of the great racing I could have been enjoying all the years since then.

The vital question at heart here remains why is drag racing such a hard sell? People involved in the sport note all the time that they need to get people to the track to experience the sport in person, but why is that so hard to do?

Some things most people don’t know about Hector: Two wheels or four legs: Hector also enjoys horseback riding. Son Adam left the sport to pursue a career in the U.S. Coast Guard after the 2014 season, but otherwise the entire family is part of the operation. Hector tunes his bike and Hector Jr.’s bike, which keeps him pretty busy, but he likes it that way. He also likes the fact that he never has to wonder if everything is in order on Hector Jr.’s bike. He insures that it is because he does it himself.

Tim Wilkerson enjoys a large fan following because his small, independent operation competes with and beats the multi-car mega teams in Funny Car and also because he is a straight-shooter who will always give an honest answer, even if he thinks it might stir up trouble. We asked Wilk what he would change about NHRA drag racing if he could change just one thing and he answered in is usual candid fashion.

We’ll make this a double feature this week because the season is winding down and we have a number of great videos we would like to share before we go on the offseason break. When we posed the question to Wilk, he shot back with “Only one?” It seemed fitting to pair him with another driver who expressed the same sentiment, Pro Stock points leader Jason Line.

Word of the Week: Ladders

After qualifying, drivers are paired up for eliminations, with highest remaining seed facing lowest (1 vs. 16, 2 vs. 15, etc.) through the field. These pairings are then filled into a ladder, a traditional tournament-style bracket structure, with the winner of each matchup going on to face the winner of the paring next to them on the ladder. See below for the typical ladder structure.