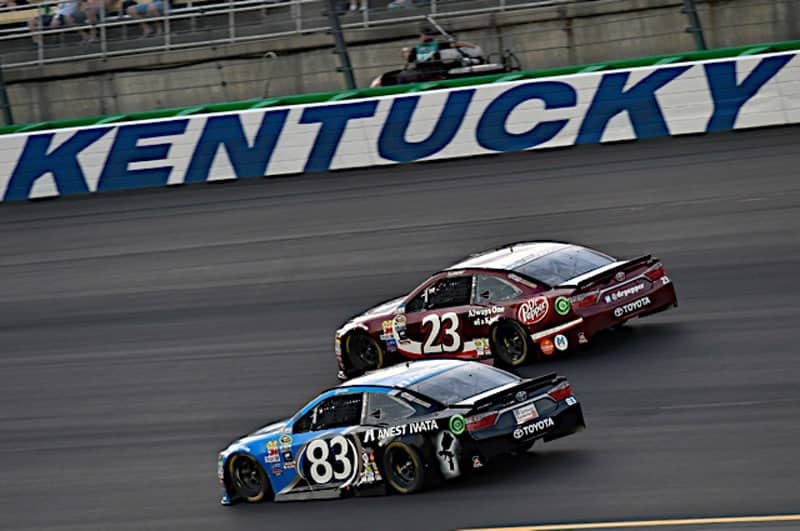 Many things have changed in recent years for David Ragan. Swapping race teams, adapting to different crew chiefs and starting a family has made for a busier lifestyle for the Georgia native.

2016 is Ragan’s first season with BK Racing, an organization that is trying to build resources to become a super team. On paper, adding the 30-year-old, two-time Cup Series winner to the organization was a high for the company.

Through 29 races, Ragan has yet to score a top-10 finish, something he has done nine consecutive years. The No. 23 car has a best finish of 16th coming in July at Daytona, where he was victorious in 2011 with Roush Fenway Racing.

Ragan is coming off a season in which he competed for three different teams, Front Row Motorsports, Joe Gibbs Racing and the now-defunct Michael Waltrip Racing. In the 36-race season he finished 27th in the championship standings.

But this year Ragan knew he was competing with a smaller organization trying to make it in the Cup Series. Along with Matt DiBenedetto, BK Racing is fielding two full-time cars for the fifth consecutive season, but the most steady driver lineup in its brief history. In 2014 the team had seven drivers fill those two cars in the same year.

This year, the team fielded four cars that qualified into the Daytona 500 and has raced three cars at four events. But BK Racing wants to make that next step up the ladder to becoming a competitive team.

“It starts with partners and creating a revenue stream that is consistent and able to spend the money that those top teams do,” Ragan said. “The only thing that restricts BK Racing from being bigger and better is zeros at the end of our budget. When you can’t hire the number of people that you need, you can’t do the testing that you need to do and you can’t buy the parts and pieces that you need. That’s where the speed comes from.”

Consistency is one of the things that Ragan hoped to bring to the team. So far, he has an average finish of 28.1, which is a career-best for the organization. Rob Devine, owner of BK Racing, has never had a driver on his team that has brought the knowledge that the veteran has.

“I think I’ve brought some stability,” Ragain said. “BK Racing has gone through some drivers and employees at a high rate over the years, and I think it’s good to have some consistency with Matt and I running all the races with the same crew chiefs and the same group of guys working on our racecars each week.”

Ragan and DiBenedetto have formed a friendship off the track that he believes has translate into on-track success. The No. 83 car finished sixth at Bristol in the spring, a career-high for the team. Small on-track victories boost the confidence of the team members at BK Racing. In fact, at New Hampshire in July both cars made the second round of qualifying, a first in team history.

“With a big organization you’re expected to do well because you have the resources and you have the budget,” Ragan said. “You have the best of the best. On days that we can overachieve, those are small victories for a small team.”

Sitting 31st in the championship standings, the final seven races of the season are a building block for Ragan and BK Racing. With plans unannounced for 2017, getting good finishes and finishing all the races is something that the team wants to work on.

Compared to the eight laps Ragan has paced the field for this season, he has five DNF’s, three due to crashes. With limited chassis in the Charlotte, N.C. race shop, crashing out of races puts the organization in a week-to-week deficit.

“So many people are focused on the championship as they should,” Ragan said. “It’s important for those guys that aren’t racing for a championship to end on a good note and have some fun. It’s a long season and it’s even longer if you’re not having any fun the last seven to eight weeks.”

As Ragan has become a veteran of the sport, he has focused on building a family. Introducing his second child into the world in June, family has become the main priority for the 11th year driver.

Racing controlled Ragan’s life while rising the ranks, reaching the top division of motorsports. His entire childhood he looked up to father Ken Ragan, who competed in 50 Cup Series races with a best finish of 11th at Talladega in 1984. Whether it be Ragan’s grandfather, father, cousins or himself, he has always ventured back to racing. Now, he is giving back to the sport.

“We enjoy motorsports and if I’m not racing in the Sprint Cup Series, I’ll still have a tie to motorsports in some way shape or form,” Ragan said. “There are some really smart individuals and great drivers and mechanics that aren’t in the Sprint Cup Series. There are some great guys that are at the local short track that could rival any of the guys that race on Sunday but they choose not to.”

Since leaving Roush Fenway Racing at the end of 2011, Ragan has six top-10 finishes, including the victory at Talladega in 2013. However, in recent years there have been frustrating days at the track, but having a family has calmed the driver.

Along with wife Jacquelyn, Ragan goes home to two daughters after a long weekend at the track, which makes the bad days good again.

“I don’t really like coming to the race track or early or staying late because I want to get home and see my family,” he said. “I think that’s the case with any job. I think that when I’m at the race track and I’m in practice and at my competition meetings on Mondays, I’m focused on my job and that hasn’t changed.

“Bad days are always going to be bad, but you have to put things in perspective. You’re older and more mature. It doesn’t matter how bad the racing world is or how great the racing word is at the end of the day it doesn’t really matter.”

Ragan has been competing in the NASCAR community since 2004, including 10 Truck Series races and one XFINITY Series event. Three of his four career NASCAR wins have come in restrictor plate races,  and he narrowly missed out on winning the 2011 Daytona 500 due to a late race penalty while leading.

Regardless of how many wins he ends his career with or how many times he fails, he hopes to have an impact on the sport that he’s given his life to.

“Professionally, I would like to be remembered as a good racecar driver and someone who had a passion for motorsports and gave it his and all and worked hard,” Ragan said. “I would love to have a bunch of championships and a bunch of race wins and I’m still working on that. It’s not all about what your stat book says. There is more to your career then what the results show.”