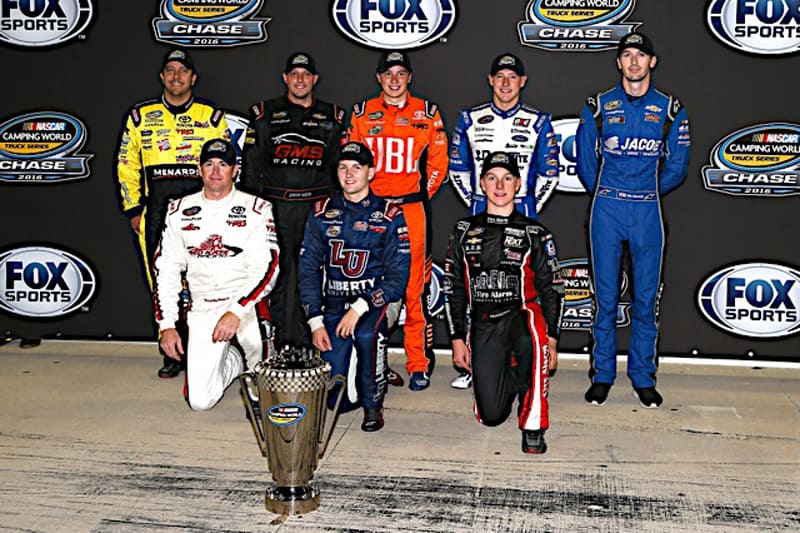 When NASCAR announced it was expanding its Chase playoff system to the XFINITY Series and Camping World Truck Series earlier this year, fans weren’t sure how to react. On one hand, the Chase awards a championship based on the performance of seven races, and many wonder whether that cheapens the championship.

On the other hand, the Chase does away with runaway title performances, and keeps teams on their toes. No longer can a driver write off a bad race or two. They have to go for everything at every time, and if something goes south, well … better luck next year. Or win. Winning is always good.

If the Sprint Cup iteration of the Chase – the one which the NXS and CWTS is based off of – is any indication, the next nine weeks should be filled with intrigue and drama. On the XFINITY side, 12 drivers will battle through three rounds, with eliminations occurring after races three and six. In Trucks, eight drivers are eligible for the championship, with eliminations also occurring after races three and six.

Both series are filled with great talent, and both should put on a great playoff hunt. But which one will ultimately be the one to watch?

The Truck Series has really grown into its own the past decade. No longer is it a series for the older vets to dominate – although there are plenty of seasoned drivers in the 32-truck field. Rather, it has become a true stepping stone on the way to Cup, with a third of the field or more seeming to make their first start at whichever track the series happens to be visiting.

It is that combination of youth and experience, plus the parity of teams represented in the Truck Chase, that will make NASCAR’s third-tier title hunt the one to watch.

Think of this: rookie wunderkind William Byron, driving for Kyle Busch Motorsports, winner of five races already this season, and abandoning the team to run for JR Motorsports in the XFINITY Series next year, running for his second consecutive NASCAR title to go with the one he won in the K&N Pro Series East last year.

Matt Crafton, two-time Truck title winner for ThorSport Racing, who has had an uncharacteristically meh season – one that’s seen him win only twice and rack up only 11 top 10s.

John Hunter Nemechek, the most polarizing driver in the garage right now, with two wins driving a largely underfunded truck for his father’s race team.

Christopher Bell, who hit everything he could in the early part of the season but eventually joined teammate Byron in victory lane at Gateway, proving he could race on asphalt as well as he could on dirt.

Johnny Satuer, who clinched his Chase spot early with a win in the season opener, driving for GMS Racing and trying to prove that moving from ThorSport was indeed the right decision.

Ben Kennedy, kin of ‘Big’ Bill France, who also races for GMS, and who broke through to victory lane at Bristol a couple of weeks back. He started the season driving for Red Horse Racing but was dropped after only a handful of races.

Daniel Hemric, who didn’t win any races for Brad Keselowski Racing still managed to find himself tied for the points lead with Byron following the Chase cutoff race at Chicagoland.

And rounding out the field is Timothy Peters, Red Horse’s steady driver who is usually good for a win or two a season. Without a victory yet, might Peters be the underdog heading into the final seven races? He’s won at Las Vegas, Martinsville, Talladega and Phoenix – all tracks in the Chase.

Young and old, new teams and established teams, and six drivers in the title hunt who have won a race. Given that Cup drivers race less in this series than they do in the NXS, it should be expected that these drivers will contend for round-advancing wins. Plus, having only eight teams make the playoffs means there are good teams on the outside that want to prove they should have been there in the first place.

But no matter who wins the races, it’ll be the field as a whole that puts on the more intriguing show over the NXS contingent.

Prior to the 2016 NASCAR XFINITY Series season, NASCAR announced they would switch to a Chase format for the first time in the series. This weekend at Kentucky Speedway will mark the first ever Chase race and I can’t wait for it. I think the Chase for the XFINITY Series title will be better to watch than the Truck Series chase because it will take consistency to win the series.

I’m an old school race fan. I always have been. I wonder about why NASCAR can’t go back to more short tracks, why we use lasers to measure cars and why do we feel it’s necessary to have competition cautions. I think the Chase in the XFINITY Series will sort of have an old school feel to it because it will take consistency to win the championship, rather than just victories. That is how it used to be.

Wins will still be important but the ultimate key to the championship will be consistency. Let me explain what I mean.

As we enter the Chase only three NASCAR XFINITY Series Chase drivers have victories: Erik Jones, Elliott Sadler and Daniel Suarez. Jones has won four races this season and is the odds on favorite to win the title. Should Jones stumble with consistency, which he has done this season, it could open up the door for others. Sadler won at Talladega and Darlington and JR Motorsports has found some speed in recent weeks. Suarez’s win came at Michigan is his lone victory of the year. The other 17 races were won by drivers who were not running for points in the XFINITY Series.

There are three rounds in the Chase:  The Round of 12, The Round of Eight and The Final Four who will run for the championship at Homestead-Miami Speedway on November 19th. The easiest way to advance to the second and third rounds is to win. The final race of the Chase is at Homestead and drivers who were in the 2015 Chase for the NASCAR Sprint Cup are not allowed to race in the championship event. It means Kyle Busch, who has dominated the series, will not race. However, the rule doesn’t eliminate Kyle Larson, who by not qualifying for the 2015 Chase would be eligible. Homestead is one of Larson’s best racetracks. Larson has the talent, the team and the experience to race up front all day long at Homestead. It’s going to be a tall task to wrestle the victory away from him, which makes consistency all that more important. If you can’t win, the goal is to score the highest finish possible.

In the other seven races of the Chase defending Cup Series champion Busch will drive in the majority of them. Busch has won an astounding eight races in the series this season in just 15 starts. Over the past four seasons he’s won 33 of the 82 races he’s entered. If Busch starts the race, it’s very likely he’ll win it, which means in the other seven races, good luck to the Chase competitors. That will make every position and every spot mean so much.

Victories will matter much more in Trucks than in XFINITY. There’s not the Cup invasion in the Truck Series like we see in the XFINITY Series. Busch is the only Cup driver to run a Truck race this season and has only won two of them. If you’re 8th, you might as well try for the win because it’s highly likely that the Chase competitors will be running for wins. It won’t be that way in the XFINITY Series and that should make it interesting to watch because teams will try and get as many points as possible to move on.

It depends on which series has the most Cup drivers taking wins away from the series regulars. The series with the least amount of Cup drivers will be the best.

I agree . I think the Chase Races in The Xfinity & Truck Series, THE CUP DRIVERS SHOULD BE BANNED FROM RACING. One of the series will most likely have a Champion with No Wins. Real Interesting.
MORE LIKE BORING…………….

If anyone is interested here is an in-car video of the winged super modifieds at Oswego Speedway last year for the September race.

The funnest part of the Chase will be watching for Cole Custer to take out John Hunter Nemechek. Not if, but when and where.