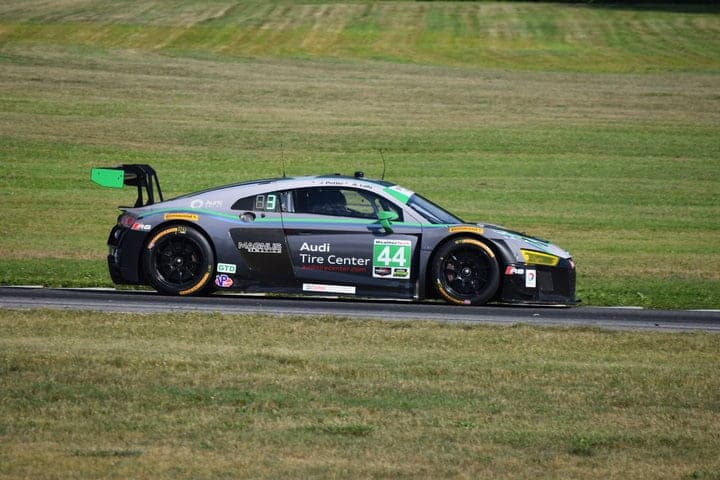 Last weekend, Magnus Racing‘s No. 44 Audi R8 LMS GT3 of Andy Lally and John Potter finished third in GT Daytona in the Michelin GT Challenge at VIR.  However, in post-race inspection, the No. 44 was found to have violated IMSA’s ride height regulations and as a result, was excluded from the weekend.

Naturally, that would get a race team riled up.  This situation was no exception to the rule.  On Friday, Magnus Racing released a statement detailing their opposition to the ruling in a way that only Magnus Racing could do it.  It is 1700+ words in length and includes video evidence, not to mention a picture of an unidentified person holding a penny in an attempt to show how much out of compliance they were.

According to the team, the vast majority of the car was legal ride height-wise.  The exception to that was one small point near the center of the splitter, about a foot back.  That one area flunked by a shade over one millimeter.  According to IMSA Technical Bulletin 16-37, minimum ground clearance for all cars in GT Daytona is currently 5o millimeters.

Team owner/driver Potter is very unhappy with the situation.

“Disappointment is not the right word, I’m flat out shocked with how this whole affair has been treated,” Potter stated.  “We’re the first people to advocate for rules being followed, we have zero history of disqualification, and within IMSA’s own precedent we were able to demonstrate what led to the ride height failure, and yet this is all just being ignored and we’re basically not able to contend for a championship we’ve fought hard for. This isn’t just a decision that takes away a podium, this is a decision that ruins an entire season’s worth of work, over something that is bothdebatable and with a completely disproportionate punishment. While we do appreciate IMSA’s efforts over the last two days to re-evaluate, we are fundamentally upset with how this has been handled and the inability to do anything about it.”

Magnus Racing’s opinion is that the infraction was not intentional, but caused by casual contact on-course.  In particular, they cited contact on the first lap with the No. 23 Alex Job Racing-Team Seattle Porsche driven at the time by Mario Farnbacher, which can be seen below in a video posted by the team to YouTube.

In addition, the release states that IMSA has a history of granting waivers for ride height violations with visible damage.  Magnus Racing received such a waiver at Circuit of the Americas in 2014 after contact with Turner Motorsport‘s No. 300.  Other teams have been given similar dispensation in the past.

The exclusion from VIR dropped Lally and Potter from second, nine points behind Scuderia Corsa‘s Alessandro Balzan and Christina Nielsen to 40 points back in sixth.  It has effectively removed them from any championship contention.  Despite the penalty, Magnus Racing will contest the two remaining IMSA weekends at Circuit of the Americas and Road Atlanta.  This is in contrast to recent moves from Alex Job Racing and Park Place Motorsports to sit out races voluntarily.