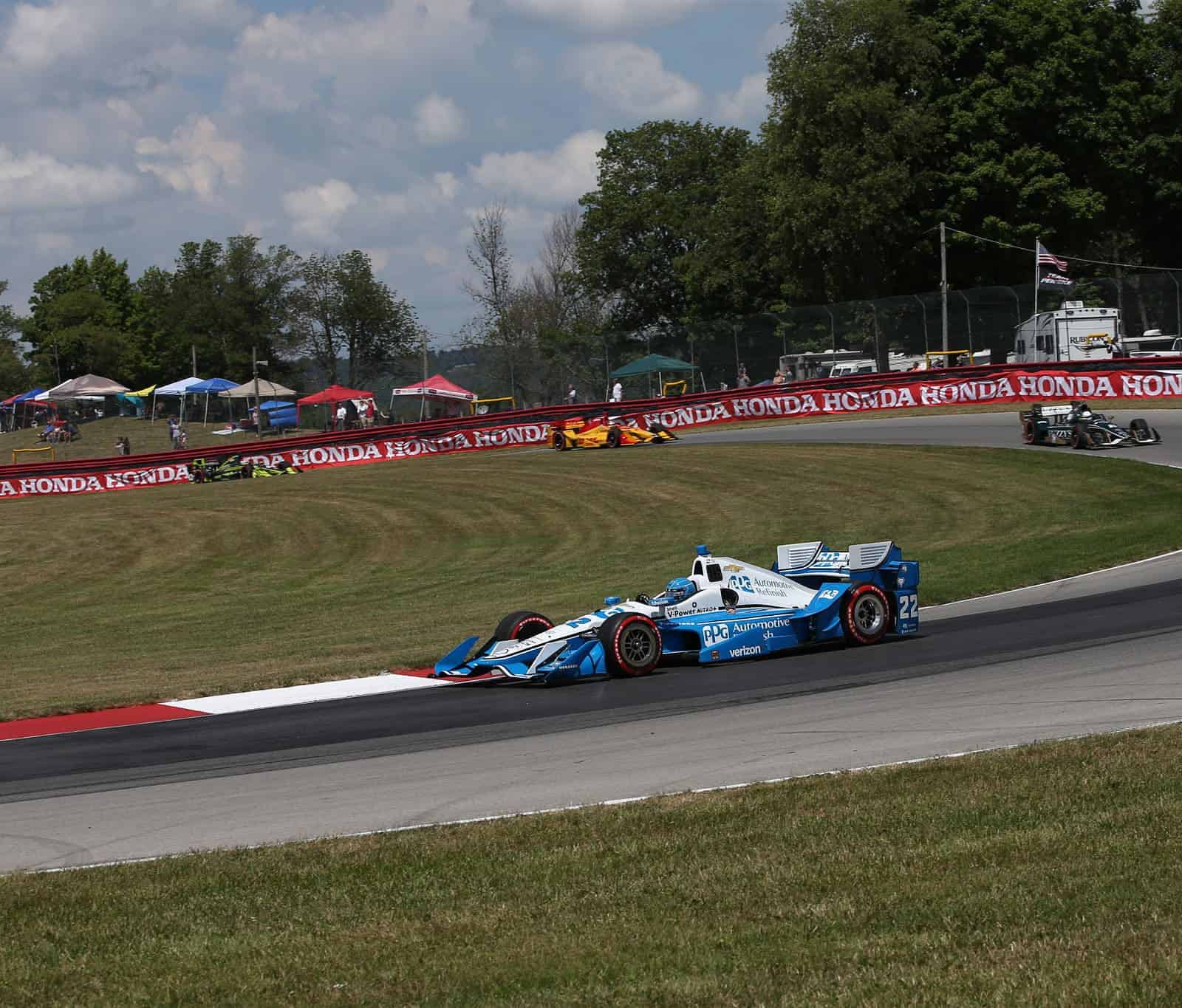 Simon Pagenaud and Will Power have spent the better part of the last month fighting among themselves for position on the track and in the points standings. The battle continued to rage on at the Mid-Ohio Sports Car Course, with the Team Penske teammates bouncing off of each other twice before Pagenaud prevailed for the position and, ultimately, the race win in Sunday’s Honda 200.

“It was an awesome battle with Will there,” Pagenaud said. “I knew that was my chance on that restart, it was time to go. It was a pretty interesting lap, fun driving like that. That’s racing. It was fair, it was clean, it was hard racing.”

“I was sleeping on that restart and I regret that,” Power admitted. “I should have been on it, then I got marbles on the tires. It was a good, clean battle. It was tough but it sucked finishing second, all the effort you put into that race.

“But Simon did a bloody good job and it’s turning into a pretty good battle.”

Pagenaud and Power’s championship war has continued to build over the summer, with a seeming inevitability surrounding the battle’s crescendo, and while non-Penske enthusiasts previously may not have wanted to watch the two trading blows down the stretch, after Mid-Ohio they’d be best off to root for both drivers to succeed.

Why? Well, quite frankly, they’re the only two left in the hunt.

Just two rounds ago the championship battle seemed to involve as many as six drivers. Josef Newgarden dominated at Iowa Speedway to surge into the hunt. Helio Castroneves was using consistency to overcome yet another winless year. Tony Kanaan was strong – if lacking for a bit of speed – and Scott Dixon was doing what Scott Dixon does best, lurking just at the edge of the points with the summer stretch approaching.

Yet, just one month later, all of those drivers are trapped on the outside lurking it.

Things began to fall apart with Newgarden. The Tennessean crashed out of the July 17 Honda Indy Toronto after only 57 of 85 laps, finishing 22nd and effectively dropping out of the points race. Meanwhile, Castroneves stayed alive with a podium, as did Kanaan and Dixon with finishes of fourth and eighth, respectively.

Then, along came Mid-Ohio.

The issues began early, with Castroneves and Dixon colliding on the 2.258-mile road course on lap 15. Dixon got the worst of the incident, forcing the New Zealander behind the wall for several laps as his Chip Ganassi Racing crew worked on his No. 9 Chevrolet. Dixon would finish 22nd, last on the field.

Castroneves continued on, only to find issues of his own after going off-course later in the race. The Brazilian stayed on the lead lap, but rose only to 15th.

As for Kanaan, the 2013 Indianapolis 500 champion simply struggled early and often, finishing 12th after hemorrhaging track position on each green-flag run.

The poor finishes for each championship rival has placed Power and Pagenaud up for a duel to the finish.

After taking the pole and winning the race, Pagenaud’s points lead surged to 58 markers over Power and 111 points ahead of third-place Castroneves. The Frenchman has a full race – even for the double-points finale at Sonoma Raceway – over anyone outside of Power.

Impressively, Power continues to keep the points lead close despite missing the season-opening event at St. Petersburg, Fla. The Australian’s three wins and six podiums trail only Pagenaud on the grid, with both stats good for double the totals of any other driver in the paddock

With their competitors gone, a prize fight has shaped up to try to give Team Penske their second championship of the decade.

In one corner sits the resilient Pagenaud, finally making good on years of potential with occasional flashes of greatness amid an extremely consistent season. Resting in the other corner is Power, a former champion bouncing back from an issue outside of their control.

Sure, there’s still an outside chance one of the other drivers can join the championship battle. There are still four rounds left in the championship, after all. But as the weeks begin to wind down and both Penske driver continue to deliver solid results the barrier for entry from any other team rises a bit more.

If nothing drastic happens at either Pocono Raceway or Texas Motor Speedway, it’ll be time to acknowledge that either Pagenaud or Power will take the 2016 IndyCar championship, and given the way the last few IndyCar seasons have ended, the prizefight will likely come down to the final round.