We have a great debate about NHRA’s Countdown championship format on our hands here. It’s called KB Racing. Jason Line has won five of eight races so far this season and his teammate Greg Anderson has won the other three. Third driver, Bo Butner, has also seen some final round action. As a matter of fact, only Chris McGaha and Drew Skillman have made it to the end round to try to take them on, with McGaha taking on Line in a losing effort in Phoenix and both McGaha and Skillman going down to Line and Butner are the 4-Wides.

The result of this domination is a KB stranglehold on the Pro Stock points standings, with Line atop by 126 over Anderson. Butner is 328 behind in third and a fourth place tie between Allen Johnson and Drew Skillman, 477 back, marks the first non-KB Racing drivers in the standings. A runaway just eight events into the season.

Enter the Countdown. No matter how much KB dominates now, after the U.S. Nationals, the points will be reset and the top ten will be closed up for a six race battle to the championship. Consider the fact that this format gives the other teams all summer to keep working at the combination. Shane Gray qualified just behind the KB trio in Kansas, showing that the gap could possibly be closing.

With no points reset, it’s a hell of a lot of ground to make up, even with two thirds of the season to do it. With a points reset, and the time before that happens to get a handle on the new EFI combination, no one in the top ten is out of contention for the championship just yet, regardless of how far ahead the KB racers are right now.

What it comes down to is if you are a fan of the KB drivers or just appreciate that they worked really hard to figure out this package and get ahead of their competitors, you probably hate the fact that it could all be for nothing because all of those other teams will be caught right back up to them. There exists the potential that all that hard work won’t result in a championship for them.

On the other hand, if you are hating Pro Stock this year and feel that the KB guys are stinking up the show, you can’t wait for that reset and you are desperately hoping your guy, or gal, gets it figured out by then.

The Countdown format has always sparked debate (yeah, just like that other format in that other racing series does). It would be interesting to hear how that debate figures into the discussion about Pro Stock this year. Did you like the format or dislike it before? How do you feel about it now?

* Shirley Muldowney continues to recover at home from surgery last week to remove part of her right lung after doctors discovered she had a tumor. Surgery went well and tests show the growth was not cancerous. 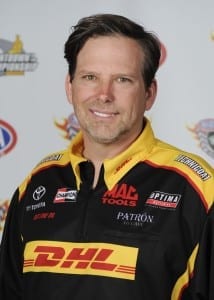 1993 – Ran partial schedule while splitting time between a Funny Car and a Top Fuel dragster.

1991 – Won NHRA Rookie of the Year; youngest driver to ever win a Funny Car event at 21-years-old.

A Few Things Things Most People Don’t Know About Del: Del has twin daughters, Katelyn and Madelyn, who are running Junior Dragsters. Del loves going out on his boat. And finally, Del has a 10,000 horsepower margarita machine powered by one of the engines from his Funny Car. He doesn’t bring it to the track on a regular basis as he used to, mostly for liability reasons in an open pit area, but he still brings it out for special occasions.

Alexander Rossi’s feat of winning the Indy 500 as a rookie is certainly impressive. The thing is, while he’s a rookie in IndyCar, he’s been driving racecars for years, including in Formula 1. What about winning a race as a rookie after just a handful of starts in any kind of car? And what if that car was a Nitro Funny car. Del Worsham explains how he did just that.

Word of the Week: Nitromethane

Nitro for short, it’s the fuel that Top Fuel and Nitro Funny Cars run on. Nitromethane is produced by a chemical reaction between nitric acid and propane. There’s nothing like watching someone get their first good whiff of Nitro in the pits! Get you some of that! It’s a rite of passage.

Have liked seeing NHRA after NASCAR ‘ TPed and shown in the. Middle of the nite is the pits ! Just sayin!

My scar is still fresh from divorcing myself from NASCAR championships and racing so of course I won’t buy into a so called playoff style championship in any series. What is different to me is the actual races themselves. NHRA would have a hard time manipulating a race to make it more exciting, they can’t throw a caution flag because one car spins it’s tires and there isn’t a close finish every time. Every race still has integrity and the officiating seems logical and reasonable. I watch NHRA for the race, not the championship. I would like to know more about the tires but never hear about them. You would assume they would want a new set every time but I get the impression they reuse tires. Where is the advantage, stickers or scuffs?