This weekend brings the most unusual event of the season on the NHRA Mello Yello Drag Racing Series schedule, the Four-Wide Nationals from zMAX Dragway in Charlotte. This is the only four-lane drag strip in the world, likely because only Bruton Smith could conceive of such a concept. He’s probably also the only guy in the world who could talk a series into trying such a wild idea, but this is the seventh such edition so it must be working. Also, Smith just has a way of getting what he wants.

First off, get used to the term quad. You will hear it a lot as drivers race in quads instead of pairs. Also get used to the idea that drivers can lose and still advance because the second-place finisher from a quad moves on along with the winner. There could be a lot of pedaling, more than normal, because while a driver might see one competitor drive off and leave the rest behind, there’s still that second spot to fight for and none of them can see what’s happening on all four lanes.

Lane choice is a four-way question, with choice going from the fastest in the quad to the slowest guy, who essentially gets stuck in whatever lane is left. Qualifying is a dance where drivers get to rotate, and if all four rounds are run, they get one pass in each of the four lanes.

On the other hand, it does tend to move the proceedings along at a rapid clip, since a round of qualifying happens in four passes instead of eight. Eliminations drop from four rounds to three as well.

All of the confusing, one-time per season differences aside though, if you are going, you are going to be treated to quite an experience because it’s impossible to explain what 40,000 horsepower going past feels like. We’ll see you at the strip this weekend!

* Leah Pritchett will race at the 4-Wide Nationals driving a Top Fuel dragster owned by the Lagana family and with sponsorship from FireAde 2000. Pritchett, winner of the second race of the season in Phoenix, suddenly found herself without a ride and without a plan when team owner Bob Vandergriff announced his immediate retirement from the sport and the closure of his team last week.

Pritchett scrambled to put something together in time for the Four-Wide Nationals, but recognized the importance of making it to the track.

“Having partners able to come in clutch at the last moment enables me to enter one more race at this time and will help me stay relevant in the NHRA Mello Yello Series championship point standings,” she said. “This will also buy me a bit more time to work on sufficient funding for the rest of the season to compete with a readily available team.”

* Tim Wilkerson will be joined at the Four-Wide Nationals by his son Daniel, who will drive a Funny Car owned by Brian Stewart. Daniel last competed in an NHRA Mello Yello Series event at St. Louis in 2013. 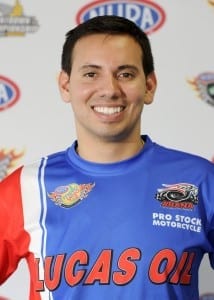 2011 – Earned Auto Club Road to the Future Award as NHRA’s Rookie of the Year; won three times on the way to a second place points finish.

Some Things Most People Don’t Know About Hector: Hector’s younger brother Adam was part of the family team as well but left NHRA drag racing to join the Coast Guard. Hector and Adam both started racing in the first place because they wanted to spend time with their father, Hector Arana, Sr., who also competes in the Pro Stock Motorcycle category. Two years ago at Chicago, the father son duo faced off in the finals for the first time ever, with the win going to Hector, Jr. They repeated the matchup last year in St. Louis with the win again going to Hector, Jr. The career best speed listed above is not just Hector Arana, Jr.’s best speed, it’s the best speed for anyone on a Pro Stock Motorcycle. It is the current national record.

Word of the Week: Holeshot

This term refers to the advantage gained by the driver with the better reaction time who gets off the starting line first. In some cases, this advantage is enough to get the win over a driver who actually had a quicker run (lower E.T.), but could not overcome the starting line advantage. This is called a holeshot win. To make matters even more interesting, in a four-wide situation, it’s possible to see a double holeshot, where two drivers with better reaction times beat a driver who made a quicker pass. This is one of the fun quirks on tap with four-wide racing.