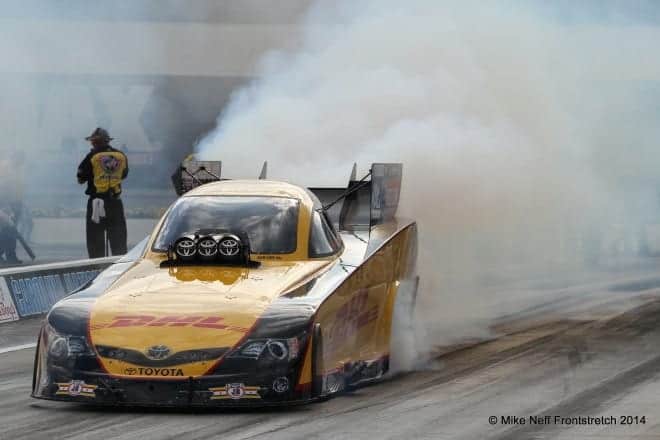 It seems like just yesterday that teams were arriving in Pomona, ready to start the 2015 season. Everyone was full of optimism and everyone, on paper at least, had an even chance of being the champion at the end of the season. Now teams are pulling in to Pomona again, but this time it’s to close out the season.

Two champions have already been decided but there are two more up for grabs in the Mello Yello Series. Three drivers have a shot at it for each. Will it be Del Worsham, Jack Beckmanor or even Tommy Johnson Jr., who is still alive in the battle, taking home the Funny Car hardware? In Pro Stock Motorcycle, Andrew Hines, Jerry Savoie and Eddie Krawiec will be battling it out.

Pro Stock already has a champion, but there is still an occasion to mark as significant rule changes in the class mean that this is the last race for the configuration we’re used to seeing. It will be a new chapter next year.

For the future stars, drivers fighting it out for the Auto Club Road to the Future award have one more race to show why they would be deserving of the recognition as rookie of the year. It will be interesting to see how their rookie years stacked up against their expectations whether the take home the award or not.

It seems like 2015 just started and here it is about to conclude. Don’t worry, though. Teams will be pulling into Pomona before you know it, ready to kick off 2016, full of fresh promise and with the optimism that this will be the year they win a championship.

2013 – Four runner-up finishes; first career No. 1 qualifier at Englishtown; earned a spot in the Countdown to the Championship.

Some things most people don’t know about Clay: Crew chief David Grubnic is a former driver, something that Millican finds a great asset as far as communication and understanding goes. Millican has noted that often a driver feels some pressure to be perfect and not screw it up when the crew chief puts the perfect tune-up in the car, and if something does go wrong, it can be difficult to explain. Millican has found this much easier with Grubnic, who has assured him he’s already pretty much done all of those things behind the wheel himself.

Team owner Doug Stringer might be a familiar name to NASCAR fans. Stringer was involved for many years, along with sponsor Great Clips, in NASCAR’s Xfinity Series. His roots are in drag racing and he realized one of his dreams by returning to the sport with newly formed Stringer Performance and Millican this season.

Millican has not won an NHRA Top Fuel race, but he’s no stranger to winning, with six consecutive IHRA Top Fuel world championships (2001-2006) to his credit. He is the winningest Top Fuel driver in IHRA history with 51 wins, and in 2003 advanced to every final round during the season. In 2002 he set his career best with 11 wins on the season, an IHRA record. He is also the IHRA world record holder for elapsed time and speed with 4.48 at 328 mph.

Robert Hight has this week’s tech fact about Funny Car engines, how often they need to be changed out, what gets changed between runs, and what happens to all those engine parts after each rebuild.

This is it! Just one more race left on the 2015 schedule. The NHRA wraps up the year at Pomona with the Auto Club NHRA finals this weekend, Nov. 12-15. This will be the final show on ESPN.