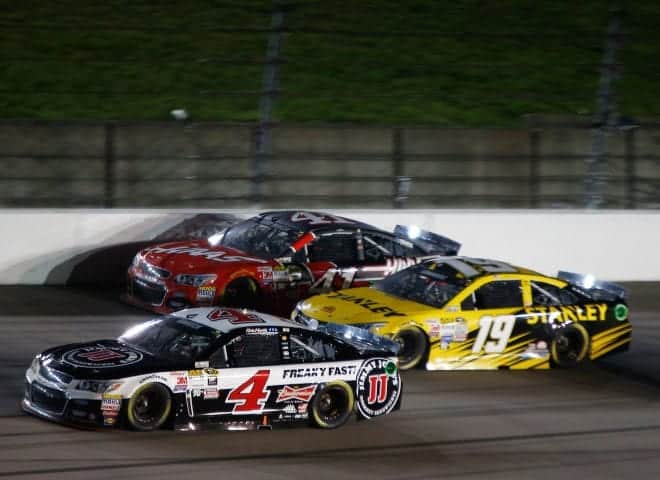 Let’s be frank: This weekend is the last normal chance for a driver to win his way into the Chase for the Sprint Cup’s penultimate round.

And you already know what I mean. Next weekend, the NASCAR Sprint Cup Series will descend upon Talladega Superspeedway in the final race of the Contender Round before NASCAR lops off four more drivers from the Chase field. It’ll be the final chance for a competitor to take advantage of the win-and-you’re-in scenario or simply make their way in on points (aka, being part of the top eight, win or not), but Talladega, like its superspeedway co-conspirator in Daytona Beach, is unpredictable; even if a giant wreck doesn’t happen and take out half the field, the contents of the top 10 could change on a whim thanks to drafting. It’s not a total crapshoot, but it’s the closest to that sort of thing we’ve got.

So yeah, Kansas Speedway. A little more regularity going on there.

You’ll recall Joey Logano and crew chief Todd Gordon’s excitement at winning Charlotte Motor Speedway last weekend. Yeah, the No. 22 has been the class of the field all season, but a win ensures safe passage, meaning Logano could go offroading on the first lap of Talladega, do a barrel roll, walk to the garage, drink a couple Miller Lites in the infield with the fans for the rest of the race and still make the next round. Meanwhile, the remaining 11 have to sweat the entire race at the 2.66-mile track – that is, unless they win Kansas.

Sweet, sweet Kansas. Not a track you think about often, even though it’s had a second date on the Sprint Cup schedule since 2011. It’s just not a flashy track, one of the 1.5-mile tri-ovals that puts on a good show from time to time, but doesn’t tend to be a must-see race for fans who don’t live in the area. And yet you can bet NASCAR’s elite has been studying the speedway quite a bit the last few weeks – maybe even months – in preparation.

Whoa, man, slow down. Is Jeff Gordon actually about to win a damn race this season?

Well, maybe? Certainly Gordon is one of the most decorated drivers in the 14-year history of Cup racing at Kansas. Three wins in that span is a solid number and eclipses everyone except Jimmie Johnson, who isn’t even in the Chase anymore. Then again, there remains the nagging notion that Gordon is indeed winless in this, his final season. But unlike some tracks on the circuit where Gordon’s stats look impressive but skew better toward the beginning and middle parts of his career, Gordon actually has a win at Kansas recently, taking the checkered flag in the May race last year. Even still, 11 top fives in 19 races is a good, good showing. Kansas is one of the few tracks left on the schedule where one can say, “Hey, Gordon has a shot,” and mean it.

Otherwise, yeah, it’ll probably be Matt Kenseth. His five wins in 2015 lead the series, plus you know he absolutely needs it given his dismal showing at Charlotte where pretty much everything that could go wrong did indeed go wrong for the No. 20 bunch. He’s not a dude you wanna cross this weekend.

Give a shoutout to Carl Edwards, too; even though he’s never won a race at Kansas, his 10.8 average finish there ranks among the best, and Joe Gibbs Racing is sure to be a powerhouse at the track this weekend given Kenseth’s need for the organization to not screw up royally. Tough to imagine him not in the next round anyway.

As for a darkhorse, Martin Truex Jr. is not always a name to remember at Kansas, but when he’s dialed in there, he’s really good, with four top fives and five top 10s.