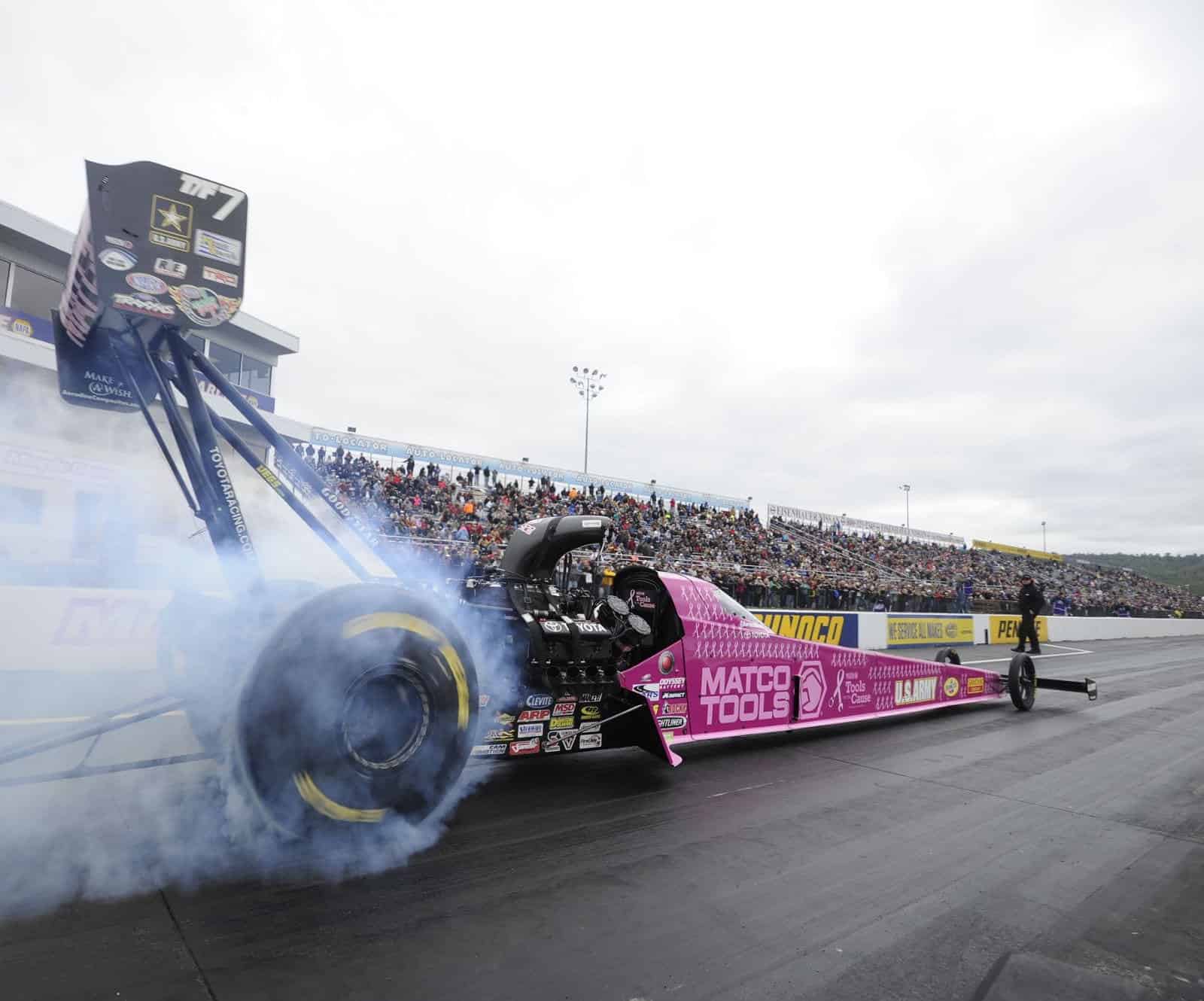 Here we are, already halfway through the Countdown to the Championship, with three races in the books and three more left to complete the 2015 season. Where do things stand and who looks like they might be tough to beat with just a few events remaining?

In Top Fuel, that’s a pretty easy question, as it’s been all the Antron Brown show. He’s won all three events so far and pulled out to a 94-point lead over teammate and defending champion Tony Schumacher. Schumacher has not given up by any sense of the imagination, and it’s not impossible. If Brown can pull out by 94 points in three races, Schumacher could make up that deficit. Of course, Brown had to win three races to get that lead, so Schumacher might want to plan to do the same.

Funny Car has been an interesting category. It was Del Worsham, quietly flying under the radar all season, who got off to a quick start, winning the first two races. Meanwhile, Fast Jack Beckman, who looked like the man to beat, got off to a rotten start. Beckman conjectured he’d need to win the race and set a national record to get back in the fight. Then he went out and did just that and as he thought, he is indeed back in this fight, just 16 points behind Worsham. The man how has been riding that “Prock Rocket” all season isn’t giving up that easy. This could be a battle if Worsham can bring the fight back to him.

Defending Pro Stock champion Erica Enders raced her way out of the gate with a win at Charlotte and a final round appearance at St. Louis, drawing out a good lead, but stumbled a bit with mechanical woes in Reading. Meanwhile, second-place driver, and from the looks of it all season her main competition, Greg Anderson got off to a slow start but capitalized by making it to the finals in Reading, closing the gap to 72 points. Anderson has some ground to make up, but he’s been stout for most of the year and doesn’t count himself out either.

“We dug ourselves into a hole the first two races of the Countdown, so we need to dig ourselves out,” said Anderson. “We got back in the game in Reading, and now we have to do really well in Dallas if we want to stay in this thing. We have no room to make any mistakes.”

Eddie Krawiec carried the Harley Davidson torch through the regular season, but in the playoffs it has been Andrew Hines running for the finish line. Either way, it does look like it’s shaping up to be another Harley Davidson kind of year, with Hines and Krawiec topping the standings. Hector Arana Jr. is the next closest guy, and he’s 101 markers back.

2009 – Won sixth consecutive Top Fuel championship, the only driver to ever do so; won eighth U.S. Nationals.

2008 – Fifth consecutive Top Fuel world championship; tied Greg Anderson for most wins in a season with 15; appeared 18 times in final rounds out of 24 races; swept the Western Swing; nine times No. 1 qualifier.

1996 – Ran his first NHRA national event and went to the final round.

Some things most people don’t know about Tony: While Tony has never actually been in the Army, his long-time sponsor has sent him out on a wide variety of training activities, something that also helps him relate to the soldiers he represents. It’s apparently had an effect because when asked what sort of things he’d like to try, the answer is probably something his sponsor could arrange, like flying in a squirrel suit. When he’s not racing, one of Tony’s favorite things to do is ride his Harley-Davidson motorcycle.

Crazy but in a very cool kind of way, Schumacher talks about one of the craziest things he’s ever seen at the racetrack.

Points by which second-place Beckman trails first-place Worsham in Funny Car, the closest battle in the Pro categories and absolutely one to watch at Dallas this weekend.

NHRA is back in action with the fourth race of the six-race Countdown to the Championship this weekend, the AAA Texas NHRA FallNationals. Tune in on Sunday night.