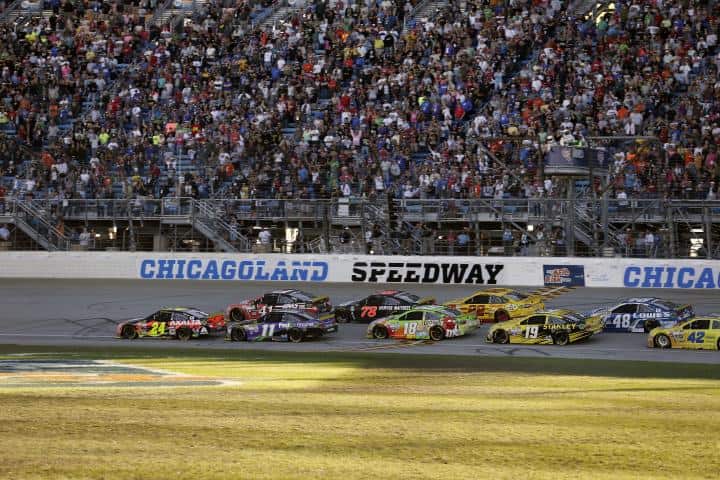 Jeff Gordon drove a masterful race Sunday in Chicagoland before fading to 14th in the final few laps. However, along the way the Hoosier created a massive controversy as he appeared to jump a lap 144 restart, shooting to the front as former leader Kyle Busch pleaded with NASCAR for a penalty. Speeds from Sportvision’s 3D pointer system appeared to show Gordon getting a head start just before Busch pressed down on the accelerator pedal.

It isn’t the first time NASCAR’s restart policies have been tested, and when Gordon wasn’t penalized, it served as one of many instances certain drivers believe existing policies haven’t been enforced. This particular instance also tugged at the frustration of many fans angry their sport isn’t getting policed fairly across the board.

Many have urged NASCAR to crack the whip in recent weeks, throwing penalties out for bad behavior but given the excitement of restarts this season, should they? Frontstretch assembled two of our writers to take a look at both sides of the issue. Yes, that’s right; Two-Headed Monster actually includes two heads this week.

Should NASCAR Increase Its Enforcement of Restart Policies?

Opinion One: Yes. Obviously. The general consensus within the Cup Series garage is that NASCAR should officiate restarts with an iron fist. Take a look at these quotes from Chase media day in Chicago a week ago….

“I’m not comfortable one bit with how they’re officiating it.” – Kyle Busch

“If somebody deliberately jumps, you’ve got to call it. And it’s got to be a black and white decision.” – Jeff Gordon

“All you’ve got to do is call somebody on ’em once and that’ll fix the problem.” – Clint Bowyer

These drivers have good reason to want policing on restarts: they’re running for a championship. In an era where clean air trumps tires 99.9% of the time, getting ahead, even if just a little bit, can affect the outcome of a race and, in turn, a championship.

Forget clean air for just a second. It’s hard to pass, period. These are the best drivers in the world, equipped to utilize any advantage so it’s pretty clear-cut why they’d want an equal restart. Jumping, even by a tenth of a second gives the transgressor a tremendous advantage. Just ask owner Roger Penske, outraged after it appeared Matt Kenseth jumped the final restart at Richmond a couple of weeks ago. While Kenseth had indeed dominated the race, Penske thought his driver Joey Logano could overtake the No. 20 in the final sprint if given a “fair shot.”

This case isn’t an issue of NASCAR barging in, making changes that make no sense or go against popular opinion (although that’s typically been its modus operandi). In this case, the drivers actually want the sport to get involved!

Why they aren’t is puzzling to me. Garage officials basically police everything else; they won’t let teams add jet fuel to their tanks, intentionally spin out, or flare side skirts without serious consequences. So why not police this rule? The most blatant disobedience of it is so obvious even a casual NASCAR fan could catch the bad guy.

Officials may be listening to the drivers, finally but that comes only after weeks of complaining. For Chicagoland, they introduced a dedicated official and a camera focusing on the restart zone, add-ons which were immediately thrown into the fray following a maybe-not-so-kosher restart by Gordon on lap 144.

NASCAR, aided by their new tools, ultimately ruled that Gordon was OK in going when he did, but it was “close.” Speeds from NBC’s Sportvision tools, data the sport doesn’t have access to in the booth may have proved otherwise.

I understand NASCAR’s reluctance to go Orwell on restarts. They’re under constant scrutiny lately for allegedly fixing races by throwing debris cautions; the last thing they want is another instance where their call becomes the defining moment of the race. Drivers are ultimately at fault for not following the rules laid out in front of them.

But when the drivers themselves ask for NASCAR’s involvement, there’s an obvious problem. If they feel abuse of the rule is getting that far out of hand, you should provide them some clear-cut help as the sanctioning body that’s supposed to be in control of the race.

When the official statement is “there is a right and wrong way to do it and it’s hard sometimes for us to figure out that line,” which NASCAR’s Mike Helton said prior to the Chicagoland race, maybe officials need to actually figure out where the line is and then enforce it. It’s a rare case where staying out of it is only causing more confusion… and frustration. – Sean Fesko

Opinion Two: Restart Controversy is All NASCAR Has. Why Remove It?

Drivers and fans might be upset about NASCAR’s restart enforcement in recent weeks, but at least they’re talking about it.

Yes, the system has shown flaws over the course of the summer. Whether it be Kenseth pushing it before entering the restart zone at Richmond or Gordon jumping before the leader just last week at Chicagoland, nearly every race has created controversy.

NASCAR restart enforcement can be likened to throwing of flags by NFL referees or handing out of yellow and red cards by soccer refs. It’s an inexact science, based on instinct and gut feeling. The calls typically aren’t always the most consistent – sometime officials can seem downright biased – but they always keep fans buzzing because they offer something no other aspect of the game can: a human element.

Yes, NASCAR could eliminate these issues altogether. The sanctioning body could do away with restart zones and letting the leader determine when to go. Officials could enforce their policies more harshly, even resorting to having the flagman restart the race every time. But honestly, what fun would that be?

In the old days, when flagmen used to bring the race back to action, passing on restarts was rare. Sure, some of that can be attributed to the fact that the leaders restarted single-file, lapped cars down to their inside. But the fact is that when these professionals all know exactly when to go, it’s difficult for any of them to gain any sort of advantage.

Restarts have served as the primary time to pass throughout a lackluster 2015 season. Drivers have managed to keep lead changes up solely because of the bold moves completed in the first 2-3 laps of most runs.

Beyond restarts, races have have transformed into spread out, follow-the-leader boredom that’s left both hardcore and casual fans reaching for the remote or “watching” through closed eyelids. I can’t blame them, either. Even the media have had difficulties finding stories after some of the snoozers throughout this tumultuous season.

Drivers are going to keep complaining about restarts, and in doing so will encourage fans to gripe as well. However, that’s no reason to completely do away with the current policy. The ultimate truth is that the rule, while loose, is the same for every driver in the field. They all know exactly what could happen whenever the green flag flies and can plan accordingly. NASCAR has already made the cars too easy to drive on long green-flag runs. Do we really expect them to make the only challenging aspect of the race simpler, too?

If NASCAR wants to strip away one of the last human elements of their races, doing away with three-quarters of the race’s passing in the process, then they can try to enforce their restart policies on a tighter basis. However, if they want to deliver a decent product to fans, and aren’t willing to introduce the new rules package early, then I’m afraid the occasional restart complaint is something fans and drivers are just going to have to deal with for better action on-track. Otherwise, fewer people may be angry, but fewer people may also be watching. – Aaron Bearden

Let the starter start and restart the race. The drivers don’t go until the green flag waves. It will be obvious if a driver starts early. Makes too much sense for Brian. No controversy.

go to the dirt track style restart where the leader is alone in row 1, then everyone else is double file. Essentially, you get both of what you discussed- leader leads and still have double file restart for “passing and excitement”.

People, people, try for a moment to think like a member of the sanctioning body. NASCAR needs the confusing double file restart rules because it gives them another fluid rule to either enforce or not (after a late fake caution) depending on how they are attempting to manipulate the eventual outcome of the race. I mean, what if , gasp, there is a driver that doesn’t fit this week’s narrative leading coming out of turn 4!

Some guy who likes racing.

Who really gives a good shit ? This is NA$CAR we are talking about, the WWE of auto racing. If you want to see actual race car drivers and actual racing go to your local dirt track or county fairgrounds and enjoy. Some of the best racing I have ever seen was at a three eighths mile dirt track at The Dubuque county fairground in Dubuque, Iowa and at Yakima Speedway in Yakima, Wa. The Yakima Speedway was/is i believe coccrete and it was some kick ass racing, a lot of fun! Nascrap is an absolute waste of time and when it is all said and done I am confident that that rascal B. France already knew who was going to win before the green even flew.