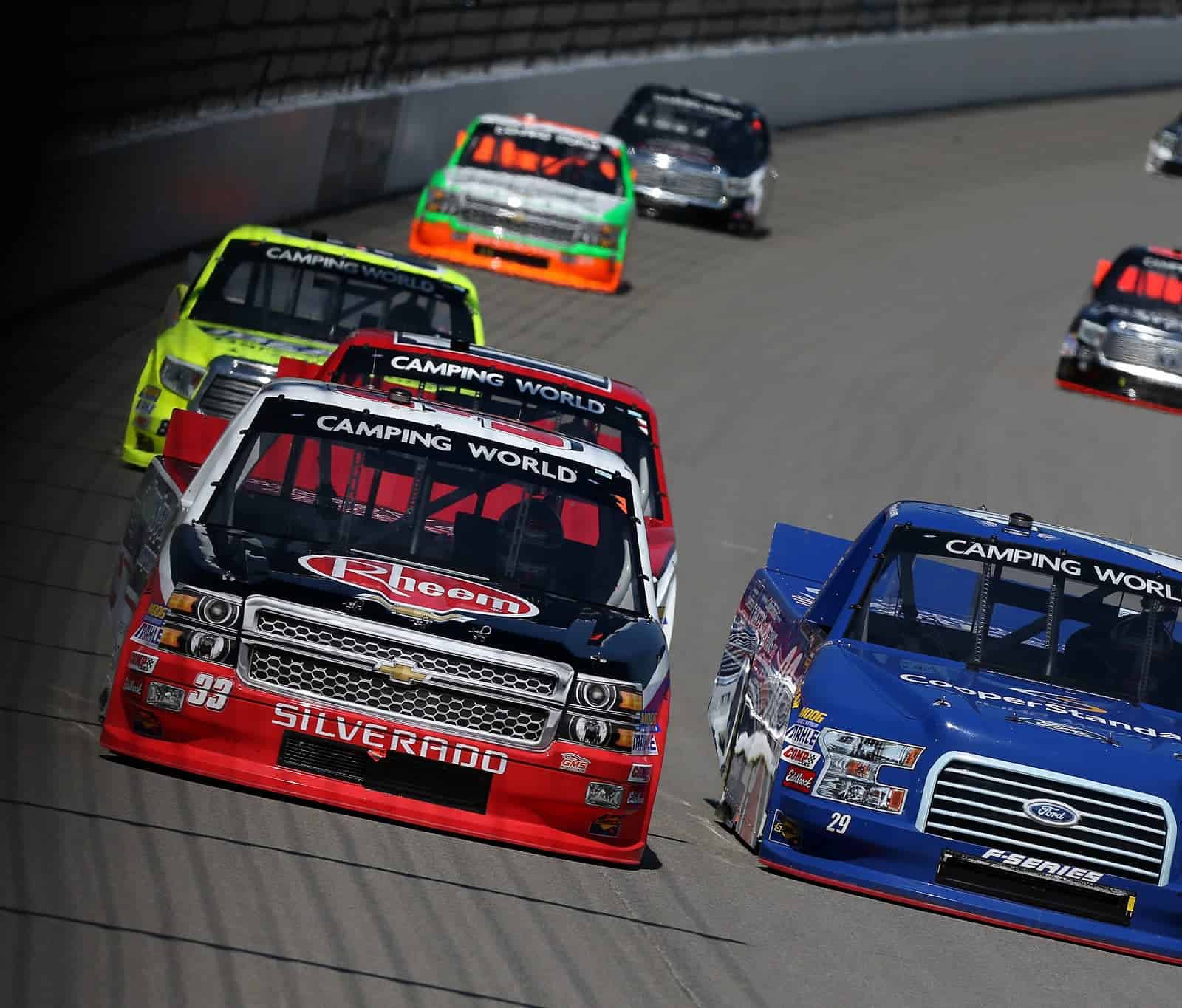 The Camping World Truck Series rolls into New Hampshire Motor Speedway this weekend and celebrates a milestone. The UNOH 175 marks the 500th race since the series was first dreamed up in 1994. Born from an idea and a “we’ll give it a try” attitude, the Truck Series has turned into more than anyone could have imagined 21 years ago.

After a four-race demonstration series was held at Mesa Marin Raceway in Bakersfield, Calif., a 20-race schedule was released for the first ever Truck Series season. The inaugural race was held Feb. 5, 1995 at Phoenix International Raceway, and Mike Skinner, behind the wheel of the GM Goodwrench Service Chevrolet for Richard Childress Racing, beat out Terry Labonte to claim his first of 28 career victories.

Milestones in the Truck Series

Through the years, the Truck Series has grown tremendously from its roots. Here’s a look at just a few of the many special moments that have happened throughout the last 499 starts. The list is by no means all-inclusive and touches on just a few of the important moments since 1995.

In its inaugural year, the Truck Series lived up to the current day expectations of tight racing and close finishes. The 1995 Total Petroleum 200 saw Butch Miller, driving the No. 98 Raybestos Ford edged Skinner by a slim 0.0001 seconds in what can only be called a photo finish. As it turned out the victory was the only one for Miller in 145 series starts.

First Rookie to Win a Race

On March 16, 1997, the late Kenny Irwin Jr. became the first Rookie of the Year contender to win in the Truck Series. Irwin scored the victory in the Florida Dodge Dealers 400k in only his eighth career start. Sadly the young driver’s life was cut short when he was the victim of a stuck throttle during a practice session at NHMS in 2000, just two months after Adam Petty was killed in nearly the exact same spot on the track.

On Nov. 8, 1998, Ron Hornaday Jr. became the first driver in the Truck Series to score a second championship. With six wins in 27 starts, Hornaday finished second to Jack Sprague in the final race of the season and edged Sprague by just three points in the standings that year. Sprague went on to score his second championship the following season, but since then Hornaday has tacked on a couple trophies and holds the current series record of four championships.

Three Drivers Duke it Out for Championship

Entering the final race of the 1999 season at California Speedway, three drivers – Greg Biffle, Sprague and Dennis Setzer – found themselves separated by just 25 points when the green flag flew. But it was Sprague who came out on top after winning the NAPA Auto Parts 200 and his second career championship – he edged Biffle by just eight points.

On July 8, 2000, Kurt Busch became the first rookie driver to win back-to-back races in the Truck Series. Behind the wheel of the No. 99 Ford for Roush Racing, Busch visited Victory Lane for his first career victory at the Milwaukee Mile and followed it up with another win at NHMS. Later, Busch joined the Sprint Cup Series behind the wheel for Roush Racing where he stayed until leaving the team for Penske Racing at the end of the 2005 season.

In February 2003, NASCAR and Toyota joined together for a special announcement. Starting with the 2004 season, Toyota would join the Truck Series with the Tundra thanks to its assembly line in Indiana. It was July 31, 2004, when Travis Kvapil took Toyota to Victory Lane for the first time at Michigan International Speedway. Since joining the series seven years ago, Toyota has racked up over 100 wins – including nine this season – and seven manufacturers’ championships.

In just a few short months after the Sprint Cup and Xfinity series began using double-file restarts, the Truck Series began using them in the 2010 season. Having used the previous standard of restarting with lap-down trucks inside the lead lap drivers since the series began in 1995, the slower vehicles often got in the way and likely affected the outcome of at least a few races. Since the 2010 season began with only lead-lap drivers up front for each restart, fans have been treated to several exciting finishes that would most likely have turned out differently had there been lap-down vehicles in the way.

Heading into the 2014 season, there had been a few drivers who had won more than one championship, but none of those had been able to take home the big trophy two years in a row. Enter Matt Crafton, fresh off of his first championship after 13 years racing full-time in Truck Series competition. With two wins, 13 top fives, 17 top 10s and an average finish of seventh in 22 races, the driver of the No. 88 Toyota scored his second consecutive championship by 21 points over Ryan Blaney.

“It’s so cool to see the NASCAR Camping World Truck Series reach its 500th race and it’s really an honor to be a part of it. Everyone at NTS Motorsports and California Clean Power are extremely excited about this special 1995 throwback paint scheme we’re running this weekend,” Hemric said in a team release.

“Rick Carelli been a huge part of everything that we have accomplished this season, so it’s very special to be running his colors from the inaugural Truck Series race. Rick has so much experience in this sport, both as a driver and in managing successful teams, and he’s been a tremendous help in teaching me things both on and off the track. He’s my eyes on the spotter’s stand and he keeps everything pointed in the right direction back at the shop. I appreciate what he does for me every single weekend, and this milestone race seemed like the perfect opportunity for our team and our sponsor to acknowledge that.”

Too bad nobody will watch the truck race this weekend. We already know the winner, Kyle Busch needs another trophy. I wonder how gratified Nolan Ryan would have been after throwing a shutout or a no hitter against a double A team? Just ridiculous.

Fred, are you going to the “Celebration”? I hear they’re having it in a phone booth in Daytona. There are still tickets available!

I’m getting a JGR jacket and hat so I can celebrate his Owners Point Championship….isn’t that the point of the Xfinity title, since a sixth place finish is normally the best for the circuit regulators. Hell, I can even wear them for the truck championship…dual purpose.

you guys can find the channel the trucks are on?