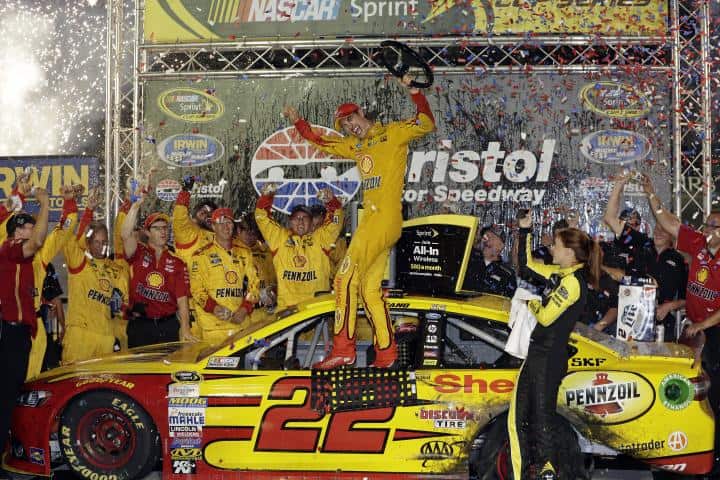 It’s fair to say that Joey Logano is a fan of Bristol. In the night race one year ago, Logano held off a hard changing teammate, Brad Keselowski, to win his first race at the high-banked half-mile. Saturday night was very similar. The 500-lap, 250-mile race came down to a 50-lap shootout between Logano and Kevin Harvick in which Logano came out on top, leading 176 laps and scoring the win in the Irwin Tools Night Race.

Logano has now won two of the past three races at Bristol, and is the first driver to go back-to-back in the annual summer night race since Kyle Busch in 2009 and 2010. This is the Connecticut driver’s third victory of the season, 11th of his career, and second in the past three NSCS races.

Harvick’s second-place finish was his eighth second-place finish since his most previous victory, which came at Phoenix in March. It is his 17th top-five finish this season, a single-season career-best for the 2014 champion, and his 250th career top-10 finish.

Bowyer as well as his teammate David Ragan were having their best race of the season. Just three days after the announcement that Michael Waltrip Racing will not field a full-time car in 2016, Ragan and Bowyer were running in the top five when the No. 55 Aaron’s Toyota made contact with Johnson, forcing Ragan across the front bumper of the No. 15 and spinning out into the inside wall. Ragan would finish the race in 40th.

Keselowski stayed out on the eighth and final caution of the race to restart in the lead with 63 laps to go. Keselowski held on to finish sixth, followed by Carl Edwards in seventh and Busch in eighth. Both Edwards and Busch had tire issues that shuffled them to the back of the field, eliminating their chances at victory. Busch led a race-high 192 laps, while Edwards led for 74 circuits.

After receiving two free passes, one wave-around and hitting the wall, Dale Earnhardt Jr. ended his night in ninth, followed by Chase bubble driver Ryan Newman in 10th. Jamie McMurray, Justin Allgaier and Austin Dillon were the final three drivers on the lead lap. Bowyer, Newman and McMurray were three of the five winless drivers who came into the race in Chase positions. The other two did not fare so well. Jeff Gordon, running a throwback rainbow paint scheme, was running inside the top five when he came down pit road for a loose wheel with 93 to go. After having to pit for another loose wheel in the final laps of the race, Gordon finished 20th, four laps down. Paul Menard went a lap down in the first 70 laps of the race and could never recover from it, finishing 24th, four laps down. All five drivers leave Bristol still holding a Chase spot.

Kyle Larson and Matt Kenseth both had the potential of being contenders when the night started. Larson’s multiple tire issues relegated him to a 41st-place finish, while Kenseth’s engine failure left him with a 42nd-place finish.

The No. 24 Rainbow throwback paint scheme is only a preview of what we will see in two weeks, as the NSCS will return to the track at Darlington Raceway for the return of the Southern 500 to its original Labor Day date. The race can be seen on Sunday, September 6th at 7:00 p.m. ET on NBC.

Glad Joey was able to hold off Harvick, and was even happier that he finally beat the Gibbs cars. As much as I can’t stand Gibbs himself, as he strikes me as being a phoney and a hypocrite, I did feel sorry for Kenseth. With him safely in the farce, I mean the chase, did Gibbs run an experimental motor in Kenseth’s car?

Yeah, I always found his deeply religious facade hard to believe given he was a football coach. Dear Jesus, help us pound our opponents black and blue for no reason other than the momentary entertainment of others. I’m thinking that is not exactly what the truly religious believe.

So, all football coaches are not able to have and live a Christian life?

You are probably right. It just always struck me as incongruous, like when boxers thank God after knocking someone senseless.

By the way, did anyone find out what happened to “Bugs”, the furry little varmint who shut down the morning truck practice and gave all those officials the (literal) runaround? Talk about the story of the week!

No known capture and no known rabbit stew served by campers overnight but here’s the video of the rabbit outsmarting NASCAR officials….silly bastards, didn’t they know it was Duck season!

Harvick worried me, more than he did Joey. I was expecting the chrome horn at the end of the race but, he couldn’t get to him to do it, even right out admitted it after the race. Congrats to Joey and the Penske 22 team! Loving the winless streak by Chevy… Been a great summer on that note, despite the poor racing on the track, I have enjoyed the results!

Whether one likes Joe Gibbs’ demeanor or not the man has accomplished something no one else in the Professional sports world has done. Not only was he a football coach but one that won three NFL Superbowls. Now add to that three NASCAR Winston Cup championships as a owner.

And he hired Kyle Busch, knowing that he would have a profound effect on him and teach him the error of his ways.

JER these curmudgeons around here are never going to give Gibbs credit for anything as long as that evil Kyle Busch is driving one of his cars and those cars are Toyotas but, yes, I agree, he owns some incredible accomplishments in the NFL and NASCAR.