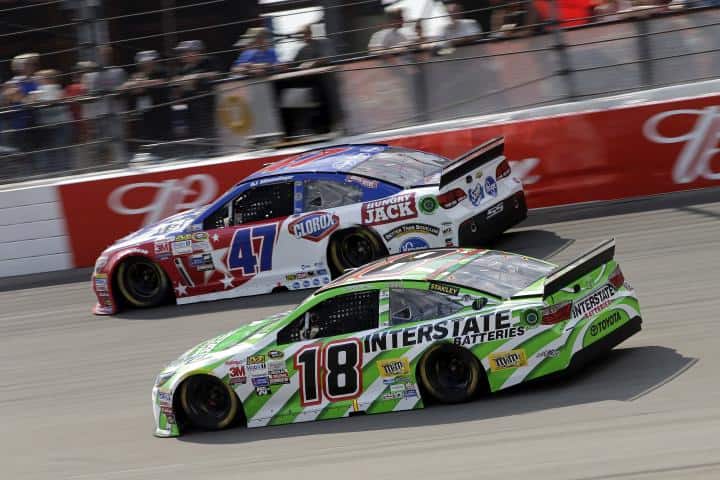 Now that we are down to just three races remaining in NASCAR’s “regular season,” the pressure is officially on for drivers who don’t have a coveted win to go for it at all costs. And there may be no better place for the first of these pressure-cooker races to happen than at Bristol on Saturday night. It means drivers will either gamble on fuel to try for a win, crew chiefs may try and devise a little different pit strategy and if comes down to the last couple of laps and if a driver without a win and not in the Chase needs to do a bump and run to get that win, then you can pretty much count on it happening.

Well, now it’s Matt Kenseth’s turn to carry the Joe Gibbs Racing mantel as he has won two of the last three races. OK, so you say one of those was due to some good strategy and his ability to save fuel. But this one was pretty cut and dried. He simply had the fastest car all day and it was the kind of day where everyone else was just racing for second. For the numbers, Kenseth, who started on the pole, led 146 laps and save for some swaps on pit stops, or early on when Austin Dillon used a different pit strategy, it was pretty much all his day. Kenseth continued to lead what has been a strong surge by the Gibbs cars for the last month now as Gibbs had three of the top-six finishers and four of the top 11. Whatever those teams were missing early in the season, they’ve got it figured out.

And speaking of Gibbs drivers, none may have better instincts than Kyle Busch. After a practice accident forced him to start in the back of the field Sunday, Busch made sure he started way, way, way back there. Convinced there was going to be an accident on the first lap, Busch let the rest of the field get away on the start by about three or four seconds, and he proved prophetic as David Ragan spun on the first lap. While the field avoided Ragan, with a few cars narrowly missing him, Busch was nowhere near the accident scene, slowly driving past Ragan well after the rest of the field had gone by.

You have to wonder if Kevin Harvick gets tired of finishing second. He was the runner-up once again on Sunday, making it the ninth time he has finished second this season. Even though he does have two wins this year, being so close to several other wins this year (and those second places don’t include a near fuel-mileage win at Watkins Glen last week) could be a bit frustrating for some teams.

But don’t expect Harvick or crew chief Rodney Childers to panic, or do anything close to it. Harvick has a series leading 16 top-five finishes. So, I would say, nothing wrong here, move along. In fact, there is a lot right with this team, still one of the favorites to win the Chase.

If you’re thinking of who else just might be in line for a Mr. Consistency award that would be Martin Truex Jr. He has just the one win this season, but he is third in top-10 finishes with 16 this season. Truex, who finished third, proved how strong his car was on Sunday right from the get go, starting 22nd and working his way into the top 10 in quick order and spent some time, along with several others, running second and trying to catch Kenseth.

Well, Austin Dillon has been ice cold for most of the season, so to take a jump up here is a step in the right direction for the No. 3 team. Dillon had his best race of the season Sunday, leading 19 laps and finishing fourth for his first top-five finish of the season and career-best Cup finish. Many thought Dillon would take a bigger step forward in his second season, but it just hasn’t been the kind of season that he or his team have hoped for. Maybe Sunday shows a glimmer of hope for them. And fans of the No. 3 had to like seeing it run out front for at least a little while. Dillon will need to end a race as the leader to make the Chase though, as he is 87 points behind Clint Bowyer, the final Chase place holder at the moment.

The other second year driver who many thought was ready for a breakout season but hasn’t done anything close to that is Kyle Larson. The No. 42 car looked strong early Sunday, but Larson eventually had to settle for a 13th-place finish. Like Dillon, he has just one top-five finish this season. It’s true that missing the Martinsville race after passing out at an event the day before cost him some important points, but even if he would have finished in the top 10 there, he would still be needing a win in these last three races to make the Chase.

Bowyer literally had to spend some time parked in the pits during the race Sunday. And that is really bad news for the No. 15 team as Bowyer does not have a win and now sits in the final Chase qualifying spot. Bowyer was running 11th when he spun on lap 126 Sunday and had been inside the top 10, and even in the top five at times, but the accident caused him to settle for a 41st-place finish. Bowyer does have a 23-point lead over Aric Almirola and a 26-point lead over Kasey Kahne. And just as important, Bowyer is now 32 points behind Jeff Gordon, the next driver who would qualify on points. Bowyer simply can’t afford another one of these kind of finishes in the next three weeks.

A recent run of tough luck continued for Jimmie Johnson. He ended up in 39th Sunday after having a tire go down early in the race, and then missing his pit stall later on. It’s the kind of thing where if you just started watching these races and then someone told you Johnson had won four races this year, you would have a hard time believing it. Now, the No. 48 team understands how to run the Chase probably better than anyone, but you know everyone on that team can’t be happy with these kind of days.