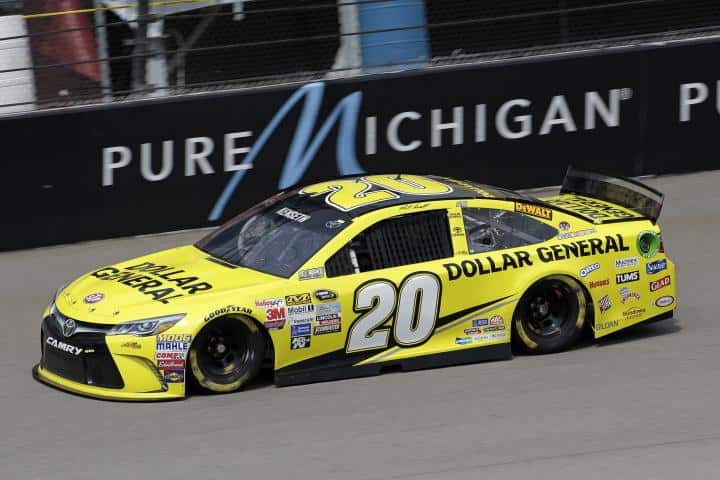 Matt Kenseth was nearly untouchable on a hot Sunday at Michigan International Speedway.

Leading 146 laps from pole position in the Pure Michigan 400, Kenseth brought himself and Joe Gibbs Racing another victory, their sixth in eight races and ninth overall in 2015.

“I don’t know if I’ve ever had [a faster racecar] and not messed it up,” said Kenseth in Victory Lane for the third time in 2015. “These guys gave me a great car. Its easy to take things for granted. I have to thank the Lord for putting me here. This is just an unbelievable opportunity.

“We’ve had a great couple months,” Kenseth said of JGR’s stride. “We definitely have some momentum built. the guys gave us rockets today. We’re just going to work hard to keep it rolling.”

The win didn’t come without a dose of controversy, as the No. 20 Toyota appeared to have a side skirt “flared” on the right side – a practice deemed illegal by NASCAR for 2015.

However, as crew chief Jason Ratcliff explained, it was a mistake under a green-flag pit stop that bent the side skirt on the car.

“It was a green-flag stop, jackman got underneath the jack post and Matt rolled forward a little bit,” Ratcliff said in Victory Lane. “It slowed the stop down quite a bit. I would like to sit here and say that was by design, but that’s what happened. The jack slid under it and we had to reset and obviously, bent the side skirt.”

Kenseth was rolling to victory, drama-free, until a late-race spin at Jimmie Johnson brought out the day’s eighth yellow. Kenseth received a push from teammate Denny Hamlin on the ensuing restart, giving him the advantage over Kevin Harvick to drive away with the win.

“Denny did a spectacular job pushing me,” Kenseth said of the last restart. “From the restart zone to, about, turn 2 was a superspeedway race and it was whoever got locked up.”

The restart that grabbed Kenseth’s attention came on lap 141, when side-by-side pressure from Austin Dillon nearly led to the Wisconsin native conceding the lead.

“Honestly, the toughest one was with the [No.] 3,” Kenseth continued. “We went back and forth a few times and made some contact up there. It was hard to get away from him.

“My car took about five laps to get going. Once I got going, it was pretty stout.”

Dillon had a career day in Michigan despite his fourth-place qualifying effort being stripped due to an engine change following Saturday’s final practice. Dillon saved fuel over the race’s opening stint, restarting with the lead on lap 24 after staying out under a lap 20 competition yellow and holding onto the top spot for 19 laps.

“Slugger (Labbe, crew chief) made a good call in the beginning,” Dillon said. “We kind of had that plan to ride around and save fuel and it worked out for us.

“I had fun. We gained a lot of spots. We started 43rd and got to fourth – where we qualified. Just overcame a lot today. Proud of my guys.”

Not everyone is rolling with optimism, however.

Clint Bowyer crashed down the backstretch shortly following a lap 125 restart, sending the Chase hopeful to the garage and an eventual 41st-place finish, 36 laps down. Bowyer now sits 23 points above the crucial Chase cutoff with three races left in the regular season.

Johnson ran into multiple issues on the track he won last year. A flat right-rear tire early took the No. 48 off strategy. The six-time champion then missed his pit box on lap 116 and ended up with a 39th-place finish following a late spin.

Hendrick Motorsports teammates Kasey Kahne and Jeff Gordon were rarely seen battling in the top 10 on Sunday, struggling as the organization failed to build from a tough day at Indianapolis – the last race with the high-drag package.

Rounding out the top five was Martin Truex Jr. in third and Denny Hamlin in fifth, who said a little speed held him back to fight for the win.

“We didn’t quite have the speed the [No.] 20 had, really all weekend,” Hamlin said. “A top five is good with this aero package, twice in a row we got a top five. Hopefully there is light at the end of the tunnel because this was a tough one to pass on. Overall, it was good. It was a fun race.”

The drivers on the Chase bubble were also on the bubble of the top 10 as Paul Menard, Ryan Newman and Aric Almirola all had solid efforts – finishing 12th, eighth and 14th, respectively.

Carl Edwards had apparent battery issues under caution, which, by NASCAR’s rule of having to stay under caution car speed, dropped the No. 19 from restarting from second to 11t. Edwards would rebound for a sixth-place result.

“We had a little bit of restart trouble,” Edwards stated. “With Austin [Dillon], that was really frustrating because with this package, the restarts are so important.”