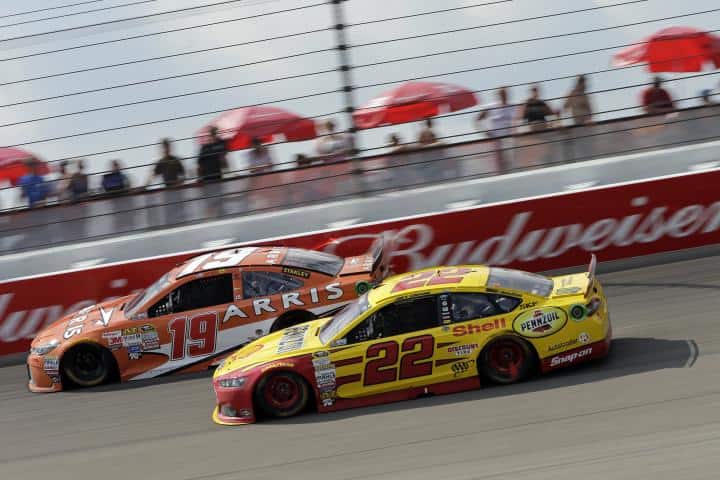 Edwards, who started the 400-mile race in third, found himself in the lead heading to a restart on lap 125 of Sunday’s Pure Michigan 400. Edwards appeared to spin his tires as Richard Childress Racing driver Austin Dillon sped his No. 3 Chevrolet ahead of Edwards’s Toyota, beating him to the start-finish line and taking the lead briefly before being passed by Kenseth coming out of turn 2.

Edwards would suffer an electrical issue on another late yellow, stalling briefly on-track and losing multiple positions as a result before driving back up to a sixth-place finish.

The Missouri native was critical of the restart following Sunday’s race, claiming that Dillon jumped the start.

“Austin took off,” said Edwards. “I don’t know exactly why [NASCAR] didn’t call that. The restarts are so important right now, especially with this package. It’s very difficult to pass.”

Asked if he spun his tires, Edwards became animated in his response.

“No, I never went,” claimed Edwards. “I never went on that restart. It’s like I told Dave Burns, ARRIS outfitted the whole place. They’ve got hi-def replays up there, I know it.

“Pretty frustrating. I thought I got to control the start, and Austin [Dillon] just took off. He actually started going a little bit before the restart area. I let him pull up there, and then he just drove away. “

The Missouri native has shown speed in recent weeks, but issues such as Sunday’s restart have kept him out of victory lane since his May 24 victory in the Coca-Cola 600. In the meantime, Edwards’s JGR teammates have gone on to win six races, including five of the last six events.

Edwards, typically calm and composed, made little effort to hide his frustration with NASCAR’s penalty procedure for restarts given their importance this season.

“In a situation like that, I really would hope that [NASCAR] would have done a lot better job, and looked at it harder, just because restarts are so important,” said Edwards. “You can’t pass very well, so that was a big deal.

“NASCAR is supposed to police the events. I’ve been black-flagged for restarts, and I got black-flagged for doing just that. I’ve gotta give it to Austin. I mean, I can’t be mad at him. He did something and got away with it.

“Last week, I started on the front row and Brad went before the restart zone every time,” Edwards continued. “They warned him over and over.”

“Shame on me, I guess, for not cheating more,” Edwards joked. “I’m not trying to whine, I just want to know how the rules are going to be enforced. Restarts are so important with a package like this.”