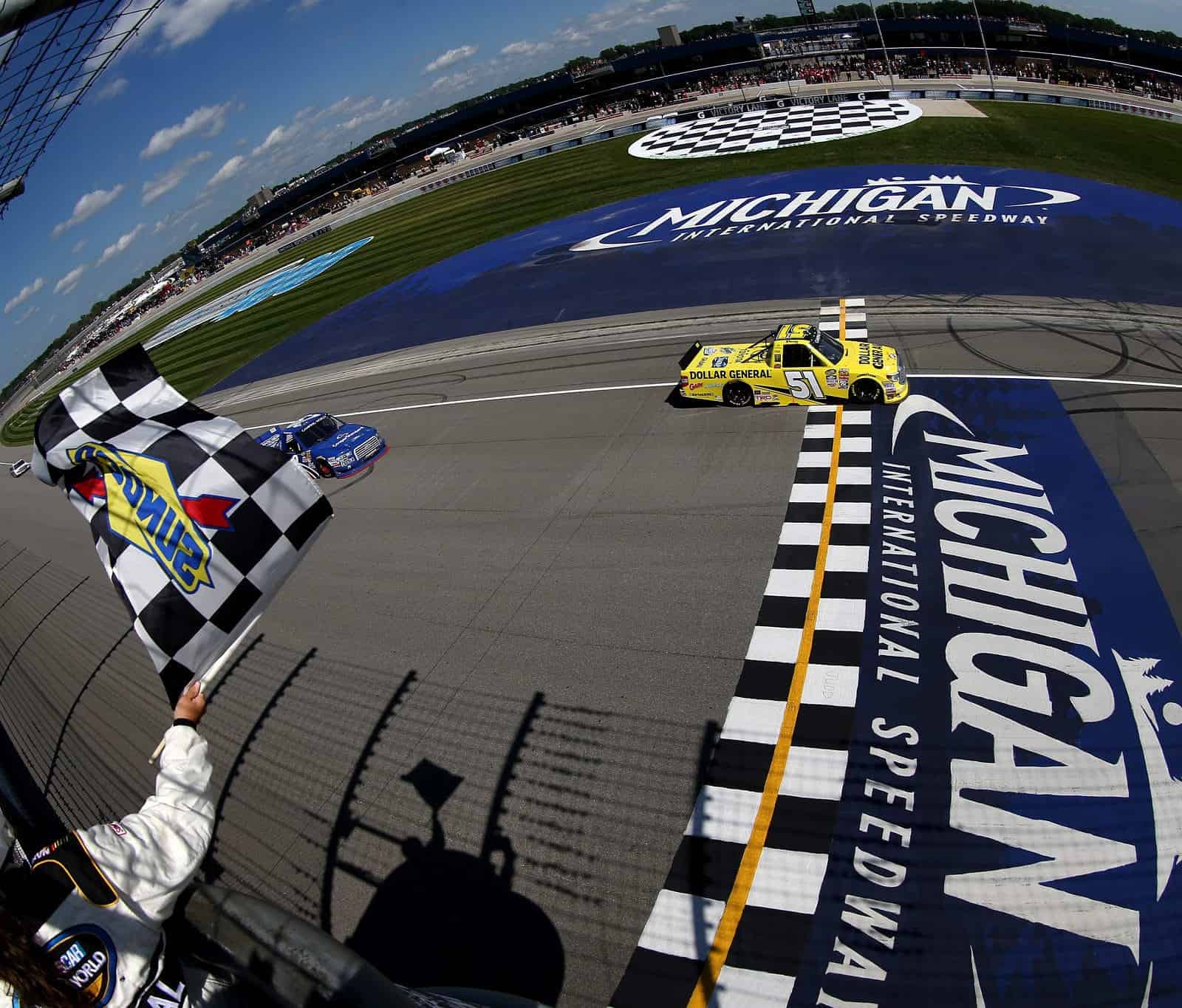 Kyle Busch’s checklist is getting shorter and shorter.

Checking off Michigan International Speedway on the win list in the Camping World Truck Series, Busch overcame a speeding penalty on lap 27 to win the Careers for Veterans 200 – his second series win of 2015 and 44th of his career.

“First win for me, first win for KBM here,” said Busch in Victory Lane. “It’s really fun to race my trucks, I really enjoy it. I love to race with those guys up there. [Erik] Jones and [Ryan] Blaney and [Austin] Dillon – it was pretty hectic on how that was all going to shape up and play out.

“It’s cool to finally get that monkey off my back here in the Truck series and notch another racetrack where I’ve won in all three divisions here at Michigan. I sure wish there wasn’t that many cautions there at the end, we could’ve raced it out and put on a better show. It was still nail-biting, let’s put it that way.”

Blaney only led eight laps. However, the No. 29 Ford fought Busch – again – for a victory in the closing laps. Unfortunately for Blaney, he came up short in the top three draft, finishing second.

Blaney believes the late restarts and the lack of help cost him a shot against the Kyle Busch Motorsports duo.

“I just couldn’t hold Kyle down enough when he got a huge run like that,” said Blaney. “I just couldn’t get anyone behind me to help do the same thing to him that he did to me. I knew the [No.] 4 wasn’t going to help me out.”

Although the winner was no shocker, the 14th round of 2015 saw unpredictability from start to finish, including troubles for championship contender Matt Crafton, multiple on-track accidents and some fresh faces towards the front.

With Crafton trying to bounce back from a dreadful Pocono race two weeks ago, the early going saw issues with the windshield on the No. 88.

Racing solidly in the top 10 with 10 laps remaining, Crafton was touched by a spinning John Wes Townley, sliding sideways before saving his truck in spectacular fashion, suffering no damage. Crafton still finished sixth.

Daniel Hemric grabbed his best start of his career, lining up on the front row in second. The rookie had a solid race, stealing the lead off the start, leading his first laps and coming home seventh.

Johnny Sauter had a much-needed fast race truck as he stormed to the lead just before the halfway point, leading 23 laps – having led only 22 laps all season before this weekend. Problems with the right front on a crucial pit stop dropped Sauter from the lead to more than seven seconds behind.

“To drive like we did,” said Sauter who bounced back to finish fourth. “I think we started ninth and drove to the front and then came out of the pits there early in the race, had the same problem and drove right back to the lead.

“Not exactly what we wanted, because we’ve been having kind of a bad year, but a top five is decent.”

Fifth-place finisher Dillon believes he didn’t have “a truck that could lead” as he struggled on the restarts, getting stuck in the middle of the pack similar to that of Talladega or Daytona.

“We got the lead twice and Kyle was able to just pull out on the straightaway and get us,” Dillon said. “Really good through the corners at certain times in the race but just didn’t have enough.”

Behind Busch and Blaney was Jones in third, who played tire strategy to get the lead early, climbing to a strong finish after restarting 17th with 19 laps to go.

Rounding out the top 10 was Timothy Peters in eighth, Reddick in ninth and Cameron Hayley in 10th.

Two young drivers grabbed career-best finishes in Michigan. Jordan Anderson’s 13th-place result was his best in a truck, with Garrett Smithley doing the same in the 14th spot.

Huh? What? Dozed off.

Kyle’s on his way to his desire for 200 NA$CAR series wins (no way he’ll hit 200 in Cup). The way things are going, he won’t have the Busch series or truck series to play in much longer.