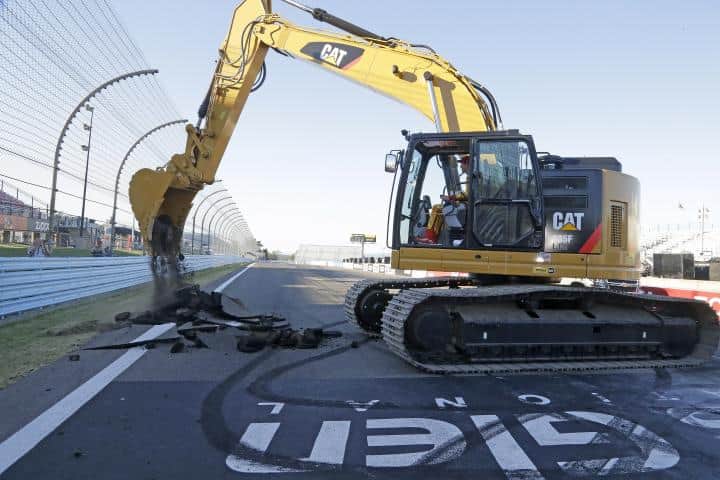 After the race at Watkins Glen, a sold-out event, the track began a repaving project that will be complete by the 2016 season. Will the repave hurt the racing, or will fans still get a good show?

Amy Henderson, Senior Editor: I’m not a fan of repaving any track if it’s not absolutely necessary, but given the winter weather in upstate New York (if you know what frost heaves are, you come from the Northeast and understand how tough frozen ground is on roads in general), it probably was at that point. It won’t make as big a difference as it might on an oval, though the racing is likely to suffer somewhat for a few years. But since this project is making NASCAR consider adding the boot section of the track, that’s a positive as it will likely add passing zones.

Mike Neff, Short Track Coordinator: Repaves generally can result in some less than stellar racing because of the increased grip levels. We’ll see how that plays out in 2016. The fact that we are most likely going to see a low-downforce package next year means it hopefully won’t hurt the racing too badly. The great thing about the repave is that NASCAR is now considering running the boot. Early on the series didn’t run the boot because it felt the drivers weren’t seasoned enough at road course racing. At this point, almost everyone in the garage is capable of winning on a road course. It is time to run the boot and add two or three more passing opportunities.

Phil Allaway, Senior Editor: Repaving at a road course will hurt the show less than it would on an oval. The groove won’t change much, if at all. I’m not worried.

Mark Howell, Senior Writer: The repaving of Watkins Glen is a worthwhile investment in the track’s future. A new surface should mean faster speeds and lap times in 2016 (which might counter the effects of next year’s rule changes for horsepower and aerodynamics), followed by several years of good/even better racing as the track matures into a more settled surface. Toss in some upstate New York winters, and a resurfaced track should evolve into an even more anticipated stop on the Sprint Cup tour.

NASCAR will once again implement the high-drag package this weekend at Michigan. Should we expect anything different than we saw with the package at Indianapolis, and will it improve the racing?

Howell: I predict (and I hope I’m wrong) that the high drag package at Michigan will result in “The Brickyard 2.0” come Sunday afternoon. Expect to see traditionally great racing at MIS turned into typically dull parade laps a la NASCAR 2015. I’m not sure who the high-drag package will disappoint more: the drivers or the fans. My guess is that it’ll be both.

Neff: Hopefully the package is going to be stellar. Indianapolis is a one-groove track, and the package hurt the competition in the corners. Due to the fact that there are four or five grooves in the corners, it should overcome the limitations that were evident at Indy. If the drivers can get a run and continue to complete the pass in the corners, then it could be a fantastic show. If the cars stall out and can’t complete overtaking maneuvers, then it will be an abject disaster.

Allaway: I think that the action should be improved. The additional vents for airflow in the cars mandated this week will help the drivers a little bit, but not much. Drafting plays a bigger role at Michigan than Indianapolis anyway.

Henderson: I’m a little more skeptical than my colleagues; I don’t think the package will be a better solution than the lower-downforce package run at Kentucky. More downforce rarely produces better racing. The racing was better back in the day because the cars were up off the ground, not because they ran giant spoilers — so, less downforce to go along with the more drag. If NASCAR is hoping to make the racing at MIS more like you see at Daytona and Talladega, they’re going to be disappointed. Or at least I hope they are; four races of superspeedway racing is enough.

A report last week stated that NASCAR is looking to add a restrictor plate at Michigan and Fontana. How would the racing be affected by this, and more importantly, would it be good for the competition?

Allaway: Probably not. I think the same argument was thrown around about a decade ago about Atlanta. Yes, you’ll create bigger packs of cars, but you’ll increase the chances for big ‘ol wrecks. It could be a mess. Also, there’s the possibility that it wouldn’t slow anyone down as well.

Henderson: No. Just no. As in, oh, hell, no. There aren’t enough words for “no” in the English language to cover this. The restrictor plate races we already have are bad enough, and trying that on a much flatter track… how many ways are there to say “parade laps”?

Howell: Dear NASCAR, re: adding plates at Michigan and Fontana, hell no! Restrictor plates do not, as we’ve seen since 1988, make for good (as in competitive) racing. Michigan and Fontana have been bright spots on the Cup schedule because they DO NOT require the use of plates. Put some faith in the new rules for next season and see what happens without the drastic change. Any result would be better than sticking plates on the cars and very likely stinking up the all-important show.

Neff: It would be a complete and total disaster. Plates were a band-aid 30 years ago. They do not help with competition, EVER. The plates need to go away, not be added at additional venues. Put giant wickers on the cars. Make them drag parachutes. Anything but restrictor plates.

There were a few incidents over the weekend that left drivers seething, and stating that they’d be looking for revenge. Justin Allgaier vowed to get even with Jimmie Johnson after a spin, and Regan Smith said that he’d make sure Ty Dillon would not win the Xfinity Series title this year after the pair tangled. Is there any real stock to such threats, and could there be title implications from them later?

Neff: Absolutely there can be implications. Drivers don’t forget. You would hope that they would be professional enough to not do something that can injure someone, but there most certainly will be repercussions at some point. It may be this weekend, it may be this year, it may be years from now. As Don Corleone said, “Some day, and that day may never come, but if it does…” it will go down and there will probably be a scuffle on pit road.

Howell: File all these aforementioned threats under “empty” because that’s what they are. NASCAR hopes that something will come of these bitter soundbites after the media storm that erupted last year on the heels of driver run-ins during the Chase. Justin Allgaier dare lay some sheetmetal upside Jimmie Johnson? Really? Revenge might be best served cold, but that means it’s gotta be brought to the table in the first place. Payback sounds exciting, but such an outburst (like any of them we heard last weekend) carries too much corporate weight to be made real.

Henderson: I think if you left the drivers to their own devices, we’d probably see more payback racing. But there are a couple of other things in play that put a damper on “boys, have at it.” One, the sponsors paying the bills don’t generally want that kind of behavior from the drivers they are ponying up millions to see race for good finishes. Drivers are vanilla off the track because their sponsors make it so… it’s not going to be different during a race. Two, there are team implications at play in a world of multi-armed alliances. Allgaier’s team, HScott Motorsports, for example, runs Hendrick engines. It’s likely that there’s an unspoken rule that it doesn’t bite the hand that feeds it. You’ll still see some payback, of course, because drivers are human, but things aren’t what they used to be in the favor-returning department.

Allaway: I really don’t think Allgaier and Johnson are going to have any more problems. I consider that to already be quashed. Now, the Regan Smith–Ty Dillon issue? I think that will have more legs to it, especially since those two drivers are around each other a lot more on track. I look for something to come out of that, maybe not this weekend, but later this year.

Tom Puckett, via Facebook: No; they’ve just got their panties in a wad. They’ll get over it.

Want to see your answers appear in this column?  Check out our Facebook page every Wednesday afternoon to join the conversation!

It doesn’t bother anyone that NASCAR rules change seemingly every other week?

Yes, it does me. But I guess I must be nuts. The press conference today…with the newest head idiot “Steve” had a question posed to him regarding the cost of the changes that NASCAR mandates to the teams..Good grief the newest puppet made it sound like everybody was happy with THE CHASE and working extra hard with their minds, body and money to keep up with the stupid changes that NASCAR is desperately trying to fix, when they should have left the damn thing alone years ago. God forbid the billions the France family gets off the backs of others should be contributed to fixing the screw-ups THEY made.

kb, well so glad I missed that press conference. Nascar is as bad as politics these days. Blah, blah, blah, it’s great, blah blah blah we know the fans love everything we are doing.

JohnQ, NASCAR is using the “throw things against the wall and see what sticks” method of problem solving. Which means it will be sheer luck if something actually works. Of course if it does, they will loudly crow about how smart they are and have always had the best interests of the fans at heart.