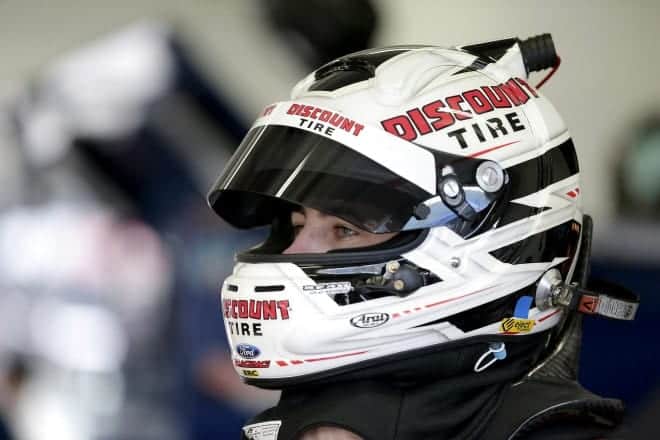 As Ryan Blaney came to the white flag in Saturday’s Lilly Diabetes 250, it appeared that he was going to claim a career-defining win at the famed Indianapolis Motor Speedway. Veteran Kyle Busch ran right in Blaney’s slipstream, but all Blaney had to do was avoid a mistake and he would go to victory lane.

Unfortunately for Blaney, this story doesn’t have a fairy tale ending.

Blaney, who runs part-time schedules for Wood Brothers Racing, Team Penske and Brad Keselowski Racing in NASCAR’s top-three series, was making his way through turn 2 at the 2.5-mile Speedway, Indiana oval when he lost control of his No. 22 Discount Tire Ford, washing up the track and allowing Busch to get a run on him down the track’s long backstretch.

Blaney would attempt to block, but Busch would dive under him as the two drag-raced towards turn 3 to make the race-winning pass.

Blaney would have to settle for second, watching from the pits as Busch burned up his tires on the track’s long front straightaway.

“It was my fault, obviously,” said a despondent Blaney after the race. “I got tight and got in too deep and didn’t get a run off the corner. It’s my fault.

“Everyone on this Discount Tire team doesn’t deserve that. I threw it away.”

Busch had the dominant car on the day, leading a race-high 53 laps. However, a strong restart on lap 75 gave Blaney the lead with Busch running directly behind him.

Busch would stalk Blaney for the remaining 25 laps in his No. 54 Monster Energy Toyota, waiting on the young driver to make a mistake. Despite that fact, Blaney refused to blame the loss on pressure.

“It was no pressure for 24 laps,” said Blaney. “The last one, I just made a mistake.

“Pretty bad feeling to throw one away here at the Brickyard.”

It’s a shame that millionaire Kyle Busch feels the need, along with Harvick, Logano, etc., to ruin these XFinity Series races. I don’t want to see Cup drivers in any NASCAR races other than Cup races. They’ve made it to the top of the sport; STAY THERE!