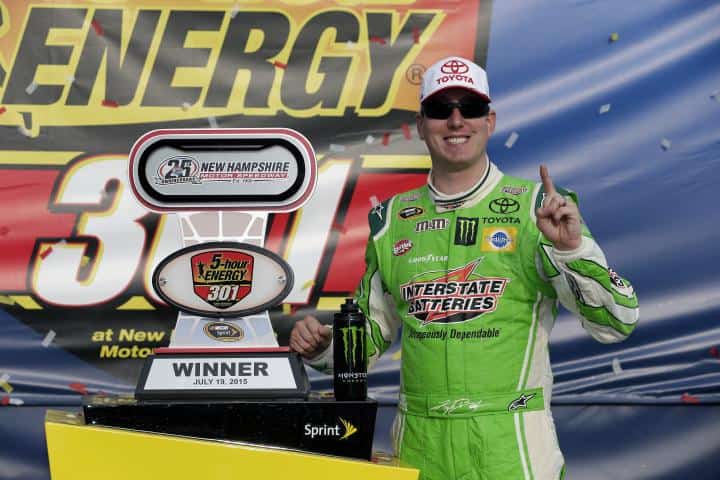 Eight races into his return to competition, Kyle Busch has now claimed three victories in the Cup series. He continues his bid to make the 2015 Chase, taking his second consecutive win at New Hampshire. Busch now sits 58 points behind 30th position. I’ll start the hashtag: #BuschWatch

Teams head to the famed Indianapolis Motor Speedway this week. But before the pomp-and-circumstance begins, see if your favorite driver made the top 15 in this week’s Power Rankings.

Funny stuff, one of the most articulate and accommodating drivers to appease the press and fans, has an off day due to the effects of the heat (he spoke about it, if one cares to read) and the headlines almost read like he kicked a puppy. Jesus, one day…sad indeed…and never a word when one particular driver no matter what series he runs in runs to his trailer like a diva…but he is the “favorite” right now, so he gets a pass..and come to think of it most of the time does. Just calling it like I see it. Certain drivers held to certain standards.

kb, did you notice that Brad K. was the only adult in the sandbox last night at Eldora, apparently there to feed his massive ego and show off his overwhelming talent? Using pit strategy and his usual bull-in-a-china-shop driving style, Brad sniffed the front of the field before crashing out and finishing in the bottom five. OTOH, Kyle Busch gave Christopher Bell his ride as he did Bubba Wallace the year before. No one has given back more to the sport than Kyle yet the haters refuse see the difference between personality and character.

Actually, no I didn’t.

Is this “MessFM” with another name..seems like the same stupid garbage.

How does this power ranking deal work? I’m confused as to why Kasey Kahne is ranked 15th with 26 votes yet Aric Almirola received 33 votes and Austin Dillon received 28 votes.

Chris,
What you saw was a typo. Thank you for pointing it out! Kahne had 46 points. Our power ranking point system is simple. Each contributor ranks their top drivers, with first getting 20 points, 2nd getting 19 points, etc. until 20th, which gets 1 point. The points are then accumulated to get their total score.

Thanks Aaron. I thought I had a pretty good idea of how it worked but you guys threw with Kasey having only 26 votes.