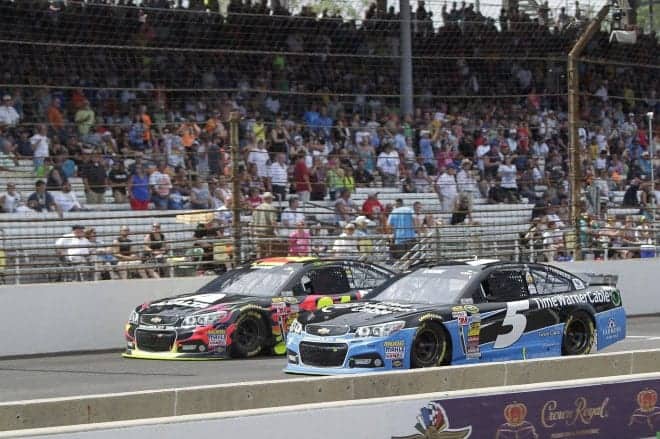 NASCAR continued to tweak qualifying rules in response to the new downforce packages on Wednesday.

In anticipation of more drafting and less single file racing as a result of the higher downforce package, NASCAR has announced that Sprint Cup, Xfinity, and Camping World Truck series qualifying for upcoming races at Indianapolis and Michigan will use the superspeedway format.

The change will allow cars to post a lap unhindered by the aerodynamic forces from other cars, something that has been a problem for racers this season. During Daytona 500 qualifying, Clint Bowyer and Reed Sorenson got together while drafting, igniting a multi-car wreck.

Similar issues have risen in Truck qualifying this season, which led NASCAR to adjust the rules in that series two weeks ago. Any tracks 1.5 miles or longer will use the superspeedway format in the Truck Series.

The format will include two rounds of qualifying, with cars being released at predetermined intervals onto the track. Each car will turn one timed lap, with the top 12 times earning drivers a spot in the second round. After a lap is turned, the car will be impounded until the beginning of the second round.

Following the first round, there will be a 10-minute break. The only allowed adjustments include the addition or subtraction of tape on the grille and the use of a cool-down unit.

In the second round, the cars will take to the track in the same fashion as the first round, with the slowest car from round one going first and the fastest car going last. The top 12 in the lineup will be set by second round speeds.

The Sprint Cup and Xfinity series will use the format in two weeks at Indianapolis. Qualifying for both series will take place on July 25th.