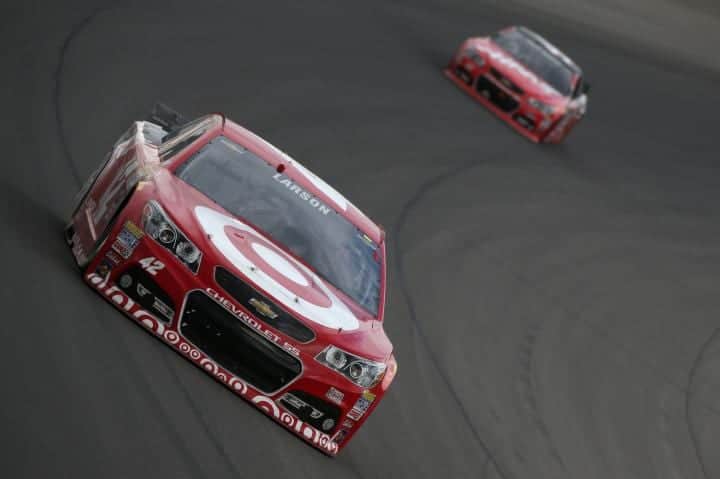 Nearly 48 hours after their first planned on-track time, the stars of the NASCAR Sprint Cup Series finally made their way onto Kentucky Speedway to test the new low-downforce rules package.

49 minutes later, rain brought the session to an early end.

Chip Ganassi Racing driver Kyle Larson laid down a 182.537-mph lap to top final practice for Saturday’s Quaker State 400. Larson, 22, is looking to end a sophomore slump that sees him winless and 18th in series points.

Two-time and defending winner Brad Keselowski ended the session second the charts with a 181.641-mph lap. Keselowski, the 2012 NSCS champion, hopes to claim his second win of 2015 this weekend. He last triumphed in the March 22 Auto Club 400.

Jeff Gordon, Joey Logano and Martin Truex Jr. rounded out the top five. Gordon, whose planned “Jeff Gordon Day” celebration in Pittsboro, Indiana was postponed on Thursday so that he could practice, has won at every track on the NSCS circuit except for Kentucky Speedway.

Jimmie Johnson, Jamie McMurray, Denny Hamlin, Kyle Busch and Dale Earnhardt Jr. made up the bottom half of the top 10.

The sole incident on-track occurred in the first 15 minutes of the session, when Sam Hornish Jr. and Cole Whitt collided on pit road.

Hornish, a former Indianapolis 500 champion, was was attempting to head out onto pit road when he was forced to stop to avoid a collision with Danica Patrick, who was returning to the garage area. Unaware of the issues in front of him, Whitt continued toward the racing surface, running into the rear-end of Hornish’s car. Both drivers would return to the garage area with damage.