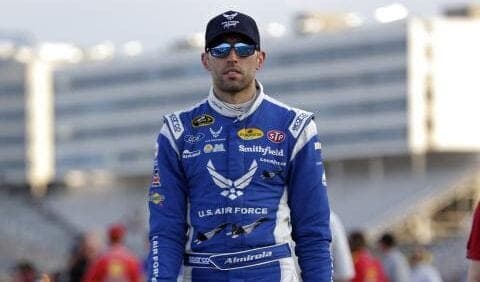 With rain threatening Sprint Cup Series practice again, Aric Almirola took the time to discuss how his opinion of the new rules package and lack of practice for this weekend’s Quaker State 400 at Kentucky Speedway.

Almirola, who currently sits 16th in the championship points standings, answered questions from the media while announcing new sponsorship from Armour Meats, a maker of high quality meats.

“It’s tough,” said Almirola of the weekend’s rain delays. “As racecar drivers, you kind of get focused, get in a mindset to get ready. Being here this weekend, being able to come into the garage and see the new rules package, be anxious to drive it and see how it feels, and then just sit around kind of stinks. Hopefully we can get a few laps in here before it rains again.

“I think we all have a little bit of concern with what it’s going to drive like. We don’t know yet, but we’re getting ready to find out in practice. At the end of the day we’re all professionals. Racecar drivers will get in anything and go drive it, so we’ll adapt. That’s what we do.

“I honestly have no idea what to expect,” Almirola continued. “We’ve made similar changes like this at Michigan and Charlotte, but they’ve been with different tires. As far as I understand, this is the same tire we were gonna run with the 2015 rules package, so I really do not know what to expect. I’m anxious to find out, but I’m going into it completely blind. I’m just gonna feel it out and see what happens.

Almirola confirmed that drivers could race without practice if need be.

“We’re professionals,” said Almirola. “I think we could go out there and race. I think there would be some really ugly-handling racecars and there would be some guys that hit it right, that their simulation gets them headed in the direction that’s good.

Almirola, 31, came into this weekend last year only one week after earning a Chase berth with a win at Daytona International Speedway. This season, the Richard Petty Motorsports driver currently sits 24 points off of the Chase cutoff, in need of a victory to secure himself in the playoff.

The Floridian said that this weekend would be all about which teams had the best simulation.

“Whoever’s computer comes up with the best setup is probably going to have a good weekend,” said Almirola. “When we go through weekends like this where we do have a new rules package, coming here to Kentucky Speedway and not getting much practice, the simulation’s going to be really important.

Through it all, Almirola, in his fourth full-time season in the Cup Series, remained optimistic that his team could get to victory lane.

“Hopefully we’ve got all of our Is dotted and all of our Ts crossed with our simulation,” said Almirola, a slight air of confidence in his voice. “Hopefully the car’ll drive good for the little bit of practice that we’re going to get, and then we’ll line it up and go racing and see what happens.”