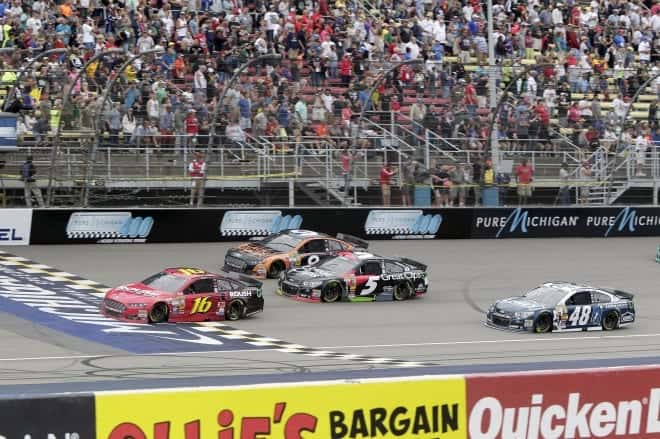 One of the debates that surrounds auto racing is one that continues to rage, that being how to classify it; is it a sport or just entertainment?  In NASCAR, this debate is fueled by what appear to be manipulations in the racing or things like phantom-debris cautions, green-white-checkered finishes, the lucky dog and the list goes on. However, every sport is governed by its own set of arbitrary rules for whatever reasons – seriously, why is an American football field 120 yards long by 53.33 wide? 53.33, huh?

The definition of sport, however, encompasses the notion of entertainment, making reference to it being for recreation and for others to enjoy. The concept of sport being for profit is one that is murky, depending on how one wants to look at gladiators, or knights, but from a capitalistic standpoint the concept took off with horse racing in the U.S. and has continued from there. The one thing that tends to be less murky is the role of the competitor, often labeled, the athlete.

This concept is one that has also earned its share of attention over the years, with Donovan McNabb opening his mouth and denouncing NASCAR drivers not too long ago. This column is not going to get into that debate but rather has a different question: what is it that drivers really do to prepare for race weekends?

A number of drivers have had their workout regimen documented, with Mark Martin leading the charge. But Jimmie Johnson, Kevin Harvick and others have all received attention for their endurance and other things they do to stay fit. Staying fit and preparing to race are different things, however. A baseball player practices the things that he will do on the field. A football player runs through drills, focuses on footballs, goes through drills for his hands.

In Formula 1, the drivers spend an amazing amount of time in simulators, racking up miles on virtual tracks and preparing themselves to handle all sorts of issues. This aspect of NASCAR has yet to receive much attention, aside from Dale Earnhardt Jr.’s dedication to playing racing games online. What is it that they do? Do they have simulators that change track conditions or the car condition from fresh tires and full fuel to worn tires and an empty tank? Something that clouds the matter further is – just how are they supposed to be preparing when they’re jetting all over the country for driver appearances. Seriously, even a nascent Cup star like Chase Elliott logs a ton of miles during the week, jumping from Las Vegas to Missouri to who else knows where. Just when are these guys practicing?

This part of the sport is one that deserves more attention if it is going to continue to sell itself as being remarkable. No doubt the drivers are doing something (well, except for maybe Sam Hornish Jr., because there’s still questions there), it’d just be good to know what.

Happiness Is… New Hampshire. For some reason, the flat track in the Granite State tends to endure a fair amount of criticism. The 1-mile track is the site of two NASCAR fatalities, incidents that may have had as much to do with safety changes in the sport as did Dale Earnhardt’s death at Daytona. That looming mood has largely been replaced by a devil-may-care attitude about the place, one that has now turned toward indifference. Passing is difficult at the track, something that is sure to be made worse with this year’s aero package.

Cheer up everyone! The track had already announced that Adam Sandler, he of such luminous films like Little Nicky and You Don’t Mess With the Zohan, will be giving the command to start the engines. If that wasn’t enough incentive to go or watch the race, the track has now announced that Bret Michaels, yes the bandana-ed balladeer, will be the pre-race entertainment.  You read that right – if you’re looking to be transported back in time to say the early 1990s, New Hampshire has found a way for you to do it. Be sure to wear your Zumbas.

Happiness Is… Actuality. They said it could not be done. They said it would never happen. They said it was just some kind of mystical pipe dream full of wasted money, squandered hours and superficial discussions. But nay. Behold! Gene Haas’s Formula 1 team has actually produced what looks like a car. OK, the team has presented its show car in Belgium. It may be a composite of parts from all kinds of cars, and  it may be something that never runs, but it is more progress than USF1 ever showed.

To break into F1 as a start up is a treacherously difficult task. That Haas (cough cough, Hendrick) runs a Cup team as well as his other business ventures just adds to the effort required. Unveiling some semblance of a ride shows that Haas really is committed to entering the sport, even if they still have quite a long way to go. At some point, naming the drivers is going to have to be a priority.

Happiness Is… Michigan. Fathers of the world, rejoice! For years the first race at Michigan has run Father’s Day. While New Hampshire may get criticized, how come no one has called out the 2-mile track in the Irish Hills for being contemptibly lame. Sure, the talking heads are going to say that the drivers love the track, that it’s so wide that you can run anywhere which makes passing better (chuckle, chuckle) and that the speeds are awesome, and yadda yadda, but for some reason, this track just doesn’t inspire excitement. But hey, this year it won’t be competing with any fatherly activities, which is a sense of change that is all too surprising for a sport that enjoys change like five-star chefs do McDonalds.

Seriously??? You think anyone that goes to a race gives a shit who gives the opening command or the pre-race entertainment? Or was that sarcasm?

Michigan is the second most hated track by the fans. Only the Brickyard is hated more. But, as much as a lot of people hate the place, there is one slightly minor point about that place that makes it a favorite by some fans. Half the crowd there is “foreign”. So many people from Ontario make the trek twice a year. It’s the closest track to many of us. Less than five hours from door to parking lot, including the time to cross the border. Add an hour to stop at a Bob Evans or Denny’s. Too, walking around some of the camp grounds, and the parking lots, it makes one feel like they never crossed the border with all the cars, campers and RVs bearing Ontario license plates. Until that fictitious track in Fort Erie gets built, for some of us, Michigan is the only track close enough and convenient enough to get to.

Michigan used to have some of the best races of the season. Maybe it’s time to blame the cars and drivers instead of the tracks. Where is today’s Curtis Turner or Cale Yarborough? How would you describe today’s drivers? Pampered pansies who don’t have to “race” for a living.

I’ll bet that by now even NASCAR knows that the on track product is nothing more than IROC without passing. But, by allowing three or four organizations to become so gigantic NASCAR has placed itself in a position where they can do very little to improve the racing if it costs those organizations money. Can you imagine anyone involved with NASCAR having the balls to tell. Hendrick that he could not supply every third engine on the track. All he has to do is threaten to pull out and NASCAR would back down. Complain about the tracks all you want the big problem is the cars.

“IROC without passing”. About as succinct and truthful as it gets.

Hearing NASCAR may further lower downforce during this season. Hope so.

Gotta agree with Bill. Certainly I never made plans to go to a race based on the pre-race entertainment or who is giving the command. I know that was how the Hollywood (Fontana) track tried to market themselves, but personally I like to see a race on a track that produces side by side racing and passing.

Hmmm, guess that’s why I’m not going to many races in person these days.

Interesting article but I think you pulled back by saying “appear to be manipulation” instead of saying clear and blatant manipulation. Did Jerry Jordan edit this for you? As far as drivers go, I give more credit to the team behind them than I do the driver. While a good driver may be worth hundredths of a second a lap, a good car can be worth tenths per lap. An athletic and practiced driver probably only yields thousands of seconds per lap, if that much, over a driver like say Stewart.

Yeah this column writer is about to be added to my “don’t bother to read” list which already includes Summer & Jerry Jordan.

The drivers love big, wide tracks that don’t challenge their skills. But those tracks are super boring to fans.