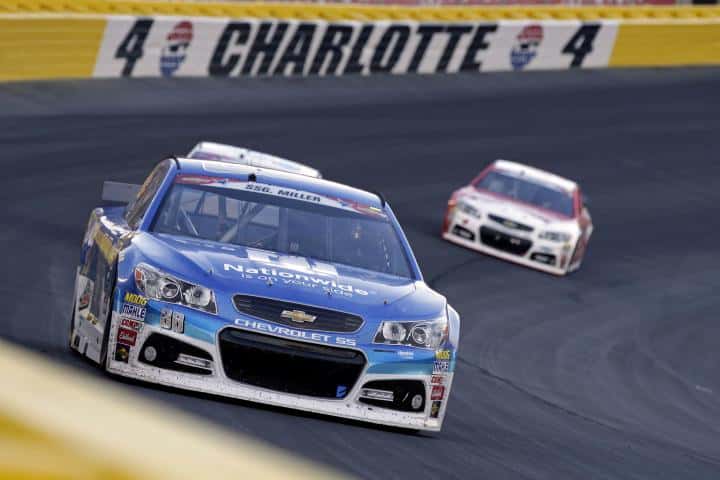 ONE: The Horrific Tapered Spacer at Intermediate Tracks

After seeing the horrendous racing during the All-Star Race, the Coca-Cola 600 was a pleasant surprise. There were nine leaders and 14 lead changes within the first 100 laps, which is seemingly impressive. However, besides the twist of a few cautions and fuel strategy coming into play, there weren’t many passes on Sunday evening.

The tapered spacer is clearly not working. Speeds are up in the corners, which has been the problem with the Xfinity Series for almost a decade. Teams are complaining about the inability to pass, and for the first time this year, broadcasters Mike Joy and Darrell Waltrip finally brought this problem to light on national televisions. With higher speeds in the corners, it would take someone getting loose to make a pass. The only problem with that is, it takes nearly spinning out or figuring out a line that can give a driver approximately a tenth of a second extra each lap.

After a 31-race winless streak, Carl Edwards is back in Victory Lane. The win is extremely important for Edwards, and it was also his first top five with Joe Gibbs Racing through 12 events with the team. Swapping organizations has been a little rough around the edges, but the No. 19 car used the perfect strategy to win a race and lock into the Chase.

Joe Gibbs Racing now has three of its four cars in the Chase, and the likelihood of getting each of them into it is rather high considering Kyle Busch‘s stellar performance at Charlotte. But Edwards’ victory elaborates on the potential that he has now that he is out of an uncomfortable environment. He showed that he has enormous faith in crew chief Darian Grubb, and the momentum from this win is likely going to carry over for multiple races.

Greg Biffle‘s second-place finish is extremely surprising. Roush Fenway Racing has been abysmal this season in every sense possible. However, after a solid run at Kansas, Biffle ran inside the top 10 for a large portion of the 600-mile race at Charlotte. His strategy led him to his first top five since Pocono in last August, but that is not what the team should be excited about.

Running in the top 10 showed that Biffle is slowly coming around. He finished a solid 12th at Kansas, and even won a segment in the Sprint Showdown. However, there is still plenty of growing for the three-car RFR organization. Ricky Stenhouse Jr. was running in the top 20 for the majority of the race, and though he was lapped early on and eventually finished 37th. His run was still more impressive than that of Trevor Bayne, who is in his first full season in the Cup Series, and has yet to crack the top 15. If all continues to be good and humble at the Roush stable, Biffle might be able to sneak in a victory, and his two younger teammates can show potential to run well next season.

FOUR: Kyle Busch’s Rainbow Car Driving to a Golden Ticket in the Chase

Contending for a win at an intermediate track in NASCAR’s longest events takes a lot of strength and stability. For Busch, making a return to the Cup Series was a step in itself. The new father ran extremely well at Charlotte – running as high as second at one point – and finished 11th.

Refusing to step out of the car though he admitted to some soreness in his injured foot, Busch showed he is back to himself in a racecar. His demeanor is still the same, and now he is set on making it into the Chase. As long as he has an average finish of approximately 15th, with a victory, he will be in the Chase for the Sprint Cup. After Sunday night’s race, there is very little that goes against the possibility of Busch winning in the Cup Series, even after experiencing the new aero/engine package for the first time this season.

FIVE: A Simple, Yet Disappointing Hall of Fame Class

The NASCAR Hall of Fame class for 2016 was announced last week, and included two surprising names. Terry Labonte, a two-time champion in the Cup Series, was named a Hall of Famer in his first year as an eligible candidate. However, the former Hendrick Motorsports driver just officially retired in October, and there is something called too soon in this world. Labonte is not that old, and putting him into the Hall of Fame just one year after his retirement could lead to people forgetting about his accomplishments on the race track in the future.

Curtis Turner, a 17-time winner, was also inducted into the Hall of Fame. Turner is obviously deserving of being in the Hall, but there is not really a time table for when he should have been included in this elite group. Meanwhile, legendary team owner Rick Hendrick was snubbed from the Hall of Fame once again after voters argued that he is “still writing his story,” and the same can be said about Richard Childress. Robert Yates was also missing from the list of five inductees, along with Benny Parsons. As our Amy Henderson stated in a column last week, there needs to be a change in the criteria for electing people into the Hall of Fame.

Carl, after 600 miles..a guy who was a nonfactor? He did take the checkers, no disputing it, but damn..history might make him out to be he duked it out with the best of the race, he did not. Too bad for Martin T. clearly the most consistent and deserving all day. The spin will be in this week. Kinda weird the whole race. But then again, this is how the year has been. It was another yawner.

Amen on the tapered spacer. Who looked at the Saturday races and said, “we need to bring that to Cup!” There’s no reason to get cranked up over Hendrick not getting into the hall yet. With the lion’s share of championships and race wins for 20 years, not to mention publicity, he will get in soon enough. And no one will forget him; many broadcasts feel like Hendrick infomercials anyway.

You seem to be blaming the spacer for the higher speeds in the corner, but I don’t see it.

Speed through a corner is affected by the handling, the better handling a car is, the less a driver will brake going into the corner. The spacer affects the acceleration out of the corner.

I guess it’s just me, but not voting Benny Parsons into the HOF is unforgivable. I like Terry Labonte, but picking him over Parsons at this stage of the HOF history is just baffling.

Put the blame for the tapered spacer on the owners. Everything I’ve heard is that they were put in place with the goal of allowing teams to run an engine multiple races. The owners have been crying for cost savings and NASCAR gave it to them. Take the spacers off and take away more downforce.

Actually the word was that Ford preferred the spacer because it wouldn’t obsolete everything overnight. The other two manufacturers wanted a more costly approach. Eventually common sense prevailed. Why spend millions more dollars on something that has no relevance to what you are selling?

The Coke 600 was another boring race. Nothing much to see and even less to say about NASCAR and its so-called “racing”.

Summer weather is here – if the weather is good, I’ll be outside doing something way more fun than watching NASCAR on TV.

I stopped watching plate races years ago. Looking for ways to slow an engine down is the antithesis of racing. When the cars get too fast the logical thing to do is to lower displacement and then see just how much speed can be squeezed out of the new smaller engine. But we’re talking about CASHCAR here, not racing. The racing choice of smaller displacement with the possibility of actual innovative thought would cost the three or four designated engine builders money. We can’t have that. A tapered spacer is a plate with a new name designed to accomplish the antithetical racing objective of sluggish throttle response. I watched fewer races this year than last mostly because of the “it’s not a plate” plate. Somehow the bloom is off the rose when a Cup car couldn’t beat a Shelby Mustang into Turn 1.