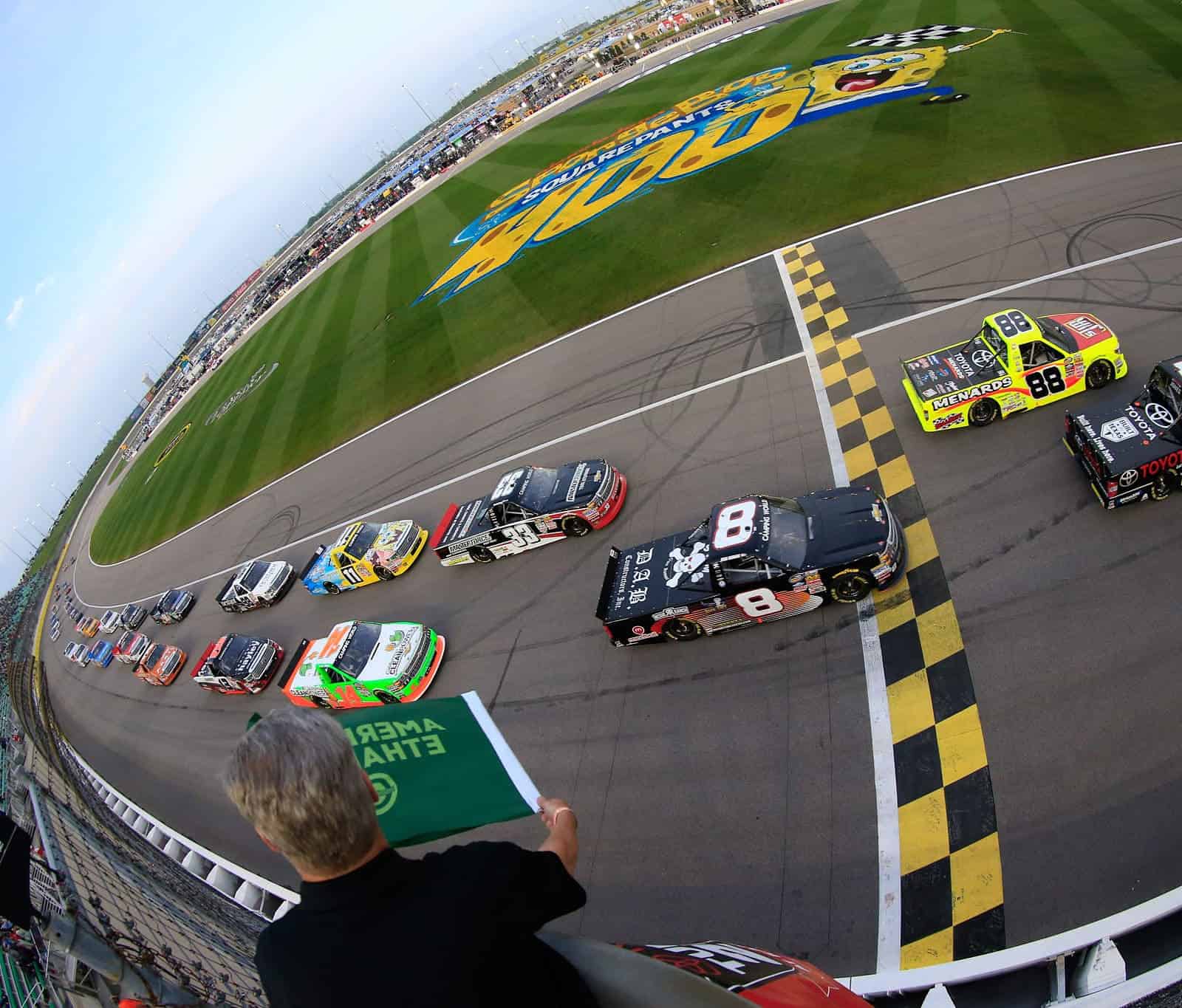 For the second time this season, the Camping World Truck Series has back-to-back races scheduled and will once again be on track at Charlotte Motor Speedway Friday night. Fresh off of a return to racing at Kansas Speedway, there was plenty to remember about in a race largely dominated by Erik Jones.

Matt Crafton said those words on the team radio after taking the checkered flag at Kansas Speedway last Friday night, and he couldn’t be more correct. After spending much of the first stages of the race as the only driver with any hope of keeping up with a dominant Jones, Crafton took four tires, courtesy of a vibration, when several of the front-runners took two. That extended stop cost him multiple positions, and he restarted deep in the top 10. Mired in traffic, the handling of the No. 88 Toyota was the same as when he had clean air, and it looked like Crafton would have to settle for a top-five finish – hardly a poor result, especially for a driver looking for his third championship.

But as the laps wound down, fuel tanks began running dry, leaving Jones and Daniel Suarez, among others, to coast to the finish, allowing Crafton to capitalize for his second win in four races.

But the thing about that quote is that it wasn’t just the Kansas race to which it applied. So many times across the board in NASCAR, we’ve seen a driver dominate a race only to have a pit road penalty, an empty fuel tank or even a late caution derail the win that, just laps earlier, had seemed inevitable. Sure, there’s plenty of skill associated with racing in NASCAR, but the factor of luck will always be there in some capacity. It’s just easier for a driver to swallow when he’s on the positive side of that luck.

ThorSport Racing is on a tear right now.

While most of the focus has been put on Crafton – and for good reason – ThorSport Racing made history Friday when the organization put all three of its trucks in the top five. Crafton’s victory marked his second in four races, and it allowed him to expand his point lead to 17 over Tyler Reddick. Meanwhile, teammate Johnny Sauter struggled with an engine that went south with just five laps remaining and managed to back off to save fuel, finish third. Cameron Hayley, who moved to the organization this season to pilot a third entry full time, scored a career-best fifth.

There’s little secret in just how well Crafton has been running all year, once again leading the points early on. His finishes this year have been eighth, first, second and first, something that will be nearly impossible to beat if the No. 88 team can keep this streak going. Sauter has also finish inside the top 10 in each race; he started the year with a 10th-place finish at Daytona and has gotten progressively better. An average finish of 5.8 leaves him sitting fourth in points right now. Meanwhile, Hayley has been off to a bit of slower start after a DNF at Daytona. The fifth-place run at Kansas marked his first top five and top 10 this year, though he has finished in the top 15 in each race since the season opener. The bottom line is that it looks like this organization is the one to beat for the championship again this season.

Erik Jones has a strong future in NASCAR.

OK, so this one has been obvious for a long time, but Jones set out to ensure no one forgets the talent he has. Hand-picked by Kyle Busch after the 18-year-old beat him in the Snowball Derby in 2012, Jones has made the most of his opportunities in NASCAR. Before he even started racing in the Truck Series full time, Jones made 17 starts across the 2013 and 2014 seasons, scoring four wins, seven top fives and 13 top-10 finishes. Clearly, the decision to put him behind the wheel full-time this season was a smart move.

Last weekend at Kansas was no different. Jones led 151 of 167 laps in what was sure to be another victory for Kyle Busch Motorsports. But as the fuel tank ran dry, so did his hopes of celebrating that night; he was left to settle for an 11th-place finish, one lap down. The following night, Jones made his Sprint Cup Series debut behind the wheel of the No. 18 Toyota for Busch, who was still healing from injuries suffered in an Xfinity Series wreck at Daytona in February. He ran aggressively and was solidly inside the top five when the car just snapped loose and he ended up in the wall. While the results he posted over the weekend aren’t anywhere near an indicator of how he actually raced, Jones should still be happy with his performance. Clearly, he has plenty of staying power in NASCAR – if he can continue to end up in solid equipment throughout his career.