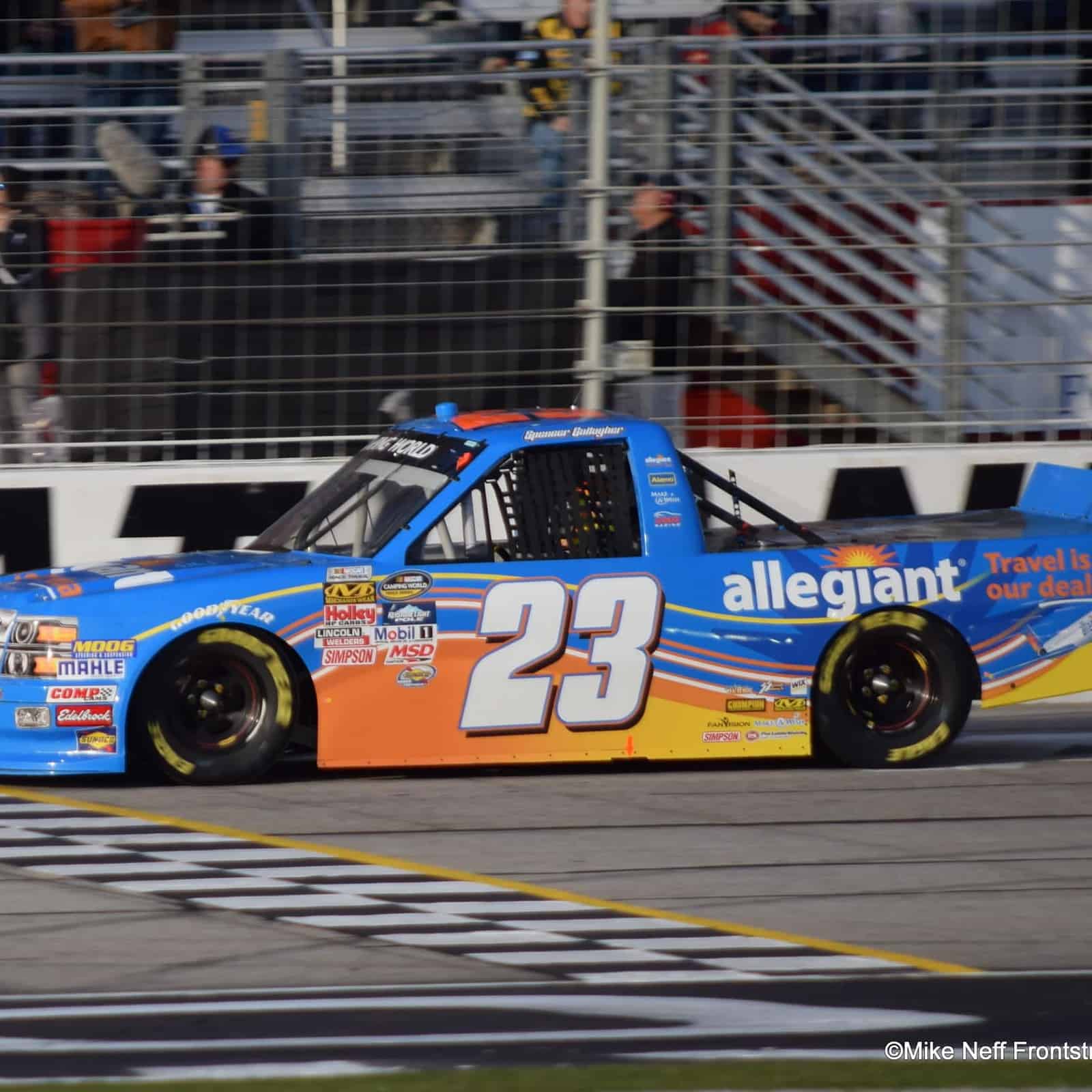 Planes might go a lot faster than racecars, but one driver will leave that passion to his father. Spencer Gallagher, driver of the No. 23 Chevrolet for GMS Racing in the Camping World Truck Series, races for his dad’s team, which is also sponsored by his company, Allegiant Travel Co.

After getting a late start in racing, the 25-year-old is now running in the Truck Series after winning his first career ARCA Series event at the conclusion of the 2014 season. Following the first four races of the year, Gallagher sits 10th in the championship standings, but he expects to finish up the year inside the top five. Working with the Dillon brothers, along with Brandon Jones, he believes GMS Racing can become a leader for Chevrolet and eventually work into the NASCAR Xfinity Series. Gallagher spoke with Frontstretch about his future, expectations for this year and why he believes he can be successful in NASCAR.

Joseph Wolkin, Frontstretch: How would you evaluate your first few races of the year?

Spencer Gallagher: They were definitely learning experiences. At Daytona, we had some real serious speed, but we unfortunately got caught up in the big one. Before that, we were pushing my teammate Ty Dillon to the lead. At Atlanta, we ran into some trouble with some framing height clearance issues.

We were fast throughout all of practice and in qualifying as well. During the race, we had some issues keeping the nose where we wanted it, so it dropped off a little bit of speed there. Overall, I think they’ve been really positive experiences. I’ve learned and my team has learned and grown with me.

Wolkin: What are your expectations for the remainder of the season?

Gallagher: The thing is, I expect great things from both my team and myself in this stuff. I want to see myself and my team inside of the top five at the end of the year in the standings.

Wolkin: How is your relationship developing with your new crew chief?

Gallagher: We’re getting along great. Jeff [Stankiewicz] had an existing relationship with us at GMS. He was with Joey Coulter last year, and we took to each other pretty immediately. I’m really enjoying working with him and I look forward to the rest of the year and spending it with him.

Wolkin: What benefits does the team have with the Dillon brothers piloting the second truck?

Gallagher: It’s huge. The biggest thing that they give us is a great baseline for our equipment. I’m still new to driving the trucks, so whenever I have any type of question, I know I can always turn to Ty or Austin. They’re going to help me out anyway that they can, and they’re going to give our crew chiefs new information to work with.

Wolkin: At the end of last year, you started to be more competitive both in ARCA and the Truck Series. What created the higher levels of success?

Gallagher: It’s just experience. I’m still pretty young in my racing career. I only got started in 2009. I’ve been growing as a driver and a professional. I really felt the improvement last year – gelling with a new team and running at a competitive level.

Wolkin: How much added pressure do you have with your father’s company on the truck, plus him being the team owner?

Gallagher: It’s obviously huge pressure. You not only have to answer to the team owner, but you have to answer to dad when things don’t go right. It’s a different relationship than you would have with a traditional team owner because not only do you have to explain when things don’t go right, but you might have to explain those things at a family dinner, which could make for some interesting conversations sometimes.

Wolkin: How has Chevrolet helped your team out?

Gallagher: Right now, Chevrolet is helping us getting wind tunnel and technical support, which are the two biggest factors that we’ve seen that have helped us. It’s all on the engineering side. They’re helping us get our stuff standardized and it’s a great help to have their support.

Wolkin: Is it surreal to you that you have the opportunity to go out and contend for wins in such a competitive field?

Gallagher: It’s such an honor to run in the Truck Series field because it’s so competitive. To know that I can go out there and run toe-to-toe and run at my own pace makes me feel great.

Wolkin: After your ARCA win last year, you might have been more ecstatic than anyone I have ever seen. Have you always been so energetic?

Gallagher: Well, I’ve been waiting to get that one done for quite some time. What I tell people when they ask me why I’m like that, I say: I’m one of those guys that is not afraid to admit that, besides all of the circumstances of doing what we do, I love my job and I like to express that. I like to let people know that because if you’re doing something that you don’t love and doesn’t make you feel like that, you’re really making a mistake in life. I really love what I do and I’m not afraid to show it.

Wolkin: What is your ultimate goal in this sport? Do you feel like you are going to move up to the Xfinity Series later this year or next year?

Gallagher: My ultimate goals in this sport are pretty simple. It’s Cup [Series] or bust. We’re going to look at moving into the Xfinity Series when we feel the time is right. The nice thing about what we’re doing is that we feel like we have the luxury of doing it when we’re ready. When we entered this sport, we had a goal of reaching the top series and we’re not going to stop until we get there.

Wolkin: What is life like for you off the track?

Gallagher: I’m a bit of a nerd, so I like to enjoy my video games. I’m currently playing a couple of different ones right now – Destiny and Team Fortress 2. Beyond that, I’m actually a bit of a traveler. Whenever I get a free weekend away from the race track, I like to travel around the country and see all of the different cities.

Wolkin: What drew your interest into racing?

Gallagher: It was the relationship with the Clark family. TJ always helped us out, and one day – I just started winning without any real training or experience. TJ sat me down one day and said I should consider doing it seriously. That was sort of the genesis of the whole thing.

Wolkin: With your father owning the team, does it give you a bigger say of what goes on?

Gallagher: At the end of the day, I’m just the guy that holds the steering wheel, as he likes to say. Just like any driver, I give my two cents in the organization that I call home. It’s not uncommon for me to be reminded that I’m just the driver.

Wolkin: Coulter is moving over to the marketing side for this year. How important is it to still keep him around in case there’s an open seat available?

Gallagher: It’s very important for us to keep Joey around just from an organizational standpoint. I knew when he took him on was that one of his greatest strengths was going to be his talents in the managerial realm. That’s something he has come into his own with this year and I can’t say enough how pleased I am to have him around.