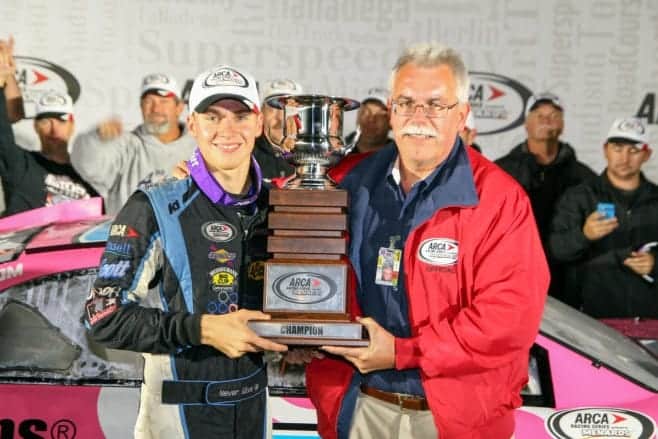 Owning a team in stock car racing is quite difficult. But at 20 years old, Mason Mitchell has become a leader for his self-owned ARCA Series team, Mason Mitchell Motorsports.

Don’t be fooled by the alliteration, especially since Mitchell piloted his No. 98 Ford to the winner’s circle once last season en route to the ARCA Series championship in just his second full-time season. Earning 20 top fives and 36 top 10s in 46 career starts, he has proved he is capable of running with racing’s top drivers. However, funding has forced him to take a back seat this year as Austin Wayne Self is running full-time for the team in 2015, which has left Mitchell competing part-time and still looking for sponsorship.

The youngest owner in the ARCA Series continues to aim for another championship with Self. Moreover, he feels it is time to move up the rankings if a team will sign him. Mitchell spoke with Frontstretch about his journey as a team owner, being a mentor to Self, his plans for this season and how he believes he is on the path toward success in NASCAR.

Joseph Wolkin, Frontstretch: How would you evaluate the team’s performance to start the season?

Mason Mitchell: I would rate it a solid B. Daytona wasn’t the end result we wanted after we ran decent there. It was the first time we had two cars. We went down to Mobile and ran very strong, with both cars leading laps. Austin finished fifth and then we went to Nashville and Austin finished third. The performance has been getting better. There are always things we need to keep working on and keep on digging. We can never think we are good. We always need to think we are innovative with some stuff. Right now, it is a B, but we just have to keep on fighting.

Wolkin: What has been the biggest difference adjusting to racing against some teams that are using the new composite bodies, while you have mainly used the steel bodies?

Mitchell: Both of the changes are great for the series long term-wise. The new engine – something to adapt to with it – is the initial investment, but you have to look at the long-term plans. It is a pretty solid power plant and it is pretty reliable. Obviously, you need to run it to be successful and win.

The new bodies have been really neat and cool to work with. They look really cool on the racetrack. We only have one car that has that. I don’t see any advantage or disadvantage to running the steel body or the new composite body right now. Maybe that will change in the future, but they are both really competitive cars.

Wolkin: Do you feel like there is a difference on track while racing against a composite body while you are in a steel body?

Mitchell: I definitely think the composite body can beat and bang a little more just because it is really built well. You can move people out of the way pretty easily and not have any torn up fenders or any sheet metal damage.  Aerodynamically, the steel body cars are still a little better.

Wolkin: What drew your interest in hiring Austin to drive the car full-time this year?

Mitchell: We have known each other for the last year or so while racing on the track. He was really interested in our program later in the year. We were able to work some stuff out and get him over to our program, and help his crew out, along with our team.

Wolkin: Austin had a lot of great things to say about you when I spoke to him, and even said you like to help him with his homework. What benefits come with working with someone that is near your age?

Mitchell: You have to show him the ropes and everything you have in place here. As a driver that wants to be with our race team, you have to be here at 7 a.m. just like everybody else. It is a team sport and everyone has to put in the work and be a team player. Whether we have to help him with school work or giving him work in the shop, it has been a learning year for him and for us.

Wolkin: What have you been up to now that you aren’t racing full-time?

Mitchell: I’m 100% focused on racing and furthering my career and this company. I feel like I’m working harder than last year since I have a bigger role in taking stuff over. I’m focused on the part-time schedule that I have, trying to win every race that I’m in and keeping this company moving forward. Hopefully, I’ll be back in the seat full-time. I’m definitely not giving up on that, and there is no doubt in my mind that I will be back on the track soon.

Wolkin: What did you learn when you ran the Truck Series race at Homestead last year that you might not have been able to learn in an ARCA car?

Mitchell: Well, the Truck Series is just a whole different animal. There is a different aero effect on the trucks and I was just learning how to race with the Camping World Truck Series drivers at Homestead-Miami Speedway. It is an awesome race track and I really love that place. I think we had a better truck than where we finished, but circumstances put his back there. I learned a lot and I’m looking forward to the day when I can go race in the Camping World Truck Series or the Xfinity Series soon.

Wolkin: Do you approach marketing partners any differently now that you have that championship under your belt?

Mitchell: Absolutely. You have to leverage your success a lot in the industry. With this industry really based on marketing partners and relationships, you have to leverage that a lot and show them the success that I have had. This is not only with marketing partners and relationships, but with team owners and people out there who are making the calls for my next step.

Wolkin: How many more ARCA races do you plan on entering this year?

Wolkin: Have you spoken to any teams about running anything this year in the Truck Series or Xfinity Series?

Mitchell: Yeah, I have. I’ve spoken with as many people as I can here. I try to talk to more people every day. My business card is out there with ‘driver for hire.’ I think there is some interest. It just takes the whole package and trying to put that package together.