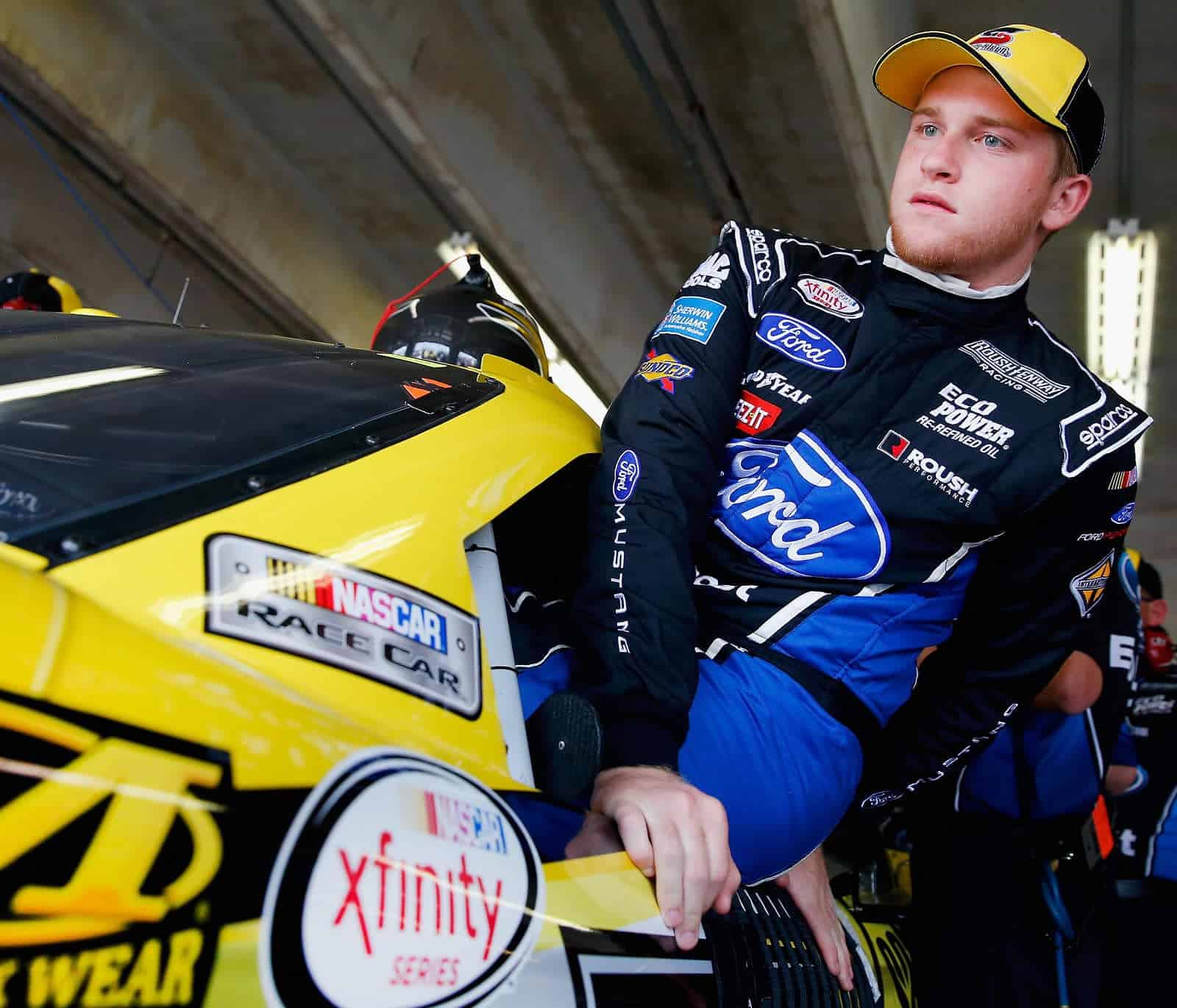 Ford has struck gold once again. For the first time since Carl Edwards joined the Ford banner in 2002, the Blue Oval has found a driver that is extremely unique.

Fast, furious and focused is how Chris Buescher is behind the wheel. With the right driver/crew chief combination, the Texas native has excelled in the NASCAR Xfinity Series, and has done so without many wrecks in his first 47 starts.

In his second full-time season, Buescher sits second in the standings behind Richard Childress Racing’s Ty Dillon through six events. While the season might be young, the No. 60 team is just starting to hit its stride.

Last year, the 2012 ARCA Series champion out-dueled Regan Smith and Brian Scott at Mid-Ohio to win his first Xfinity Series race. Prior to that run, he had seven top 10s, but he earned seven more in the final 11 events. The win marked not only the start of his career, but it showed that Roush Fenway Racing has finally found the driver that can turn its team around.

The gift that Ford needs comes at the perfect time after Edwards’s departure for Joe Gibbs Racing, which was preceded by 2003 NASCAR Sprint Cup Series champion Matt Kenseth leaving for the same time two years prior.

Buescher was a winner immediately when he started racing in the ARCA Series for Roulo Brothers Racing, which has a developmental program with Roush. In his 57 ARCA starts, he amassed 10 victories, and did so by showing just how much he wanted to succeed like his cousin, James Buescher, who won the NASCAR Camping World Truck Series title the same year that Chris won the ARCA championship.

However, the cousins are much different from each other, and the younger Buescher has much more potential. He is with an organization that needs a fresh face to bring in sponsors. His demeanor on the track is rare, and if given the right equipment, he can run like Edwards did in Roush’s equipment.

As he worked through the rankings to become a full-time driver in the Xfinity Series, Buescher struggled to find funding to race. That cannot be said for Ricky Stenhouse Jr. – Roush’s last champion – who also had limited sponsorship, but was put on track anyway and wrecked his way out of a ride at one point.

That is certainly not the case for Buescher, and that is what has led him to becoming a championship favorite early in the 2015 campaign.

After systematically breaking into the Xfinity Series last year, he has figure out how the cars drive. Buescher missed the season opener in his rookie campaign due to the epic fail of what was the first attempt at group qualifying at Daytona in the series, but rebounded fairly well. He ended the year with an average finish of 12.6, which was better than his cousin, plus teammate Ryan Reed.

With an added level of confidence, he is set to win another title, and in doing so, he could be the next big thing that Ford needs at a key time. The manufacturer is doing well with Team Penske and Brad Keselowski Racing, but all of its other entities are struggles, including Roush and Richard Petty Motorsports. The lack of an alliance between the organizations is part of the reason why Buescher can spearhead Roush’s future.

Neither Trevor Bayne nor Stenhouse are going to be championship caliber drivers. They have potential to win races and make the Chase for the Sprint Cup, but a title is highly unlikely given the team’s current lack of success.

But what Buescher offers is not just another driver like those two, or even veteran Greg Biffle for that matter. He is smooth and consistent, like reigning champion Chase Elliott and the Dillon brothers. That is what has led him to be runner-up in the standings this early in the year.

With three top fives – two of which have come at intermediate tracks – he has shown a possibility of light at the end of the tunnel for what used to be Ford’s top-tier team. He, along with crew chief Scott Graves, have reached the point where they know what they are looking for on a given race weekend.

Even on days where they have struggled, the two have put together top-flight efforts like Elliott has over the past year. At Texas, the team struggled with handling, and bounced around the top 10, but fell out of it at one point. However, they came back and persevered for a top 10. If they can keep it up on a weekly basis, turning those bad days into top-10 efforts will be a key to competing for a championship.

His efforts in the Xfinity Series have led to a chance to run the No. 34 car in the Cup Series for Front Row Motorsports. In his debut at Fontana, Buescher finished 20th with a team that had an average finish of 29.4 last year. In the following race at Martinsville, he ended the day in 24th, which was still rather impressive for his first time at the short track. Moreover, he finished 30th at his home track in Kansas, which was still an improvement from David Ragan‘s 35th-place result at the track last year.

Now Roush is in a bit of a pickle. It has a championship-caliber driver in its stable, but are reluctant to rush him up to the Cup Series like Stenhouse. Obviously, they are two very different drivers, but the same mistake cannot and will not be made twice.

A possible scenario would be to start a fourth Cup car next year and put Buescher in it for a chunk of the season. It would give him the experience of running in the Cup Series in Roush’s cars, plus it would enable him to fight for the Xfinity Series title once again. The rest of the season, the team could split the car between Reed and Elliott Sadler, who joined forces with Roush this season.

The win-win situation gives two young drivers at shot at racing’s ultimate level, and enables one former Chase driver to relive his days in the Cup Series to see if he can still get the job done.

Evidently, Buescher will be in the Cup Series full-time sooner rather than later. As continues to improve, Roush will face pressure to throw him into a Cup car, and he won’t have much of a choice. The team needs a fresh face to become a leader, and that is what Buescher will be.

News and Notes for Bristol

Truth in advertising column title correction: No eyes on Xfinity.

Thanks for a great article on Chris:)