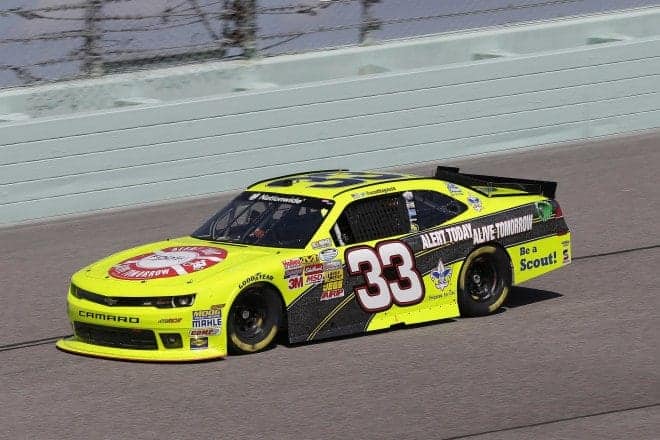 The NASCAR Xfinity Series is known as the Triple-A version of national stock car racing. Racing on the same surface as some of the greatest racers on the planet, the 33-race schedule features plenty of opportunities for drivers to work their way up to the ultimate level: the NASCAR Sprint Cup Series.

A recent report noted that Ryan Reed‘s sponsorship from Eli Lilly and Co. costs the company approximately $10 million per year – $5 million for sponsorship and the remaining $5 million for activation fees. This is nothing compared to top teams, who receive approximately $7 million alone on sponsorship. Though these are usually teams that have Cup Series piloting the cars at least part-time, it is a cost that has prevented drivers from earning ride with top teams.

Some younger drivers have found it easier than others to find funding. Reigning Xfinity Series champion Chase Elliott nearly missed out on the biggest opportunity of his career, but having a famous father and a partnership with a legendary car owner did him wonders in the search for a sponsor. However, most drivers are not as lucky to have all of the pieces put together.

When I spoke with Ryan Ellis in March of last year, he told me an entry level driver makes approximately 10-15% in the division, which totals up to about $1,500 per race. But most of these racers don’t run each week and sometimes start-and-park, which creates less hype for both them and possible sponsors.

“It is just to keep the costs of food and water, and all of that kind of stuff that you need to live off of,” Ellis said. “It is tough right now. I guess that your priorities are a little different when you are involved in a start-and-park program. In my experience, we get the car set up and that’s about it. You never get your heart invested to the race weekend. You go there – you do your job. People in the sport, they hate it. But you have to realize – drivers, crews, teams hate it just as much. They are not doing it to make a ton of money; they are doing if they are in between drivers or sponsors.”

But what has truly hurt these young drivers is the added costs of the sport. A driver such as Ellis cannot come up with funding for top notch equipment, even though they have the skill set, resume and team owners willing to do so.

Brennan Poole, who recently began his Xfinity Series career after years of struggling to find sponsorship in the ARCA Series for Venturini Motorsports, is one of the few drivers who have won races at a high level but couldn’t get a sponsor. With six wins in the ARCA Series, he proved he could become the face of a corporation, though it took five years for someone to realize his potential.

“For this to happen, I feel like it’s perfect timing,” Poole said last month. “For me, God is good. I feel like a few years ago – if I would have gone and moved up – I wouldn’t have been fully prepared. I feel a lot more prepared than I did a couple of years ago. The past few years have been really valuable to me, and I learned a lot while spotting, filming Dartfish and doing a lot of different things. Even my results on the race track over the past couple of years have showed what I have learned. Things like this don’t happen.”

Though some drivers have been fortunate enough to catch a big break, like Poole, others have not been as fortunate.

2013 NASCAR Whelen Modified Tour champion Ryan Preece, who has run a handful of events for Tommy Baldwin Racing in the Xfinity Series, failed to come up with sponsorship to race at Daytona. Racing weekly at tracks like Riverhead Raceway and Thompson Speedway, he has found a way to make some additional money besides racing on the Modified Tour, but he still needs a job on the side, which is where running the Xfinity Series would be a giant help.

“It all comes down to if you have money, and right now I’m just trying to find somebody; either investors or some sort of a partnership to get an opportunity down south,” Preece said at Riverhead last September. “I want to bring short-track racing to the big three because right now; you have a handful of guys that are grassroots racers and the rest haven’t really been to the bullrings like we have.”

And racing as a side job has become more popular than chasing it full-time. By the time drivers come up with funding for a race or two, the season has nearly come to a close. That’s what happened to Blake Koch in 2013. He raced for SR2 Motorsports, which was a start-and-park team, throughout the year. Working feverishly to find funding, he got a sponsor for one race – the season finale at Homestead. Though he had an impressive run, it developed into another season of digging to find funding, but has led for a full-time opportunity in 2015.

Then there’s a driver like Ross Chastain, whose family has connections in a world that has never been involved in racing. His family owns a watermelon farm in southern Florida and are members of key associations throughout America. This partnership led to him getting a chance in the NASCAR Camping World Truck Series, yet even after proving he can contend for wins with Brad Keselowski Racing, Chastain still struggles to find sponsorship in the Xfinity Series for JD Motorsports.

“Getting to run every race and run the whole race is really great,” Chastain explained. “It’s no secret that we have a limited budget…. I want to keep myself in a good situation for someone to pick me over another driver to fill a seat. All I can do is keep learning and stay in the seat as much as I can. I think we can take the No. 4 car and surprise even more people than we already have.”

But the experience these drivers have is priceless.

Though they aren’t making great money, they are showing up to the track. Some sponsorship deals never pass the preliminary stages. OK, maybe a lot of them don’t, but the ones that get past it are usually worthwhile. For instance, Poole’s deal with DC Solar has given him the chance to run with HScott Motorsports with Chip Ganassi. No, it’s not a Joe Gibbs Racing or Team Penske, but it’s still a multi-million dollar deal that can grow over time if he gets the job done behind the wheel.

In a division where money often buys success, it is extremely important to find sponsorship at a young age. Without NAPA joining forces with JR Motorsports after leaving Michael Waltrip Racing, JRM likely wouldn’t have fielded a full-time car for Elliott, and he probably wouldn’t have landed a sponsor as dedicated to the sport.

With the added pressure of finding a sponsor, drivers have begun to seek higher education.

Matt Tifft, a driver for Kyle Busch Motorsports and Ken Schrader Racing (the latter in the ARCA Racing Series), currently attends UNC Charlotte with hopes of attaining a bachelor’s degree in Business Management. Ellis went to George Mason University and has neared graduation at the institution.

Each of these drivers have begun to do side jobs in the event that they can’t find funding to race. It happened to Poole, when he filmed Dartfish for Richard Childress Racing and spotted for Venturini Motorsports, and the same occurred for Ellis, who helped do public relations for Matt DiBenedetto in his Cup Series debut at Phoenix.

As the Xfinity Series continues to develop into a more expensive venue for up and coming drivers, the sport will need to adapt to these changes. Instead of focusing on grassroots racing at short tracks, NASCAR has seen the division step away from stand alone events and now runs mainly companion races with the Cup Series. This has caused sponsors to want Cup Series stars in their cars, with minimal opportunities for younger drivers if they don’t have funding of their own.

Critics have pointed at drivers like John Wes Townley and Paul Menard for being funded by their fathers’ companies. But in reality, it has opened doors for them that they likely wouldn’t have had without that money.

The future of the sport is driven by money. It’s that simple. Putting food on the table is growing increasingly tougher with an economy that is still fragile globally.

Though it is tough to find Fortune 500 companies willing to sponsor young drivers, they must continue to prove that if they get the funding to do so, they can run up front. NASCAR has a much different demographic than any other sport, and it is something drivers can thrive on if done the right way.

Thanks so much! Excellent article that explains how hard it is for young drivers. When I was flying into Daytona, a woman asked me why I was going. I told her I was going to see my son drive in the Camping World race. We got into a short discussion about his future and she seemed very skeptical when I told her most drivers at the Camping World and Xfinity level were bringing sponsorship dollars with them. I think most people believe that all the teams find their sponsorship dollars and then go find drivers, when in reality — at this level — it’s often the other way around.

In AAA baseball players develop by playing against others with the perceived same skill level. In the XFinity series the development of young drivers is hindered while they serve as fodder for millionaire Cup drivers practicing for Sunday’s race, suffering with personality disorders, or who just enjoy depriving that struggling little guy of a payday. There is NO comparison whatsoever. As an aside, AAA baseball can be very interesting, the second and third tier NASCAR series not at all.

I don’t follow Xfinity races unless they’re on Fox, which is the only way I can watch them on TV. I don’t have a strong favorite driver in the series and I’m sick of the big guys beating up the little guys.

Sorry for the late column, but I just wanted to say this was a really insightful, well-written article. Speaking from past experience here, keep up the good work.